Each month, we post a series of blogs around a common topic. In this month’s series, we are excited to share some sneak peeks of NEXT Church’s forthcoming “Field Guide for Cultivated Ministry,” alongside articles and stories that reflect on the importance of mindfulness, discernment, and learning as crucial to the flourishing of ministry. We can’t wait to share the whole thing with you this fall! We invite you to share your own thoughts on Facebook and Twitter!

This phrase, attributed to management consultant Peter Drucker, captivated the heart of the business world just as torrents of new data became available. The frenzy to make sense of the entrails of their own corporate data gave rise to an army of analysts and consultants, modern-day sooth-sayers, who help leaders make decisions based on metrics. 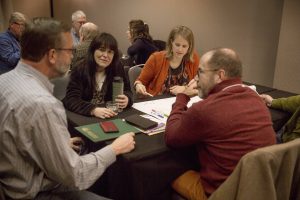 The metrics for churches have long been the ABCs: attendance, building, and cash. Pastor Jones will tell Pastor Smith, “We are a church of 500, and we worship about 250 on a Sunday.” And Pastor Smith responds, “Oh, we have 1,200 in membership, and we worship about 700.” In that common exchange, we learn three things: First, most churches have a large gap between the number of people on their rolls and the number who show up on a Sunday. Second, most churches use these numbers to negotiate power, effectiveness, and even worth, in comparison to one other, and to some degree, in comparison to the past. Finally, in the way we structure that sentence, we might just worship some of our numbers.

When we worship a set of numbers, they become our identity. We are rewarded or punished by what we believe these numbers say about us. We are a big church, a mid-sized church, or a small church. We are a wealthy church or a struggling church. We are growing, stagnating, or dying. But that’s misleading. A wealthy church can be flabby and stuck, just as a tiny church can be lean and powerful, and churches change over the years, even over a few months, just like people do.

Numbers are important. Some churches have become so discouraged with the numbers that they ignore them altogether and say, “Who cares if only 6 people came, it was faithful. Who cares if the place was mostly empty, the people who came were happy.”

We can’t disregard the numbers. Imagine if I pulled into the church parking lot after a great youth mission trip, and 20 exhausted, happy youth returned to their parents. Some parents begin to yell and scream at me: “Why only 20? Why not 25?” I grow frustrated and say to them, as pleasantly as I can, “Well, churches in our day in age are experiencing decline, culture is against us, and we shouldn’t focus on the numbers so much. The 20 who are here had a fantastic experience!” Then they’d say, “Yes, but you left here last Sunday with 25 kids! Where are our children?” Yes, that would be a different story.

Some numbers are heavier or louder than others. When we lose someone who attended for many years, it may feel heavier than when we gain someone whom we don’t know very well, at least for awhile. When we lose youth who grew up in our church, there is often grief attached to our numbers, more so than we bid farewell to the beloved family who was transferred to Iowa because of work. These numbers ask us to seek phone numbers, to make contact, to hear the longer story, to stay in touch, to follow up. They challenge us to think of the shepherd in Jesus’ parable who leaves the 99 sheep to go after the one.

Focusing only on some numbers can blind us to others. According to our Presbyterian annual statistical report, our church has lost about (well, exactly) 123 members over the last 10 years, from 850 to 727. Worship attendance has slipped from 290 to 215. That hurts. People feel that, and we miss the great saints who have moved, passed away, or gone somewhere else. And, by the way we cleaned our rolls in 2007, it looks like most of them stormed out at once.

Nowhere in our official numbers, however, are the 60 men and women who worship in Spanish on Wednesdays, nor the 50 Presbyterians who worship in Urdu on Sunday afternoons, nor the 80+ Ghanaian Presbyterians who worship downstairs on Sunday, with a jubilant drum beat that usually kicks in right after I have invited people upstairs to a moment of silent meditation. Our metrics say we have lost 123 members. Our building says we have gained 190 people per week. Who is right?

Even though these other worshippers have been historically “counted” differently, since they don’t pledge or are titled an “immigrant fellowship,” we have begun to pay attention to them. And slowly, we are becoming more of a “we,” rather than “us” and “them.” We started worshipping together on Easter, World Communion Sunday, and Rally Day. There was Fufu and RedRed from Ghana in the Fellowship Hall right next to deviled eggs and breakfast casserole. We have begun to share childcare and Sunday School. And with a new sense of who “we” are, there is a new spirit about us, and, as it says in Acts, “the Lord is adding to our number.”

Some people are with us but won’t join. Some people who join are rarely with us. Nowhere in our official statistics are the visitors who have attended for years, who have won the chili cook-off, who make food for funeral receptions, but have not joined. Nowhere in our membership are the former Catholics or Mormons who have been part of our church their entire adult lives, but fear “breaking their mom’s heart” if they join our church officially.

What about the 145 people who listen to the sermon every week from somewhere else? Who are they? I know one is my mom, but the rest? Are they truly “with us in Spirit?” Are they our extended campus? Are they our “online community?”

We need some new numbers. Jesus asks repeatedly if people had “eyes to see” and “ears to hear.” We need new ways of seeing and hearing, and assessing what “counts” in our churches and what does not.

Consider the Biblical account of the feeding of the 5,000. The number did not include women and children, though it mentions specifically that they were there. With eyes to see what was really going on there, the miracle itself is even greater than it sounds by the numbers.

What if we paid more attention to:

Paying attention to new numbers is hard. It gives clerks of session heart palpitations. The funding of much of our denominational structures is tied to membership numbers. But it is liberating and illuminating to see the bigger picture, and perhaps, we will behold a greater miracle in what we thought before were dry, stale, or even sad numbers.

“Information without action is overhead,” as Ron Griffin, the former Chief Information Officer of Home Depot used to say. The numbers should not just make us feel good, become a project in and of themselves, or sit on a shelf. They should make us better stewards of our time and efforts. They should hold us accountable and equip us to serve.

Take heart. Peter Drucker also knew that not everything could be held to the “if you can measure it, you can manage it” standard. “Your first role…is the personal one,” Drucker told Bob Buford, a consulting client then running a cable TV business, in 1990. “It is the relationship with people, the development of mutual confidence, the identification of people, the creation of a community. This is something only you can do.” Drucker went on: “It cannot be measured or easily defined. But it is not only a key function. It is one only you can perform.”

May it be so with us, dear church.

Becca Messman is co-pastor at Trinity Presbyterian Church in Herndon, Virginia.  She leads “Lunch for the Soul” – a ministry with Hispanic day laborers.  Her other passions are preaching and offering pastoral prayers, leading retreats, energizing church leaders to serve the community around them, youth and young adult ministry, and cultivating the “fear and trembling” holy journey of parenting.  She lives in Arlington, Virginia with her husband Dave, her two young children, and her dog Luna.

Cultivated Ministry at The Board of Pensions
Scroll to top