By three o’clock that Sunday afternoon, I had re-read the text message half a dozen times. Each time, discouragement shrouded me like a well-fitted pall expertly knitted together with strong cords of anger. I knew the words were well-intended, but having them appear on the screen of my phone that particular Sunday shook my faith. After all, just a couple hours earlier, I had delivered what I considered to be one of my finer sermons.

The exegesis of the passage was stellar, and the structure was well-crafted. The delivery, equal parts manuscript and extemporaneous, was empowered by the Holy Spirit. If ever there was a sermon meant for a specific group of people on a specific day and time, I felt that sermon, on that day, was it. Yet, the text message called all of that and more in question. I pulled out my phone and read it again, “Pastor Ken, I enjoy our little community. But if we want to attract more people, we need to be more relevant. And I’m certain, to be more relevant, we should talk less about Jesus.”

Are you kidding me?

The phrase played on repeat in the core of my being.

I was taken aback by the suggestion.

The words seared my soul.

I wanted to text back in all caps; “BUT WE ARE A CHURCH, FOR GOD’S SAKE.“

In my short tenure as an ordained Minister of Word & Sacrament in the PC(USA) and as a bi-vocational planting pastor of a new worshiping community that gathers in one of Charlotte’s most iconic bar and entertainment venues, I have become keenly aware that the church is engaged in a daily skirmish which pits role against relevancy.

The church I pastor knows the battle well.

Here is what we did.

We attempted to become a relevant presence in the neighborhood. 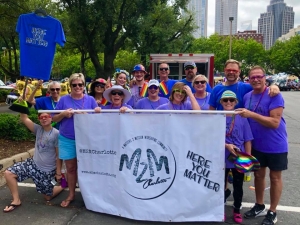 Rather than “church,” we’ve opted for the more seeker-friendly less-offensive phrase “new worshiping community.” We selected an eye-popping logo which translates well on mobile devices. We chose a catchy name that tests well in focus groups and represents the entirety of who we feel called to be. We made sure our website contained all the correct buzzwords. We put up an online giving link and will soon have our very own app.

Contextually, we designate two Sundays each month as non-preaching, community-friendly, outreach experiences. First Sunday is “Fellowship Sunday.” (We sit at table, eat brunch, share stories, sing songs, and get to know one another.) Third Sunday is “Park Bench Sunday.” (We invite community voices to share their work and listen for ways God may be calling us to join.) We’ve had open-mic Sunday, comedy improv Sunday, and concert-for-the-community Sunday. We’ve gathered out of doors for worship.

We practice inclusion at every turn. We invite other faiths to share so that we might understand their religion and beliefs. We march in gay pride parades. We partner with other non-profits to increase our efforts exponentially. We serve dinner to the homeless. We canvas the neighborhood on street clean-up patrol. We gather for discipleship training at a local sandwich shop. We give food and water to immigrants passing through out city. We meld coffee time and worship. We eat together every Sunday. We’re pet-friendly. And…we worship in a bar, for God’s sake.

How much more relevant can we get?

Yes, it is necessary to explore every avenue available to determine where God is calling us to be and how God is calling us to live the gospel in context when we get there. So, we discern: Is it church in a bar? Is it church at a skate-park on Saturday morning? Is it church on a Tuesday night with a calypso band? Is it free coffee and doughnuts on the corner? Is it church in a space where gatherers can bring their dogs? Is it cowboy church, Harley church, or late church? All of these, and more, are worth exploring. But in our quest to become a more relevant presence in the world, we must not sacrifice the role of the church.

After all, it is our role that makes us relevant. (That sentence is worth reading again.)

What is the role of the church?

The role of the church is the same as it was when the gestation period ended and the church was pushed from the womb into the streets of Jerusalem on the day of Pentecost.

“And you shall be my witnesses…”

The Greek word is μάρτυρ, which means “one who testifies.” Ah shucks. There’s that word we Presbyterians dislike and try to rationalize away. But the word is unavoidable. We are people of the book; a book filled with stories. And the stories are begging to be told over and over again! So, somebody, testify!

The role of the church is to speak a Word that cannot be heard anywhere else in culture.

The role of the church is to proclaim the life, death, and resurrection of Jesus Christ;

The role of the church is to participate in the mission of God on earth.

Please understand, I am all about being the church in the context in which we are planted. I’m all about casting a vision that unites and makes us relevant. But if, in our attempts to be the church, we abdicate the role of the church for the sake of being relevant, then we are simply engaged in a kitschy fad, one that will surely fade, and we become nothing more than the next non-profit organization down the street engaged in fundraising alongside our attempt to offer some modicum of good works.

Take heart! Shepherding a congregation through the process of discerning the balance between role and relevance is a necessary skirmish — one that leaves us bruised but beautified; sometimes disappointed but always hopeful; challenged every day but continually invigorated.

And finally, I’ve realized that throughout our discerning and being and doing, we can never speak too much about Jesus. Never! It is our role, and it is that role that makes us relevant.

After all, WE ARE THE BODY OF CHRIST, FOR GOD’S SAKE!

Rev. Ken D. Fuquay is planting pastor at M2M Charlotte, a 1001 New Worshiping Community. Ken is a graduate of Union Presbyterian Seminary and is the CEO of LIFESPAN, a non-profit that serves more than 1,300 individuals with intellectual and developmental disabilities across 23 North Carolina counties. He and his husband, Terry, live in the Charlotte area with their mini-doodle named Abby-dail.