A woman was visiting some very good friends of mine and they brought her to worship. My friend had told me that this woman was largely un-churched. Her father was an atheist, a controlling husband who forbid his wife to bring her and her brother to church. Knowing this, I was very curious about how this woman experienced our worship service. When I asked her what she thought, she responded surprisingly fast. “Kind of preachy,” she said.

I was taken aback, to say the least. I am a preacher. She was a guest in a gathering where preaching is the centerpiece of the service. My insecure, autopilot, preachy self almost kicked in. Somehow, the Spirit of God prevented me. I suddenly realized that this woman may have a whole lot to teach me. In a moment of spiritual openness I realized this woman was the kind of person that the church — disciples — was given the Holy Spirit to go and proclaim the good news to. I wanted to hear about what that was like.

We connected via email to begin a conversation where I was the student and she was the teacher. I told her I wanted to learn from her “un-churched” experience. She was very receptive. She said she had wanted to talk to someone about her experience related to the church and faith for a very long time. So often as Christians we are so afraid of offending people. We are so sure they are so hostile or so uninterested that we don’t even bother to try and have a conversation. I have learned this is hardly ever the case. When I approach others with honest curiosity about their experience and take time to listen, they are not offended or put off. They are eager to talk. 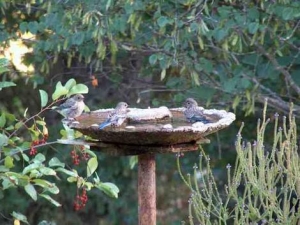 This woman had more “church” in her than I could have ever imagined. Her mother was a Christian and had an uncle who was a Methodist minister. She doesn’t remember exactly when it was but she described the event in vivid detail. Her mother took her and her brother to a forest preserve near where they lived. The Methodist minister came along. In a small clearing in the woods was an old bird bath. There in the middle of the forest preserve with the only other witnesses being birds and ground squirrels who lived there, in the birdbath, the Methodist minister baptized her and her brother. Yes. You read that right. She and her brother were baptized in a birdbath in the woods.

And that was not the beginning or the end of her story. I have learned so much from her. And I do not know it all yet! But what started out as a seemingly judgmental response about preaching turned into the opportunity of a lifetime to learn how God was at work in the life of another person who had spent very little time inside a church. I have since learned to listen more carefully, respond much less quickly, and ask as many questions as a person will tolerate. I have since learned many more lessons from the most unexpected people about how God is about the business of calling to people to experience his love and grace and mercy. And, I have learned that sometimes I am being called on to be a part of that work and sometimes I am just the student learning how it has been done. Funny thing is I think that learning this has also made me a better preacher. Ha! Who knew?!

Candie Blankman is Minister of Discipleship and Care at San Clemente Presbyterian Church in San Clemente, CA. You can visit her website to learn how this and other similar conversations have become a congregation wide ministry of listening, learning and presence called Groundings.

From These Roots: Finding the Herstory in the History

Ministry from North to South
Scroll to top