How Investor Rules in Free Trade Agreements threaten the Environment and What Presbyterians are Doing About It!

By Jed Koball and Conrado Olivera

(Editor’s Note: A previous version of this article first appeared in Sojourners in June of 2012. It has been updated to reflect the current situation.)

Two days of unrest in early August of this year along the central highway running through the Andean town of La Oroya left 1 dead, 5 shot, and 71 injured. The impetus for the standoff between a town of divided citizens and the national police was a decades-long debate about emissions standards. La Oroya is often considered to be one of the ten most contaminated cities in the world. The source of the pollution is a metals smelter that has left 97% of the children with blood-lead levels far surpassing World Health Organization thresholds. 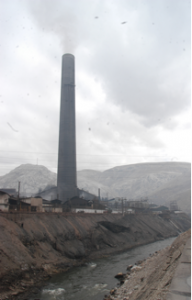 The smelter in La Oroya was emitting up to 2 million pounds of lead, arsenic, cadmium and sulfur dioxide per day at peak levels of production prior to enforcement of environmental regulations.

However, in an unconscionable move made possible by the 2009 U.S.-Peru trade agreement, it is the polluter who claims to be the victim. The massive New York-based holding company Renco Group Inc., whose subsidiary Doe Run Peru owns the smelter, filed an $800 million trade-tribunal lawsuit in 2011 against the Peruvian government, claiming it violated the company’s rights by enforcing environmental regulations in La Oroya.

It’s one of a growing wave of such arbitrations being filed all over the world by extractive-industry foreign investors. In a similar case, the transnational corporation Pacific Rim filed a $70 million case against El Salvador, after local communities and activists—four of whom have been murdered—opposed gold mining that could contaminate one of the country’s largest rivers.

The suits circumvent nations’ environmental laws by exploiting so-called “investors’ rights” chapters of trade agreements; such provisions are common in bilateral trade agreements, such as the U.S.-Peru pact, and regional agreements such as NAFTA.

In the non-transparent trade tribunals in which such lawsuits are settled, investors can sue nations, but nations can’t sue investors. Foreign investors can sue not only for profits lost but for profits potentially lost, resulting in multi-million dollar awards. In arbitrators’ deliberations, no weight is given to a nation’s constitution or laws, only to the trade agreement’s investment chapter—whose often-vague terms (such as “fair and equitable treatment”) are, at present, often interpreted in favor of corporations. This bias isn’t surprising: Arbitrators for trade tribunals such as the U.N. Commission on International Trade Law, in which the Renco suit was filed, or the International Center for Settlement of Investment Disputes (ICSID), are selected from a roster of international trade lawyers. They are not ordinarily well-versed in human rights, environmental law, or the social impact of legal rulings.

There is no right to appeal. And the investor-state lawsuit strategy is being increasingly employed: In 1996, three arbitrations started moving through the ICSID; in 2011, 38 were begun. There are presently more than 600 such arbitrations on a global scale, with the largest percentage being filed by the extractive industry.

In effect, a foreign investor such as Renco has greater rights in Peru than the very citizens of La Oroya. At present, the potential cost of an adverse judgment and the hope to find a new owner for the smelter has pressured the Peruvian government to reverse emissions standards in La Oroya to previous more permissive levels for a period of 14 years (until 2030) further putting at risk the health of the children in La Oroya. Representatives of the smelter claim that these new more permissive emissions levels are still too strict, despite them being more than twenty times more permissive than U.S. standards. 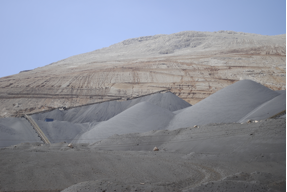 The smelter in La Oroya was emitting up to 2 million pounds of lead, arsenic, cadmium and sulfur dioxide per day at peak levels of production prior to enforcement of environmental regulations.

The Red Uniendo Manos, supported by the Presbyterian Hunger Program, together with other NGOs and faith-based groups, launched a campaign “No Greater Rights for Foreign Investors.” Inspired by the words of the prophet Ezekiel, who cried out to the King of Tyre, “in the abundance of your trade you were filled with violence and you sinned” (28:16), the campaign is demanding a reform of trade agreement chapters on investment, including a rejection of investor-state arbitration and the formation of alternative, transparent regional tribunals to handle disputes. Their advocacy (in which hundreds of Presbyterians, dozens of churches and several presbyteries are actively engaged) is presently addressing the ongoing negotiations of the Trans Pacific Partnership (TPP) a 12-nation free trade agreement including the U.S. and Peru and encompassing nearly 40% of the global economy. This work is shaped by the faith-based understanding that the moral test of the globalizing economy is whether it serves the human enterprise and creation, not just national advantage and corporate profit. 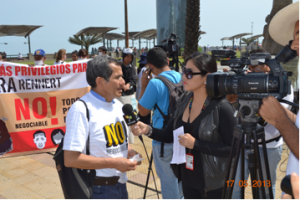 Conrado Olivera speaks to press in Lima about the impact of the U.S. – Peru Free Trade Agreement on the town of La Oroya.

Conrado Olivera is the executive director of Red Uniendo Manos Peru and Jed Koball is a mission co-worker of the Presbyterian Church (USA). Both are based in Lima, Peru. 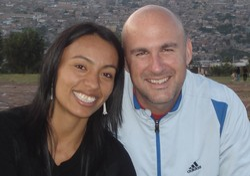 Please contact Jed at jedhawkes@gmail.com for more information on actions you can take today.

The Landscape of Liturgy: Blessing of the Plants in Worship