“And thus it is with those nurtured in Appalachia — they leave, but they look back, remembering pleasant things. The land has claimed them, and its ties will not be severed.”

— Maurice Brooks from “The Appalachians”

I heard this quote as I sat in the WVU Coliseum in Morgantown, WV for my little sister’s graduation from West Virginia University. The same venue where, a few years earlier, I had attended my own graduation from graduate school. It spoke to me then; it speaks to me now. In that time, I had already moved away from West Virginia, moved back, and was in seminary where I was pretty sure I wouldn’t be coming back. 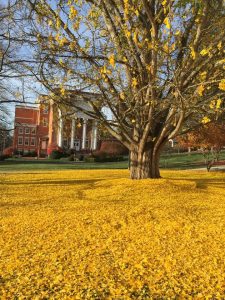 It’s odd to me that Appalachia, and West Virginia specifically, has such a tug on my life. My parents moved there when I was in college, but when people ask me where I’m from I say — without hesitation — West Virginia. (I even sing the WVU fight song to my kids every night at bedtime.) I love that place so much that I get emotional just thinking about it. Part of that, I think, is the realization that I will most likely never live their again.

My wife and I are both teaching elders in the Presbyterian Church, we are both bi-vocational, we have two young kids, and it doesn’t feel like we can make a life in West Virginia. Nor would we seek a life somewhere else in Appalachia. Finding a church or churches that could support us and/or another job to support the work of the church seems too burdensome at this point. There are a lot of reasons that West Virginia doesn’t feel like a possibility (not the least of which is we don’t feel called there): economic, cultural, political, professional. I think any one of those reasons could be overcome but, when they are all working against you, it’s difficult. Sometimes the beautiful, close knit, tight hollows can feel like a warm hug welcoming you home to the place that you belong (to borrow a phrase from John Denver) but eventually they get to feel like a vise that constricts forward movement, that chokes off innovation, that stifles creativity.

The major problem with that is I know it isn’t true. Some of the most fantastic, innovative, creative people I know are from West Virginia. I also know a lot of people who have left for the same reasons. My family lives in West Virginia and has made a home there. I would love to live closer to my parents so that they could be in the same physical space as their grandkids more often. I’d love to walk through the woods at Bluestone Camp and Retreat, where my first professional ministry began. I’d love to call it my home again. Though that doesn’t seem likely now, I know that I have been claimed by the land and its people and those ties will never be broken.

Greg Bolt is the co-pastor of the First Presbyterian Church of Red Wing in Red Wing, Minnesota. Greg is originally from the Southeast and attended Presbyterian College in Clinton, SC where he received a Bachelor of Arts in Political Science. Greg immediately enrolled in West Virginia University to study Athletic Coaching Education, where he received his Master of Science in Physical Education. After some trial and error, he entered seminary at Union Presbyterian Seminary in Richmond, VA where he met his wife Heidi and completed his Master of Divinity.

Imperative Observations from a Native West Virginian
Scroll to top