(Note: Some identifying details of those mentioned in this piece have been changed to protect their privacy.)

I remember the first murder victim whose body and family I helped care for after her death.

While working for a funeral home, you learn that people die constantly. I won’t say you “get used to it”, because that isn’t quite right. You become familiar to the oddness, the smells, the sadness. You get comfortable. You’re comfortable with death at 10:00am or 3:00am. You’re comfortable because most of the time, the bodies who you take into your care are bodies ravaged by age or sickness. You can see that their body needed to die. As a pastor, it was easy to quote the Christian commendation and say in my head, “they rest from their labor, their suffering has ended, and they have found peace.”

But then there are deaths, faces, families, for whom those words were empty, empty to the family, but also empty to me, even though my theology, my faith tells me better. Sometimes, I’m not even sure I understand the commendation until I have heard and taken on the charge and benediction.

As I looked at this young woman, maybe 20 years old, on our embalming table, I didn’t know from what she rested. Her body hadn’t been suffering. She was an innocent victim of a gas station robbery. And, I looked in disbelief at her body, her body which seemed so normal, so healthy. Her face, perfect. Her face looked just like the pictures her family brought us; a graduation party and hanging out at Rehoboth Beach, smiling big. Other than the two marks in her torso made by a knife, her body didn’t look like it needed to rest.

I cannot help but think of the funeral home who will take George Floyd’s body into their care—the people who will wash his body, stitch up his skin, who will put makeup on his bruising, and try to give his family and friends a glimpse of the life now taken. I wonder if they will step back and look at Mr. Floyd’s well-maintained muscles and striking jawline and wonder why he had to die. 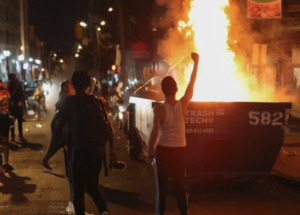 In the lingering suffering, we have commended him with protests and signs of “I can’t breathe” and anger and sermons and posts—a commendation not everyone is sure what to do with. But, now it’s time we give power and understanding to the commendation by hearing our charge and our benediction.

One of our very own youth at my church, a 15 year old young man, gave me that charge and benediction. With anger, questions, yearning, he took to Instagram decrying the horrific murder of George Floyd and he lifted up so many other names of black people who have died at the hands of racism, but what he said that called to me was: “someone please.” “please” he said over and over. “Please someone.”

In this pandemic caused by Covid, we have been willing to completely change the way we do everything. In a matter of months, we have changed our eating habits, how we shop, re-imagined our rituals, we’ve taken Communion with Dr. Pepper and Doritos, and we were willing to endure a tanked economy all for the sake of people’s lives.

We’ve had years, decades, centuries to change the virus of racism and yet, because it’s uncomfortable or maybe unimaginable or too scary or there’s too much risk or there’s too many unknowns, we’ve just let it infect every cell in our social bodies.

In my more cynical moments, I think we’ve adapted so quickly to the Corona virus because “all lives matter” and this virus threatens the lives of all people, white people, black people, Asians, but that racism only threatens the lives of people of color. In my more whole, more realistic moments, I think it’s because you can’t put a mask on racism or socially distance ourselves from prejudice language and hope to end racism. It’s more difficult than that. It isn’t as simple as choosing to wash your hands; it’s choosing to notice the things we don’t notice. It’s choosing to hear the stories of people of color. It’s choosing to realize your heart just leaped because a black man is jogging behind you. It’s choosing to wonder why white people names are seen as normal and black people names are seen as strange. It’s choosing to notice who fills our TV screens, our town halls, our best schools.

And until all lives really do matter, may we take on the labor, the work, and suffering from which George Floyd rests.

(Author’s note: As a queer, white woman I know some forms of discrimination, but it pales in comparison to systemic, prolonged racism. Rather than write about Pride for June’s Pride celebrations, I felt it was necessary to continue to write about black lives. I hope that my words help rather than harm. May we continue to see the stories that are ignored, stories about black trans lives, stories about queer POC, stories that don’t make the news and may we never forget how each story is a part of our story, if we bother to hear them.) 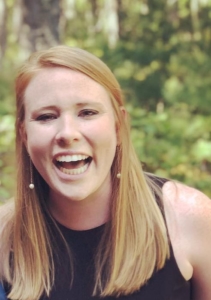 The Reverend Holly Clark-Porter is an irreverent revered who adores people, even the annoying ones. In her work, she hopes to bring people back to Church by uplifting the importance of a joyful community, the strength of working together for justice, and by giving voice to the relevancy of faithful love over hate and destruction. She has a passion for preaching, writing, and nerdy church things. Holly received her B.A. in English at Schreiner University and her M.Div from Austin Presbyterian Theological Seminary, where she was a recipient of the Charles L. King Preaching Award and a member of the Scotch Council. She has served as pastor of Big Gay Church and Calvary Presbyterian, both of Wilmington, DE. She was also a funeral director and funeral chaplain at McCrery & Harra Funeral Homes (DE). Holly and her wife, The Reverend Kaci Clark-Porter, recently moved from Delaware to El Paso, Texas, where they serve as Co-Pastors of Grace Presbyterian. They love camping, travelling the world in search of food and wine, and spoiling their pitbull, Hazel.

Holly is also a member of the NEXT Church blogging cohort and her writing focuses on how death shows up in the life of faith.

The SHIFT: It’s Time to Make That Change

Dismantling Racism and Transphobia: Leading in Love, with God Our Shepherd
Scroll to top