Since COVID-19’s appearance and the shut-down afterwards, I realized that life wouldn’t be the same for the country (on a larger scale) or for myself (on a smaller one). It has taken me SO long to really understand that the ways in which I did things pre-COVID no longer work for me now. For example, pre-COVID meant always looking at the clock. Everything was set according to a time…to go here…to go there…to do this or that. Post-COVID, time has meant little if anything since most of my days are spent at home alone.

Because of this I have had to attend to my own inner clock and establish new routines that I would not have considered earlier. When COVID first hit, I tried meditating twice a day and generally picking up more of my spiritual disciplines that had been lost along the way…like fasting or praying the rosary. What I discovered was that those spiritual activities ALONE were n ot giving me the inner peace that I thought I would find nor the connection to GOD that I was seeking for. The things I did to pass the time for COVID while sheltering in place in March and April, no longer served me when June and July hit. But August? August has been quite the eye-opener.

Being awakened in the wee hours of the morning and listening to the SILENCE during those times informed me that something more meaningful was at stake in my way of living right now that might lead into forever. In order for me to bloom and blossom where I am planted…at home the majority of the time…on ZOOM or otherwise, I had to take on new routines that gave preferential treatment to my energetic being or who I am at my core…my essence.

We often speak of being body, mind, and soul but we seldom take the time to consider the ramifications of the complexity of our human makeup. My soul, spirit, or energetic essence needed attention like my mind and body did and the usual ways of living were exercises in futility for they brought me neither the inner peace I longed for nor the creative answers I sought —and they were many. I sought GOD (the Universe or Cosmos) about becoming my “best self” during this time of mayhem. There was plenty of the not-so-good self to go around it seemed. The worse self of us all was being played out across both traditional and social media platforms.

When the Apostle Paul was in prison (writing) righting his letter to the Romans, he specifically reminded them that they were to expect nothing less than transformation from an old way of being, to a new way of being who they truly were— self-identified in the spirit and energy of Jesus the Christ. He instructed them to seek a mind-renewal which I take to mean a new way of thinking that would carry them further on the Jesus-journey than their present way of thinking. As a matter of fact, that old way of thinking is somehow a part of the old creation that is passing away, he said.

It is pretty apparent that the global uprising for which the death of George Floyd was a catalyst is NOT just about George Floyd, but about systems or ways-of-being that no longer serve most humanity. This certainly can be said for the USA, where for 400+ years lives of people of African descent have been considered somehow less than those lives of European descent. The fact that the BLM movement is so controversial to many in America, is a testament to the continuing legacy of white supremacy, and yet such a way of thinking is not life-giving to those who hold it as well as those for whom it is held against.

Enter a new way of thinking: What if we really are spiritual beings embodied in a physical reality? What if that leaves our physical reality…as just that…physical with its resulting limitations. What if we choose to believe quantum physicists who say the nature of reality is created every moment by observation and that each moment contains a myriad of possibilities to manifest in the physical dimension of reality? And what if the image and likeness of GOD which Christians contend is the basis of humanity’s creation by its Creator, is to be found on this quantum level of reality, hidden as it were as a core of LIGHT? GOD as our traditional Christian mystics have spoken often — within us. 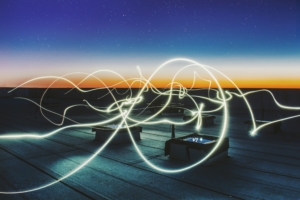 Photo by Federico Beccari on Unsplash

These kinds of questions give an entirely new meaning to what life IS as well as what it IS NOT. It certainly explains the global spirit of protest against racial injustice and government impunity. Suddenly, I could sense answers welling up out of the depths to questions we wrestle with at this time and in the place we now live. Questions about law enforcement reform, criminal justice reform, education, and racism, healthcare, immigration, and economic reforms, among others. And instead of more of the same, with the questions came creative possibilities for change.

I have no doubt at this time, having experienced only a tiny portion of my energetic essence, that a great deal of power exists within each one of us to be harbingers of more power and goodness, indeed more answers, than we can imagine. But these new ways will not arrive if we are living in the current paradigm of cause and effect and duality. This perspective is no longer useful to us for the level of wisdom and insight required in these times or the times to come. This is especially true for Christians because the government of GOD (Kin(g)dom of God) that Jesus of Nazareth proclaimed consisted of a whole new reality in which GOD, who is Spirit, manifests in this physical reality as well as beyond it.

Do we even believe that a new creation—namely we people of GOD—is possible? Do we believe the good news of Emmanuel (God-with-us)? Do we want to be changed? Are we willing to let go of who we think we are for who we are created-to-be? We are a people created to desire justice, peace, and right relationships with all of creation as we all live in the DIVINE who simultaneously lives in us?

When we take the risk to think anew of I AM as Spirit first and then embodied in and reflected throughout the rest of creation (which is quite biblical by the way), perhaps we can ask better questions with more creativity and just answers. Questions like why can’t we live with just enough for ALL instead of some hoarding most of the earth’s resources from most of earth’s peoples? I am convinced that when we begin to seek answers to such a question, we will find the Western Church on a new path more in alignment with its Founder instead of the empire which is where it has stood lo these many years.

If we continue to do what we have always done, thinking the same thought patterns, habituated in our usual ways of being and doing, we cannot possibly expect to experience life differently. The way of life for so many continue to be stratified along economic, racial, and social justice lines. But this is the physical reality we have created. Only by rising above it can we be healed of the desire to live in a cesspool of darkness and lowered expectations for life. And, yes, we must desire it for it is what we ourselves have made. If we want more and better…we must do something differently. We must awaken from our centuries old sleep of ignorance to a larger truth. The soul of future generations depends upon it. Without a new mind—all effort are simply exercises in futility.

Each one of us truly lives life as an interconnected whole although we may not be aware. Our lack of insight does not change the reality of even one person making a difference. Your change might be just the what another needs to see to do likewise. As Mahatma Gandhi has been said to have stated: “We must be the change we wish to see in the world.” Our Holy writings teach us how. Shall we dare follow our Lord in surrender to death of the old way of living for a brand-new life in this physical reality? I sure hope so.

Mission as Resistance and Struggle