Each month, we post a series of blogs around a common topic. This month, Linda Kurtz is curating a series we’re affectionately referring to as our NEXT Church book club, which aims to share insights on a variety of texts – and how they have impacted our bloggers’ ministries. Understanding that reading in and beyond one’s field is important to offering good leadership, we offer this series to get your juices flowing on what books you might read next. What are you reading that’s impacting how you think about and/or do ministry? We invite you to join the conversation on Facebook and Twitter!

After Gillette debuted their now viral ad, “The Best Men Can Be,” addressing toxic masculinity, bullying and sexual harassment, Graham Allen, a host on Blaze TV, felt compelled to respond with this photo on social media: 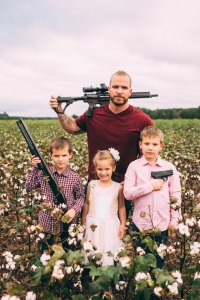 “Practicing our ‘toxic masculinity,’” wrote Allen. “Hey Gillette, does this offend you? I’ll raise my kids the way I believe they should be…thanks for your advice.”

As of this writing, the Gillette ad has over 700,000 likes… and 1.2 million “dislikes.” Many commentators erupted in outrage, some suddenly finding their inner Marxist in critiquing virtue-signalling corporatism and consumerism – critiques that are themselves are fine but strangely only erupt so passionately when the corporate signalling challenges toxic masculinity.

What about this ad causes so many men to feel threatened? What is it about the ad that, if I’m honest with myself, even I feel something deep in my core is being attacked?

In The Will to Change: Men, Masculinity, and Love, bell hooks writes about the false self men have to put up to be a “real man.” Relationships are based off of power, fear, and dominance. Men are not allowed to express their emotions, to be vulnerable – to be fully human. The self-worth of men is determined by how much control – violence and force – they can exercise on their surroundings. 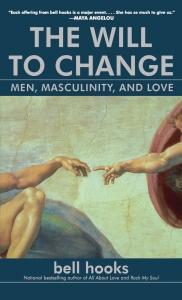 And why the lashing out if any of this is questioned? “The patriarchal manhood that was supposed to satisfy does not…to go forward they would need to repudiate the patriarchal thinking that their identity has been based on. Rage is the easy way back to a realm of feeling. It can serve as the perfect cover, masking feelings of fear and failure.”

Men, hooks argues, are taught they have to be right or they have lost their manhood. Instead, we need to show men that true strength doesn’t come from performing perfection, but the capacity to grow – the will to change.

As a pastor, I am increasingly conscious of how patriarchal norms affect my own leadership norms. I have experienced pastors who charmed with charisma that bled into emotional manipulation, that feigned a lack of hierarchy until any call for accountability would cause him – it’s always a him – to suddenly pull rank as the ordained holy man. Rachel Held Evans said on social media that she felt church growing up for her boiled down to men talking at her. Is this the best a pastor can be?

Reading The Will to Change challenged my pastoral leadership to the core. Yes, it’s ok to admit that I messed up, and that I need to be held accountable. Yes, I do need to do the emotional work of seeking consent and hearing people’s criticisms and objections rather than going at it alone like a cowboy. Yes, I can still be decisive and impactful and mold consensus rather than simply follow it, while also being gracious and gentle. And yes, I need to listen to and empower women.

The book also made me grateful for the church I pastor at now, and for the leadership of head pastor Rev. Patrick O’Connor, a Metro IAF community organizer who is very much a respected leader while valuing relational over dominance power, pastoral care, constructive criticism, and who always challenges me every time I want to start something – “but did you form a team?”

I feel bell hooks calling me to be a better pastor, especially for the men and boys who need to see another way of being a man. After all, isn’t acknowledging the need for growth and the will to change at the heart of Christian discipleship?

Christopher De La Cruz is the Associate Pastor at First Presbyterian Church in Jamaica, Queens, NY. De La Cruz has written for NEXT Church, the Presbyterian Outlook, and Princeton Theological Seminary’s “The Thread.”

Editor’s note: Christopher is facilitating an online book discussion on “The Will to Change” on Tuesday, July 16. We invite you to join the conversation! Learn more here.

You, Me, and White Fragility: Open Letters from the NEXT Church Co-Chairs

Intentional about the Good
Scroll to top