When I was attending a seminary class years ago, a professor ended the lecture with a statement that stuck with me. The final moments of this class had moved all of us into a discussion on prayer. One student finally asked the professor, “If you could summarize the theology, mystery, and practice of prayer in one sentence, what would it be?” Yes, I thought, good question. Without missing a beat, the professor said, “The most important thing I have learned about prayer from study and practice is this: simply show up.”

Simply show up. At the time, these words seemed, ironically, too simple. Yet after years of living as a pilgrim, I get it. We need to keep showing up and praying…again and again and again. Show up, do it, and trust God. 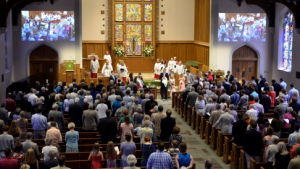 After eleven years of working in stewardship ministry, one of the greatest lessons I can pass on to those hoping to become leaders of stewards is, in the words of my seminary professor, simply show up. There is much to be learned about stewardship ministry: the asking, teaching, preaching, mentoring, as well as the storytelling, reading, writing, and team-building. But to show up again and again is at the essence of practicing the leadership.

On multiple occasions, I have worked with pastors or lay leaders, who, when looking to practice more intentional stewardship leadership, have shared some reservations due to perceived lack of skills and lots of fear. Sometimes it is obvious that the fit is not right. For some, it is simply not time for them to lead.

But for others, as they are discerning a call, I often counsel for them to show up and just to do it afraid. The more immersed they are in the work, the less afraid they are of it. As in the case of Moses and others who have taught us how to live faithfully, the way forward is to trust God that all will be provided. We simply show up, read what we find, write and preach what is inspired by Scripture and sacred conversation, live what we are learning, and lead others through the courage that God provides.

Showing up is a practice of prayerful attentiveness. We show up, committed to leading in the ways that God shows us to lead. We show up with our strengths and weaknesses, our convictions and concerns, our hopes and worries. We show up as we are and expect God to be with us along the way and for the Kingdom to come and God’s will to be done. Over the years, I have watched many people show up in stewardship ministry and begin leading. What did they do? What did they learn about becoming a leader of stewards?  What happened to them along the way?

The first step on the journey of leading stewards is simply showing up. It’s about saying yes. Yes to the opportunities, invitations, and resources God will provide for the leadership. This is what the above leaders have learned, and what many more will learn as they humbly, courageously, and faithfully show up again and again and again.

Sean Mitchell is the Stewardship Development Director at Myers Park Presbyterian Church in Charlotte, North Carolina.  He is also the founder of Generosity Development. Sean works closely with churches to develop annual and capital campaigns, major gifts, and planned giving.

Every faculty you have, your power of thinking or of moving your limbs from moment to moment, is given you by God. If you devoted every moment of your whole life exclusively to God’s service, you could not give God anything that was not in a sense God’s own already.
– C. S. Lewis, Mere Christianity

For us as Christians, all that we have and all that we are belongs to God. So then what does stewardship look like in our lives today? How do we define stewardship? 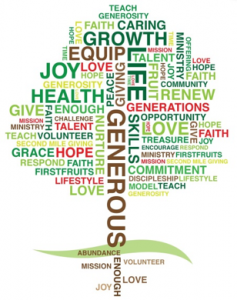 Too often stewardship means the Annual Stewardship Campaign. It means filling out a pledge card to make a commitment to the annual budget of the church where we are a member. In some cases, the definition has been broadened to include a commitment of our time and talents so that we don’t put all our focus on money.

As we begin a month of reflections on stewardship, it seems the best place to begin is to ask, “What do the scriptures tell us about stewardship?” I share these biblical principles of stewardship for you to begin to broaden your definition of stewardship:

Ownership – Let’s begin with the first verse of the Bible: “In the beginning when God created the heavens and the earth…” God created everything! In Psalm 24 we read, “The earth is the Lord’s, and everything in it, the world, and all who live in it.” God is not only the creator but also the owner of everything. The biblical teaching is not that God created everything and then handed ownership off to us or someone else. God still owns all that is.

Responsibility – Once we acknowledge that what we have is God’s, the question becomes: “What would God have me do with all of this?” As God’s stewards, we are responsible to care for all that God has graciously entrusted to us. “Who then is the faithful and wise steward…?” (Luke 12:42) A steward is a person who cares for something that belongs to someone else. The steward is not the owner, but instead manages that which belongs to another. All that surrounds us in this life belongs to God, and we have been given the privilege to manage and care for some of it as we travel through life.

Accountability – One day each one of us will be called to give an account of how we have managed what God has given us. In 1 Peter we read, “Like good stewards of the manifold grace of God, serve one another with whatever gift each of you has received.” (1 Peter 4:10) As God’s people, we are called to live and give generously, especially to help those in need. We are called to give first to God and God’s work, to give regularly, and yes, to give cheerfully. The Bible tells us that what we do with our money and possessions impacts our faith. We are called to be accountable for what God has entrusted into our care.

Reward – Stewardship is the way we use the abundance that God has entrusted to our care to love God and our neighbor. Stewardship is more than money, offering plates, and pledges. As the master said to the servants to whom he gave five talents and two talents, “Well done, good and faithful servants! You have been faithful with a few things; I will put you in charge of many things.” (Matthew 25:21) They used what they had been asked to manage and multiplied it for the good of the master and his kingdom.

Stewardship goes beyond the church budget or building project and connects everything we do with what God is doing in the world. Stewardship is a way of life. It is one of the primary ways that we live out our identity in Christ. We are called to be faithful stewards in all that God is calling us to do. It is being open to the opportunities and challenges that God places in our lives and serving with faith and joy.

Stewardship is a spiritual practice that allows us to live out the belief that all we have and all that we are belongs to God. Stewardship is our gifts of time, relationship, worship, thanksgiving, prayer, service, and material possessions. It is a way of living that includes giving.

Deborah Rexrode serves as the Associate for Stewardship with the Presbytery of the James. She is an ordained Elder in the Presbyterian Church (USA) and brings to the presbytery a background of research, study, and application of the theological understanding of stewardship and the importance of ongoing stewardship education in our congregations. She provides consultation to pastors, sessions, and stewardship committees with stewardship campaigns, capital campaigns, and planned giving. Deborah has an M.A. and a Ph.D. in the Sociology of Religion from the University of Virginia. Her research and doctoral dissertation focused on stewardship and the role of clergy in providing strong financial leadership in their congregations.

Description: Is your congregation’s approach to stewardship stuck in a rut? Are you living in a state of scarcity and longing for abundance? This workshop will outline a program that has moved churches from a four-week stewardship campaign to a year-round culture of generosity. Learn how to form your Generosity Team, how to create an activities calendar for your church’s funds ministry, how to prepare a narrative budget, and how to integrate all aspects of your church into the life of generosity.

Here are the resources Robert provided during the workshop: