As I approached the checkpoint for the first time, I could feel my anxiety rising. The uniformed guard said, “Passport.” Not as a question, not as an invitation, but rather as a requirement for me to pass unharmed. It is hard to tamp down the fear as one approaches an armed representative of a government which is not one’s own, in a place where all the rules are not transparent nor equally enforced. As I moved beyond the checkpoint, I could feel my anxiety ebb. The moment of fear had given way to encounters with new acquaintances that would prove full of good will. I would pass through Checkpoint Charlie between East and West Berlin five more times before the wall fell in 1989. 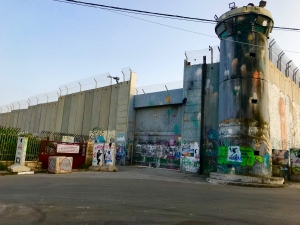 The wall that divides Bethlehem from Jerusalem and surrounding areas looks strikingly like that earlier wall that had so terrified me. It is twenty-five feet of vertical concrete topped with razor wire. Every so often, a watchtower looms with armed guards protected from view, but not from seeing. On the Bethlehem side are intricate, amusing, and sometimes profane graffiti paintings. The west side of the Berlin Wall was likewise adorned.

The Israeli checkpoints have the same feel as their Cold War antecedents: young military guards with automatic weapons. As you approach, you hope they are busy or bored and not feeling aggressive or confrontational. The latter is always a risk as research shows that simply the presence of weapons significantly increases aggressive cognition, hostile appraisals, and aggressive behavior.[i]

The Israeli settlements in the West Bank also have checkpoints. They were not as I had pictured them. Somehow my mind had constructed an image of single story homes on small lots with communal agricultural space. Perhaps I had melded the idea of kibbutz and settlement. In contrast to that bucolic misrepresentation, they are extremely dense, urban populations up to 60,000 people with schools, businesses, and public spaces. They can function as suburbs with commuters driving to work in larger cities. Like Bethlehem, they have fortified perimeters made mostly of fencing with barbed wire. Any entry requires scrutiny at the military checkpoints. Unlike Bethlehem, they are not trying to keep the population in, but to keep a perceived threat out.

The common element on both sides of these barriers is fear.

In Jaffa, the seaside suburb of Tel Aviv, there exists a striking contrast to the West Bank. We American Christians strolled the promenade with a mass of humanity that clearly included Arab Muslims; Arab Christians; and Liberal, Conservative, and Orthodox Jews. No one seemed threatened or fearful. A wedding reception was beginning in one of the local establishments. Couples strolled the beach in the fading light. There were no checkpoints to navigate, no fences to separate, and no weapons to brandish.
Israel/Palestine is a complicated place with profound geo-political implications. After having spent only a week meeting people and encountering many contrasting ideas and perspectives, I would not presume to offer any solution to the current political problem. But it is a political problem. Leaders on each side demonize the other and ascribe the worst intent, often inciting violence from their constituents.

What I can say is this, walls and fences guarded by armed soldiers have never created peace. At times, it may create the illusion of security for one side, but that security is a falsehood. Walls and fences cannot keep out resentment of those on the side of less power any more than they can keep in the fears of the ones supposedly protected. The narratives about the enemy on the other side of the barrier grow and are expanded with each generation that lives unnaturally divided.

Perhaps what Christianity has to offer to the peace process is this: we believe in a God whose reconciling action with humankind was to accept complete vulnerability and “move into the neighborhood.”[ii]

When people build relationships through personal engagement, hate and fear tend to dissipate. Our commonality as children of God is more profound than our superficial differences. Engaging the faces of our fear is perhaps the only way to face that fear.