I first started running as a teenager to replace feelings of insecurity with hope. It also fed the need that all of us have to belong and to be accepted. Running gave me a sense of belonging to something greater than myself – much like a church community. It also helped me to relieve stress, deal with my emotions, and generally balance out my life. I have always believed that running develops happier and healthier children. It demands that you bring your best attitude and a positive spirit. Running does not respond to status or appearance, just a big heart and good energy. 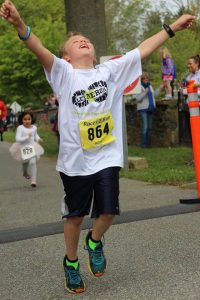 When I saw the imbalance of society’s stereotypes on young boys, and the power that running had shown me, I had a sense that running would be a good vehicle for boys to experience, camaraderie, emotional balance, and their God-given potential.

The initial idea for Let Me Run came when I had boys of my own. After becoming a mother and seeing what I had seen in my boys, I was sure that there was something more to being a boy than what society was telling me. What I was seeing did not match with what I was hearing, and I wanted to fix that. For practically my whole life I had been hearing things like, “Boys will be boys” or “What did you expect? He’s a boy!” But I knew that boys were capable of so much more. They aren’t all ruled by testosterone or incapable of growing as people. As a parent it is hard to sit back and watch the ‘Boy Code’ in action. From the ball fields to the office, limiting messages are being sent to males. You’ve heard them: grow up, be a man, suck it up, boys don’t cry, don’t be a sissy, stop being a girl, and always be in control!

I always seemed shocked by these comments, as I know that my boys far surpass me in their caring actions, integrity, and self-control. I became more aware of societal expectations of boys and of men.

I kept thinking about my caring, compassionate, and tough boys. Would they be able to stay spirited and full of wonder?

I want so much for children to be free to experience joy and live into their God-given potential. I want this so much that I created Let Me Run. Let Me Run inspires boys through the power of running to be courageous enough to be themselves, to build healthy relationships, and to live an active lifestyle. The program started with 14 boys in Charlotte and has now served 11,000 boys in 23 states. The volunteers for Let Me Run believe in servant leadership. It is often their faith that brings them to give back through Let Me Run. Seeing their faith in action causes a community to be drawn to such people and learn from their example.

Perhaps the greatest gift in Let Me Run is being side by side with a boy sweating, panting and listening to his boundless thoughts, fears, and dreams. It is sacred to sit with a group of boys after a run and hear the depths of compassion and empathy that our boys are capable of. We get to see boys, “feel more alive,” walk a little taller,” and turn jitters into accomplishment. We get to see what happens when boys are given permission to come together and be themselves. They choose to lift each other up instead of tear them down. They choose to see success for their teammates as improvement. They meet each other right where they are in the moment with no expectations other than to bring your best self. When given permission they naturally create an atmosphere of acceptance and belonging and that is exactly what Christ wants for our community of faith.

Ashley Armistead graduated from Wake Forest in 1991 with a degree in exercise science and University of Delaware in 1995 with a degree in nursing. She spent time working in cardiac rehabilitation and pediatric nursing. While raising her boys, she worked as a school volunteer and with mission and youth at Welwyn Presbyterian Church in Charlotte, NC. In 2009, Ashley founded Let Me Run in Charlotte, which is now in 23 states. Her passions are running, reading, youth sports, and not cooking. 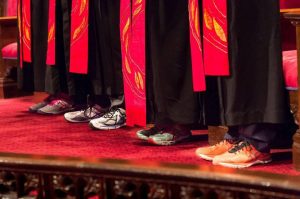 I never saw the point of running for the sake of running. As a high school and college athlete, I was motivated to run in order to get the ball away from another player, or to keep her from getting the ball away from me. Running served the purpose of conditioning me for my sport, keeping me strong and fast and full of endurance on the field. But running in and of itself was not a sport. I held firmly to this belief until the last game of my senior year in college, when I had to turn in my uniform and I was left wondering how I could consider myself an athlete any longer. It felt like this part of myself I had identified with for the past 16 or 17 years, through awkward middle school years and late adolescence, through relationships and new landscapes, was being shed forever as I pulled my jersey over my head for the last time. The structure of a season and daily practices was gone, and the connection to others who were all putting themselves out there for the same goal, pulling in the same direction, was lost. As the time clock counted down and blared its caustic horn, I felt empty.

And so I ran. I ran through the quiet cemetery in my tiny college town, and farther out through the farmlands and pastures. I ran to clear my head, to trick my mind and my body into thinking I was still an athlete, even though there was no one to chase and no one chasing me. I ran farther and for longer, as I contemplated a strange sense of call by God, as I moved to new places knowing no one, in a hesitant attempt to serve God and love God’s people. I ran to connect with myself and disconnect from the noise and the needs of others. Without realizing it, not only did I see the point in running for the sake of running, but along the way I had become a runner. And somewhere in the midst of the miles, I realized that running was prayer and sacred and holy, and that it makes me a better person and pastor, parent and partner.

More often than I would like these days, my runs happen at odd times, in the darkness of one end of the day or the other, or while pushing a stroller filled with a child or two. But the feel of my feet on the pavement and my breath in my body, reminds me that God created me not just for sharing God’s love and justice with the world. I am affirmed in knowing that God created me to live and move and have my being, finding my best self in the midst of the chaos. For me, running is God’s invitation to listen to the world around me, to take care of myself so I can care for others, and it is God’s reminder not to chase or to be chased by the things of this world, but to place my footfalls in the rhythm of God’s steadfast love and grace for all.

Meghan Gage-Finn serves as Executive Associate Pastor at Westminster Presbyterian Church in downtown Minneapolis. As a triathlete and veteran marathon runner, including the fabled Boston Marathon, she has found this valuable training for both ministry and keeping up with three children, age 5 and under.

Each month, we post a series of blogs around a common topic. This fall we’ve asked a number of leaders to respond to the question, “What is saving your ministry right now?” Amanda Pine is one of our workshop presenters for the 2016 National Gathering. Learn more about the workshop at the end of this post. We invite you to join the conversation here, on Facebook, or Twitter!

November and December always pass by in a blur of gift wrap, family gatherings, and huge church events. While I keep my Sunrise calendar on my phone (best app ever, seriously try it!) updated with the various work and social engagements that stack up in the holiday season, the stress that comes along with getting the perfect presents and planning the perfect Advent event cannot be managed by an app. My outlet for releasing stress this holiday season is running.

I have signed up for a ten mile race in February, and while that is by far the longest distance I have ever run, the training process has proved to be the greatest stress relief this winter. As part of the process, I have started running three days a week. My time running allows me to collect my thoughts, take time for myself, and nurture my body in a time that is overridden with stress. Exercise has become a part of my spiritual practice and the saving grace of my ministry this holiday season!

Amanda Pine lives at the oceanfront in Virginia Beach, Virginia with her husband and cat. She is a seminary student at Union Presbyterian Seminary, and is currently serving as Director of Christian Education at Great Bridge United Methodist Church. She is co-leading a workshop entitled “Youth Ministry Beyond the Bubble” at the 2016 NEXT Church National Gathering.