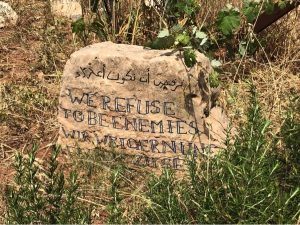 With the sun already beating down, we pilgrims stepped out of the climatized comfort of our tour bus and onto the sacred hundred-acre ground where the Nassar family has cultivated fruit trees for the past century. Known as the Tent of Nations, the land overlooks the walled-off city of Bethlehem, where Jesus was once born into occupied rule. The entryway is surrounded by stones painted in the languages of many nations, which proclaim a central message: “WE REFUSE TO BE ENEMIES.” There, Daoud Nassar welcomed and shepherded us into the shady shelter of one of the property’s many caves.

The caves are among the Nassars’ many creative responses to 28 years of state-issued threats to confiscate the land they have long called home. Perched on the only immediate hilltop yet unoccupied by Israeli settlers, Tent of Nations is prime real estate. If not for the family’s property deed and constant land cultivation, the Israeli state would have claimed their acreage for settlement expansion long ago. As it were, the state has resorted to repeated disruption and intimidation tactics. Government officials have eliminated access to water and electricity, issued demolition orders for structures existing above ground, razed orchards, and obstructed the main access road, all in an attempt to drive the Nassars from their land.

The Nassar family might have chosen to become victims, but that it not what they did. Instead, they chose a path of creative, nonviolent resistance. They chose to navigate the court system, even at great personal expense. They chose to install solar panels, to collect rainwater, to make room in caves, and to partner with people across differences to fill their demolished fields with trees that will only bear fruit with patience and care.

If survival were the goal, the Nassars’ chosen responses would make little sense. With settlement boundaries creeping ever nearer to their property, it is hard to imagine the family will be able to remain there forever. Eventually, they — like so many of their neighbors — will be displaced. 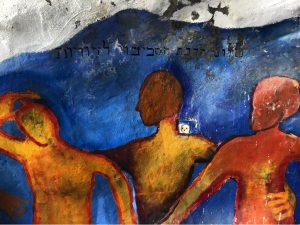 Inside one of the caves on Tent of Nations property, multiple languages convey some of the core values: “justice, peace, and the conservation of creation.” (Julia Watkins)

But, the Nassars are not moving in the direction of survival. They are taking one step at a time toward bringing the entryway stones’ central message to life. They are refusing to be enemies, instead, choosing a path that dignifies their persecutors as well as their supporters around the world. The Nassars are moving in the direction of life to the full, even if it costs them everything they have.

As pilgrims on our journey toward wholeness, it is tempting to measure our progress by how far we think we have come. We might look to facts and figures to assure us we are on the right path, and to a certain extent, those numbers matter. When we look to the future of the church, it matters that there are people in the pews. It matters that we meet our stewardship goals. Even more, it matters that everyone has equal access to housing, food, healthcare, education, and beauty. Still, if we place our hope in outcomes alone, we will be bound for bitterness and despair. At the end of the day, there will always be more work to do. On the path to justice, we will not find our hope in the outcomes but in the resistance. When together we resist a narrative that ends in death, we — like the Nassar family — join our Risen Lord in life beyond measure.

Originally from Atlanta, Julia Watkins is delighted to have recently returned to the South, where she currently serves as Pastoral Resident for Mission & Outreach at Covenant Presbyterian Church in Charlotte, North Carolina.

Last fall, after much cajoling from my children, we spent an afternoon at Cox Farms for their fall festival, a beloved institution here in Northern Virginia. I say “cajole,” because after many annual pilgrimages when my children were younger, I was ready for some new autumn traditions for our teen and tweens. But they are adamant about going. For them, it’s a connection to childhood and a pleasant place to be together as a family. (I suspect the giant cylindrical bags of fresh crisp kettle corn can’t hurt.) 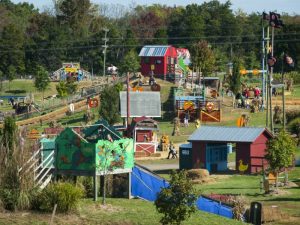 Thanks in part to my connection with NEXT Church and our emphasis on inclusion and diversity, I like to look around the places I go to see how racially and culturally diverse they are. Who is here? Who is conspicuously not here, and why might that be? That day last October, I noticed way more people of color at Cox Farms than I ever had before. I couldn’t be sure whether the demographics of the clientele had actually changed, or whether I was seeing with new eyes groups of people who were always there… but the difference was striking.

It was only later that I found out about Cox Farms’s tradition of feisty signage. It began many years ago with two rainbow flags flying over the hay-bale tunnel. Then, a Black Lives Matter sign in the window of the family home, followed some time later with a message on their marquee expressing love for their immigrant neighbors. Again, I’m not privy to Cox Farms’s statistics on clientele. But it stands to reason that in a culture in which whiteness is considered the default, historically marginalized populations won’t simply assume they are welcome somewhere unless they are explicitly welcomed. I couldn’t help but think of the church: what topics we take up together, what remains unspoken, and how we express our welcome. If we’re not specific and heartfelt in our language, if we rely on generic words like “all” and “everyone,” our message will not get through. It’s too easy for “everyone” to be followed by an implicit “…who looks like me,” especially when the community and its leadership are homogenous already.

This month’s focus for the NEXT Church blog will be on the Sarasota Statement, which we unveiled a year ago and continue to promote for use in our congregations and communities, along with the accompanying study guide. You will hear from a variety of voices and contexts throughout March, reacting to phrases in the statement, and sharing ways it is being used. 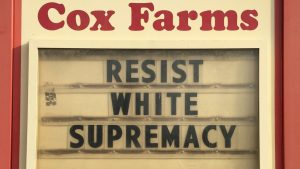 There are many themes woven into the statement — the nature of Christ’s kindom; the need for the church to be a vehicle of change — but a major theme is our call to dismantle forces of oppression, notably systemic racism. And guess what? Cox Farms took on that one too, with a sign a couple of months ago that said “Resist White Supremacy.” It didn’t take long for some folks to respond with angry letters and calls for a boycott. Thankfully, the overwhelming majority of comments and messages on the business’s Facebook page were positive (and I vowed never again to push back on my kids’ nostalgic desire for hayrides and fresh-pressed apple cider).

The Cox family was baffled by the negative response. As an article in the Washington Post put it, “Who, other than a white supremacist, would be offended by a message condemning white supremacy? [The family] also understood, though, that this is America in 2018, a time of such fierce division that even voicing opposition to the ugliest beliefs could be twisted or taken out of context.”

I am not so coy as to pretend there isn’t political resonance in words like “Black Lives Matter,” “resist,” and “white supremacy.” That doesn’t mean that the church should avoid them, but should lean into them even more. The church is a unique institution, ideally suited to talk about these matters in a deeper way, in communities that pledge to be with and for another not because we agree, but because we are united in Jesus Christ. If tough topics make us recoil, it’s probably because we’re feeling implicated, and that’s never a comfortable feeling. But our bristling may also be a sign that we haven’t talked about them enough. We need to push into that discomfort; otherwise we will never change and grow. The Sarasota Statement provides language — and the study guide, a framework — that allows for such faithful proclamation and exploration. Onward.

MaryAnn McKibben Dana is a writer, free-range pastor, speaker, and leadership coach living in Virginia. She is author of the forthcoming God, Improv, and the Art of Living, and 2012’s Sabbath in the Suburbs. She is a former chair of NEXT Church’s strategy team, and was recognized by the Presbyterian Writers Guild with the 2015-2016 David Steele Distinguished Writer Award.