Each month we assemble a series of posts around a particular theme. This month, we’re curating a conversation around leadership cohort groups that sustain people in ministry. Have ideas or reflections to share? Offer your thoughts in comments, on our Facebook page, or contact us here. If you like what you read, subscribe to our blog (enter your email on the right sidebar) and receive an email when there is a new blog article. To see all that has been written on this topic, go to the blog main page.

The US Congregational Life Leader Survey found that pastoral leaders who participate in peer learning are more engaged in their own self-care and development.[1] Ministers who take a day off regularly are twice as likely to be involved in a peer group. Those who participate in continuing education are more than five times as likely to be involved in peer learning. Pastoral leaders in peer groups are also twice as likely to say that maintaining a private life separate from their work is “no problem.” What’s more, the relationship is two-way. 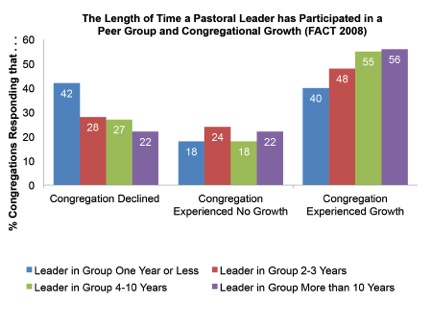 A pastor’s involvement in a peer group makes a difference for their congregations.

The Faith Communities Today Survey found that pastors in peer groups lead congregations that are highly participatory. Three-quarters of ministers in a peer group report that leadership roles are shared among laity in their churches. And we see how this works in chapter 3, where we hear the story of a Church of God minister who learned to share leadership in his peer group. When he used a more facilitative style of leadership in his own church, he was amazed at the positive results. But the story is quite different for pastors who aren’t in peer groups. In close to half of their congregations, leadership isn’t shared very much—the same people tend to serve in the same roles.[2]

A culture of involvement extends to youth and new members. Nearly twice as many pastors in peer groups report that youth serve on church committees and boards.[3] Their congregations are also more likely to involve new members in worship and in service to the church and the community.[4]

Pastors who participate in a peer group are more active in their communities.[5] So are the congregations they lead. Their churches are more likely to see themselves as change agents and strongly emphasize community service.

Several of our peer group approaches are intentional about community involvement as a part of their experience, such as Lott Carey’s cross-cultural pastoral immersion model. Seattle’s School of Theology and Ministry showcases stories of peer groups whose members are different from one another in every conceivable way and who through deep listening and mutual discernment become true companions in leadership. Interpersonal change leads to congregational and community change. The Seattle project’s intent may not be to change communities, but in many cases that is indeed what happens.

Pastors in peer groups lead congregations that are committed to clergy continuing education.[6] Their churches are more likely to require it and help to fund it. Many of the pastoral leaders profiled in this book serve congregations that contribute financially to their peer group experience.

So a pastoral leader’s participation in a peer group leads to congregations that are highly participatory, supportive of the minister’s continuing education, and active in their communities.[7] These are important signals of health in congregations. Another indicator of health is numerical growth.

[1] These are the results of logistic regressions that calculate the odds of being in a peer group as well as taking a day off, participating in continuing education, and maintaining a private life separate from their work.

[7] We know that “correlation is not causation.” So we created and tested models (logistic regression) for predicting participation in congregations, community involvement, and support for clergy continuing education. We found that a pastoral leader’s participation in a peer group predicted congregations where laity rotate in leadership roles; small groups are emphasized; new members are assimilated through service to the church and the community; the congregation supports and requires continuing education; and the pastoral leader spends more time in administration, supervision, and representing the church in the community.

[8]Since its first administration in 2000, the FACT Survey included a question about average worship attendance in the last six years, in this case, from 2003 to 2008. Respondents are asked to record these numeric averages by year. A “growth” variable is created by calculating a percentage change in attendance over the five–year period of measurement and then collapsing the measure into categories. The data in the chart reflect three categories: “congregation declined” is a five–year percentage decline in attendance of 5 percent or more; “congregation experienced growth” is a five–year decline or increase of less than 5 percent; and “congregation experienced growth” is a five–year percentage increase in attendance of 5 percent or more. When the growth variable is correlated with the survey item about the length of time the pastoral leader participated in a peer group, the results are definitive. Again, in order to determine whether a pastoral leader’s participation in a peer group predicts congregational growth, we created and tested a logistic regression model that included factors known to be related to church growth.