Tiffany Jana and Matthew Freeman co-owners of the TMI consulting firm based in Richmond, VA, present a keynote at the 2015 National Gathering in Chicago.

Jeff Krehbiel is one of the Paracletos coaches who will be co-leading a workshop on the learnings thus far in this church revitalization project.

Church of the Pilgrims is a small, historic, largely young adult congregation in the Dupont Circle neighborhood of Washington, DC, with a long history of social justice, and a recent history of creative worship.

2.     Where have you seen glimpses of “the church that is becoming”?

In Epiphany, we asked four members of our congregation to preach, telling their own journey of faith and vocation. They were beautiful and awe-inspiring. It’s only when pastors get out of the way that liturgy truly becomes the work of the people.

My passion is helping people discover their own agency—as leaders, as citizens, as disciples.

4.     What is one thing you are looking forward to at the NEXT Gathering?

Being inspired by great stories of churches doing bold things, and being with beloved colleagues (OK, that’s two things).

5.     Describe NEXT Church in seven words or less.

Living into the church that is becoming.

Mark Ramsey has been the Senior Pastor at Grace Covenant Presbyterian Church in Asheville since 2006, after serving churches in Illinois, Colorado, Michigan and Maryland.  He is a graduate of the University of Virginia and Princeton Theological Seminary.

Kristy Farber has been the Associate Pastor at Grace Covenant since 2010.  Prior to that she directed a college ministry in Washington state and taught high school English.  She has an undergraduate degree from the University of Washington and graduate degrees from Seattle University and Princeton Theological Seminary.

Together, they are offering a testimony and workshop on leadership for congregational transformation.

Grace Covenant is a growing, fairly traditional (by all outside appearances) congregation located in Asheville, NC in the middle of the last area of the culture that hasn’t got the memo that Christendom is over (bless our hearts, as we say down here…)

Most every time we gather—either for worship, to work in our community garden, or especially last Sunday when we had our latest version of  “real.life.stories”—a first person storytelling event held in the restaurant/bar across the street with six people telling stories around the theme “Misunderstanding.”

Ministry is all about collaboration.  There’s not substitute for relationships in ministry.

5. Describe NEXT Church in seven words or less.

Each month we ask a different person from the NEXT Church community to assemble a series of posts around a particular theme. This month, Karen Sapio has been curating a conversation around ministry in long established congregations. Have ideas or reflections to share? Offer your thoughts in comments, on our Facebook page, or contact us here. 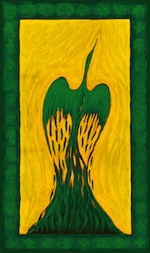 In a follow-up to his family’s wildly successful “Christmas Jammies” video, Penn Holderness recently released “Christmas Jammies, part 2”  in which he laments the disconnect between the hipster ensemble his wife gave him for Christmas and the realities of his middle-aging body.  Go ahead and watch it. I’ll wait… http://www.youtube.com/watch?v=WAUtzBRLUrk

I have to admit that when I return from NEXT Church conferences and regional gatherings, I often have something like the refrain from this video buzzing in my head:  They looked so good on that guy from the Internet—but they don’t look so good on me…”

It worked so well for that speaker from the NEXT Conference–but that won’t work so well for me…..

NEXT conferences often showcases fantastically creative ministry startups, or formerly dead congregations rising phoenix-like from their own ashes.  The host churches for the national gatherings have all been large, vital, resource-rich congregations able to support their current ministries with funds to spare for experimentation and innovation.

Like many who are inspired by NEXT Church’s vision, however, that’s not where I live.  I am pastor of a medium sized congregation with about ⅔ of the members over age 60.  In another year we will celebrate the 60th anniversary of our founding.  We can just about make the budget work most of the time, and we are keeping an anxious eye on our small cushion of reserves.  We are not in immediate crisis, but it is becoming clear to those who are paying attention–and there are thankfully a number of those attentive, faithful people–that the current trajectory is not good and that our current strategy of hopeful tweaking is not enough.

I attend NEXT Church gatherings and wonder: How can we generate the energy and excitement of a start-up when we are a long established institution?  How do we foster the kind of urgency and focus that attends a true crisis of viability when we’ve got enough resources to maintain at least some semblance of the status-quo for another decade or so? How do we find the imagination and resources to operate in two worlds: the traditional church we’ve inherited and the new form of church we need to create, especially when we feel like we’ve got barely enough people and money to keep one world afloat?

During February the NEXT blog hopes to foster a conversation around these kinds of questions.  How do we bridge that disconnect between what works for the kinds of ministries that are so inspiring for us at NEXT gatherings and the kind of ministry that seems to be possible in our own contexts?  How do we discover what’s NEXT in the inertia of long-standing habits and traditions?  How do congregations embark on a journey toward the future while carrying the blessings and burdens of the past?  How do we find the energy and urgency to apply ourselves to this task NOW even when there is no immediate crisis to impel us toward big changes and bold risks?

We know it’s a mistake to go for hip and trendy if that’s not our style.  We also know that we can’t keep wearing grand dad’s clothes forever.

Jesus told his followers:  ‘Have you understood all this?’ They answered, ‘Yes.’ And he said to them, ‘Therefore every scribe who has been trained for the kingdom of heaven is like the master of a household who brings out of his treasure what is new and what is old.’

How are you making these connections?  What have you found helpful if you are working toward transformation in an established church that is still doing okay in many respects?  How are you finding ways to generate energy and excitement? To  foster a sense of urgency and focus on the future?  To walk the tightrope between the current church and the NEXT church?  Join the conversation.

And hey, Penn Holderness–I hear you have Presbyterian connections: what do YOU think???

Karen Sapio is Pastor of the Claremont Presbyterian Church a NEXT Church Advisory Team member. 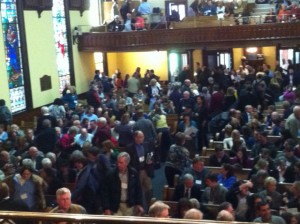 On March 4-5, 2013, 600+ gathered at First Presbyterian Church of Charlotte to worship God with joy, deepen relationships with one another, imagine what the church born again might look like.

You can watch the videos from our gathering here.

In John 3:4, Nicodemus asks Jesus, “How can anyone be born after having grown old?  Can one enter a second time into the mother’s womb and be born?”

As we strive to answer the question of “what’s next?,” we claim and proclaim what we do know:

1) The good news of Jesus Christ,

2) Our call to spread that good news.

At the 2013 National Gathering, we will focus on what is born from the Spirit.  We will lift up the magnitude of the message over the chaotic culture moment and the disappointments of our institutions. We will reclaim our calls to ministry even as those calls evolve. We will celebrate what the Spirit has done and is doing so that we can be open to what the Spirit will do.

We have to be born again.