In the 1980s, the “church growth movement” emphasized the need for churches to focus on their own homogenous group in order to minimize the barriers between the church community and those outside. If the initial church community was composed of Anglo, middle class parishioners, it was believed that keeping the focus on the same kind of people would ensure greater growth. This principle came to be known as the “HUP,” or homogenous unit principle. I bought into this theory — and even taught it as a church growth consultant. 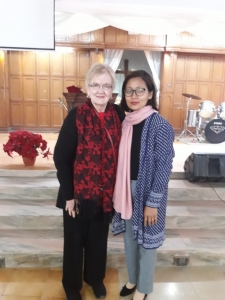 While the social theory of “like attracts like” may have some results, sadly, the theological implication of the HUP is devoid of the gospel of the kingdom. The gospel of the kingdom breaks down the walls that divide, brings together people who eat meat and those who don’t, unites Gentiles and Jews, male and female, marginalized and privileged, and on and on. The local expression of the Church should reflect the kingdom makeup as much as possible. Only then can the observation made of the early church, “behold how they loved one another” be true.

But how in the world can this happen in this era of polarization, claiming sides on the political fence, keeping out those who are not like us? Can it happen? I have lived much of my working life either in another country or in a city of 12 million with over 80 spoken languages. And I can attest to the richness of life that comes from encountering those who look, eat, dress, worship, and speak differently than I do. And while most of us cannot relocate to a different city or town, none of us are restricted from crossing the cultural divides around us, if we want to demonstrate the liberating nature of Christ’s kingdom in a world that would say “find people like yourself” and grow your church with the same kind of people.

Lest you say “we are good at giving to the poor” or “our church marches for the marginalized,” have you entered into the world of those who are different and allowed them to wash your feet or serve you their unusual food? Have you made yourself vulnerable to those of a different faith or social structure so that you might have the blessing of receiving and learning?

Some years ago, while working in southern Zambia, I complained a bit when for several months, potatoes disappeared from the roadside markets and small stores. The ministerial students in my classes listened and laughed but then one Christmas Eve, three of the students appeared at my door with a 50 lb. sack of potatoes they had carried from their village more than 100 miles away. I was overwhelmed by their love and generosity for their “complaining” professor. As I boiled and roasted and fried potatoes in the months ahead, I realized they had shown me a side of love I had not experienced when I just hung around with folks like me.

Going to the other side, encountering those who look, speak, eat, and maybe even smell different has a way of demonstrating the many shades of love and revealing the kaleidoscope of the kingdom.

Elaine Vaden serves with The Antioch Partners as a theological educator. She joyfully teaches missiology (and sometimes church history) in places like Nepal, India, Mexico and Zambia. The picture was taken with a Nepalese friend after Elaine preached in Kathmandu.