On Maundy Thursday, I sat in the chapel of a seminary with about nine other people to remember Jesus’ last night before he was killed. The ten of us represented things that past generations of church might not have envisioned. I, a straight United Methodist pastor, shared leadership with a gay Presbyterian pastor. Our group was diverse in age, gender identity, denominational histories, and ethnicity, paying no mind to the old discriminations of too much of church life in America. We needed this service to demonstrate that we all belong to God. My friend made that real for me in a way that made me feel like we were part of something beyond just us. 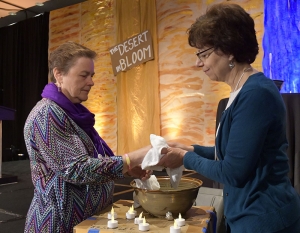 The old “triumphal” version of Christianity was nowhere to be found as we tried to embody Jesus’ commandment to his disciples: love one another. Instead of getting a liturgy from a publishing house, I put the liturgy together myself, combining high doses of introspection and accountability with the Gospel readings and the Communion and foot/hand washing rituals. The guitar player from my friend’s congregation played music he had written, music that set the tone for something intimate and real, nothing packaged, nothing made for sale. We were small and decidedly not worried about attendance numbers or finances. I think we saw a new vision of the old, old story of Jesus.

In the late 1990s at the first parish I served, the postmaster in that town told me that she always asked new residents which denomination they claimed so that she could both give them directions to the church and also — get this! — send their contact information to the pastor of the “church of their choice.” That violation of privacy actually seemed normal to her! To her, churches still had a vague belief that newborns were the “future of the church,” that churches held a foundational part of the community, and that new folks were just out looking for a church to attend.

Denominations trusted these time-tested theories, so they built their new churches in high development suburbs having only slightly adapted to new cultural circumstances, believing that church was like cereal to people — everyone bought it so the only question was which one. Because those emerging generations had lots of questions, we created “seeker sensitive” worship services intended to address those questions by still funneling people towards the “right” answers. Church leadership learned to measure success by the numbers: attendance, contributions, staff size, square footage, number of programs, and the number of those who participated in programs.

By those standards, the Maundy Thursday service my friends and I put together would have been considered a failure, partly because it would have been desperately confusing to know which church got to claim the attendance numbers, and partly because in my misguided denomination my partner in leadership would not be allowed to fully respond to how grace has called him as a husband or as a minister.

Perhaps denominational fiefdoms, standardization of doctrine, segregation of worshipping communities, and the straightness, whiteness, and maleness of mainline Protestantism served some purpose (God only knows what). But while God has always been up to something new, the institutional American church has generally shown little capacity to do anything more than repackage the product — a product that in practice has often had little to do with Jesus the deliverer and more to do with Jesus the logo.

We are now learning that what we were doing, particularly in terms of our funding model, isn’t sustainable. We find ourselves staring at a different situation with less certain paths. This new frontier has the potential to reform the ways in which the people of Jesus practice what he taught, but it is clearly scary to many in the pews and many in the institutional offices. Hopefully the loss of our privileged stature in society will remind us to repent of how we’ve let go of our essential mission to love God, love everybody, and teach others to do the same. Jesus still speaks to people. People still need the love, accountability, honesty, and grace that Jesus expects and that Jesus people are called to offer. The difference is that people are now emboldened to admit that they don’t find those things in the institutional church any more. This is a chance for the church to recalibrate and let go of some idols.

For us the question now is what we should have been asking all along: what is God doing and how can we be part of it? From simply talking to people, you realize pretty quickly that many folks didn’t wait for the permission or vision of the church before setting out to meet the real needs of the world: caring for the poor and the migrants, actively combating racist systems, caring for the environment, searching for solutions to everything from homelessness to the re-segregation of schools to the cruelty of gentrification to the economic injustices that define too many workplaces. Many who don’t attend church long ago embraced that same-sex couples deserve the human dignity of a marriage ceremony. God didn’t wait on the church to get things done. In fact, I’ve come to believe that many of my non-church friends are better doers of the Word than the people who read it every Sunday morning.

People need what we’ve always needed: spiritual and physical safety and nourishment; we’ve always needed places to belong. That Maundy Thursday service sure felt close to what God is doing, close to the kingdom Jesus dreamed about. We know he likes to challenge our assumptions about what it means to follow him — a service led by a gay pastor and a straight pastor, a Presbyterian and a United Methodist, might challenge some assumptions. But what I know is that the willingness to belong to one another in that one hour helped us belong to Jesus in ways previously unimagined. God did and is doing a brand new thing.

Having grown up in the North Carolina mountains, Jonathan Coppedge-Henley has a deep appreciation for folks whose voices are ignored, under represented, or misunderstood. He has been a United Methodist pastor for 23 years in urban, suburban, and rural churches, He has been a church planter and has served historic congregations. He has some extraordinary worship experiences and tripped all over himself in some others. He has held numerous leadership positions in the United Methodist Church, particularly in campus ministry, but he also has an extensive background in community development. For five years he was the host of the Road Signs radio show on the alternative rock station in Charlotte in which he highlighted alternative rock songs as ways to make sense of life. He is a clergy coach to residents in ordained ministry and he writes weekly columns for the Morganton News Herald. As his current side gig, he is preparing to launch Neighborhood Table, a non-profit coffee shop, pub, and co-working space that will host community-building story-telling, artist collaboration, conversation, and peacemaking. Jonathan and his wife Elizabeth, also a United Methodist pastor, have two wonderfully sarcastic children, Owen and Lora, and vicious watch dog, their Berne-doodle, Homer.