Each month, we post a series of blogs around a common topic. During July, Erin Counihan is curating a month of blog posts exploring Mental Health and Ministry. Join the conversation here, on Facebook, or Twitter!

I always know when Philip’s in church, because the Lord’s Prayer throws him off every time.

Admittedly, it’s not a large congregation: on most Sunday we’re not two verses into the opening hymn before I’ve taken a mental attendance of everyone in the pews. But just in case I’ve missed him, the Lord’s Prayer is when Philip – which is not his real name – makes his presence known.

He can’t quite say it in time with the rest of us. He can’t quite keep the rhythm. If I speed up, he slows down. If I slow down, he jumps ahead. I lead the congregation; we go along more or less like we always do; but Philip just goes by his own beat.

It’s a very public act, of course, breaking against the conventional rhythm of the corporate prayer. There’s no hiding. Everybody in the orchestra knows when the trumpet is off the beat. And I know that it disturbs the sacred harmony of that moment for more than a few members of our congregation. This is ritualized stuff. It’s not just the rhythm of a prayer; it’s the rhythm of  devotional Christian life, it’s the metronome of Sunday morning that threads our faith journeys together. So much changes, but we always sing the Doxology, and we always say the Lord’s Prayer. These things stay constant, and the bit nobody wants to say out loud is that he is getting in the way.

Nobody will admit that at the door, of course. We have nothing if not the hospitality of a small church anxious about its future. Before church, Philip is greeted with a friendly smile. We know his name, and we know where he likes to sit. Afterwards, he’s always invited to coffee hour, and I know somebody will always find him with friendly conversation. But during that hour of worship, I also know that it feels different. I see it on faces in the congregation; maybe I even see it in my own heart. The Lord’s Prayer comes along, and there goes Philip, and I can hear us asking despite ourselves, “Why can’t he just say the words the same way as everybody else?”

Of course, Philip can’t follow the beat of the prayer because he’s mentally ill. He needs to be able to hear his own voice. He needs to be able to use his own words. It hardly surprises me that he wants to march along to the beat of his own drum. What surprises me more profoundly is that any of the rest of us manage to say the prayer together in the first place. After all, Philip is hardly the only one who brings his demons with him on Sunday morning. Perhaps the only difference is that Philip wears his on the outside.

About a year ago, I preached a sermon to this congregation on mental illness and my own family history with clinical depression. It was a more personal testimony than I am accustomed to giving from the pulpit, and it was terrifying, but I thought it was right for this long process of learning to trust and be trusted by the people I have been called to serve. It was the last conscious step in telling them my story, which is, among other things, the story of a son who survived his father’s own crippling depression, one who knows that shadow a little too well.

One of the predictable-in-hindsight consequences of that sermon was that more than a few members of the church came forward to tell me about their own hidden battles: anxiety, mood disorders, depression, suicidal thoughts. All of those demons of mental illness that stay nicely hidden underneath the surface – and it turns out that they live in every corner of my church. It turns out that more than a few of us are bringing the demons of mental illness into the pews of Sunday worship. It turns out that the ability to come to church and stay on the beat in a corporate liturgy is no guarantee of mental health.

It turns out that Philip is in good company. We just don’t want to admit it.

Of course there are real differences between Philip’s diagnosis and the hidden struggles of those with anxiety disorders or clinical depression. Not all mental health disorders are created equal. For a start, Philip lives his struggle in the public eye, while depression and anxiety cling to the shadows — and of course that’s just the beginning. But now I know, more than ever: come Sunday morning, we’re all sitting in the same pews. We’re all gathering around the same baptismal waters. We’re all sharing at the same table.

And we’re all coming to the Lord’s Prayer with the same fear and trembling. For some it’s the rhythm, and they just can’t keep the beat. For others, it’s in the words, it’s this staggering sure faith in a God who gives daily bread even to those lost in the shadows. I wish it could be as easy to notice those who cannot say the words at all as it is to be disturbed by the one who can only say them in his own time. 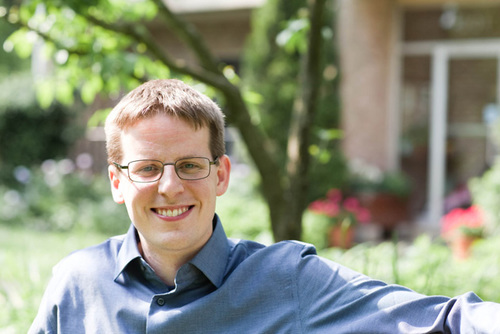