Professor David Leong of Seattle Pacific University gives a keynote presentation at the 2018 NEXT Church National Gathering in Baltimore, MD.

David Leong, Ph.D., is Associate Professor of Missiology at Seattle Pacific University and Seminary, where he directs the Global and Urban Ministry program. Dr. Leong’s teaching and research examine the theological meaning of the city, and he is passionate about churches engaging their neighborhood communities with creativity and compassion to bridge racial and cultural divisions. David lives in Seattle’s beautifully diverse Rainier Valley with his wife and two sons.

Rev. Dr. Linda Mercadante, Professor of Theology at The Methodist Theological School in Ohio, gives a keynote address about those who identify as spiritual but not religious at the 2017 NEXT Church National Gathering.

Linda Mercadante is Professor of Theology at The Methodist Theological School in Ohio. She was once a “spiritual but not religious” person, but through an intensive spiritual journey has become a seminary professor, theologian, and ordained minister in the Presbyterian Church (USA). You can read about this in her memoir, Bloomfield Avenue: A Jewish-Catholic Jersey Girl’s Spiritual Journey. A former journalist, she has won many awards for her research in such areas as the theology of culture, film and theology, addiction recovery spirituality, conversion narratives, and the SBNR movement. She has published five books, nearly 100 articles, and speaks internationally on a variety of topics.

Dr. Mercadante received her Ph.D. from Princeton and has been serving at The Methodist Theological School for more than 25 years. She is married to Joseph Mas, a native Cuban, an attorney, a leader in the Ohio Hispanic community and a political commentator on the TV show Columbus on the Record (WOSU). They have three children, Sarah, Emily and David.

This blog was originally posted on the Huffington Post blog. Linda Mercadante is our Monday evening keynote speaker at the 2017 NEXT Church National Gathering. She is professor of theology at The Methodist Theological School in Ohio. She was once a “spiritual but not religious” person, but through an intensive spiritual journey has become a seminary professor, theologian, and ordained minister in the Presbyterian Church (USA). Here’s a sneak peek of what Linda will bring to the National Gathering.

Are we all Hindu now? That’s what a Newsweek magazine claimed in 2009 when it observed the burgeoning world of the “nones.” “Nones” are those not affiliated with any part of the American religious heritage. Surveys seem to indicate they prefer not to identify with any religion at all. But the Newsweek article suggested instead that we are not seeing so much a lack of religious affiliation as conversion to some other world of beliefs, in particular Eastern.

Are we seeing a “turn to the East” among those people unaffiliated with any particular organized religion, especially those who self-identify as “spiritual but not religious?” I don’t think so. Of course, the influence of America’s increasing religious diversity is evident in the burgeoning world of alternative spiritualities. And there is, in fact, a particular attraction to certain ideas borrowed from such Eastern religions as Buddhism and Hinduism, such as “monism.”

But after spending the last five years speaking with hundreds of SBNRs, attending their diverse gatherings and learning as much as I could about and from them, I don’t think we are truly seeing a conversion to Eastern religions or religious ideas. Instead, I contend that many SBNRs are creating a particularly American spiritual mix, borrowing, adapting and adjusting from many sources. The key ingredients of this mix, however, are distinctly American. Here are some of them.

First, it is individualistic. Americans have always valued freedom of religion, but until recently were still fairly committed “joiners.” Now, joining with like-minded religious others does not seem to be as compelling for many. While most religions promote some form of community to a greater or lesser degree, this new spirituality does not give this top priority.

Second, it is “detraditioning.” Given that most of our ancestors came here from somewhere else, America has always held tradition a bit more lightly than other places. And much of American Protestantism did stress “the priesthood of all believers.” But this new American spirituality takes that impulse further. Now, the source of spiritual authority” has shifted from “out there” to “in here.” In other words, many feel they must rely primarily on their own spiritual judgment rather than looking to an authoritative figure or tradition as many religions advocate.

Third, it is therapeutic. Many Americans are focused on becoming whole and healthy, not just physically, but emotionally and spiritually. Whereas many religions see greater goals beyond personal well-being, this new American spirituality often promotes this as primary.

And, fourth, this American mixture takes the freedom to pick and choose ideas, adapting them to the American context. There seems little felt obligation to take the whole religious package of any particular tradition. As a case in point, many of my interviewees believe in reincarnation. However, their version is often unlike an Eastern form, which allows that one might regress, rather than inevitably progress, in the next life. My interviewees Americanized this. Our belief in “second chances,” late-bloomers, and the rewards of perseverance, made them insist that endless lives of self-improvement were the trajectory of the afterlife.

There are many implications, both positive and negative, of this new American spirituality. But whether we applaud or lament it, it is impressive to see American resourcefulness at work. In the end, I don’t see a literal “turn to the East,” much less a rush to convert to Eastern religions such as Hinduism and Buddhism. In fact, among my hundreds of conversation partners, all SBNRs, I saw very few who actually “converted” to a different religion. Instead, they borrowed, adapted, and adjusted what they found attractive or compelling in the culturally and religiously diverse world increasingly around us. My interviewees often believe that, rather than joining any particular religious group, they must keep their options open on the journey of spiritual growth.

Linda Mercadante is one of our keynote speakers for the 2017 NEXT Church National Gathering. She is professor of theology at The Methodist Theological School in Ohio. She was once a “spiritual but not religious” person, but through an intensive spiritual journey has become a seminary professor, theologian, and ordained minister in the Presbyterian Church (USA). In 2015, Linda was featured on the TODAY Show. Here’s a sneak peek of what Linda will bring to the National Gathering: 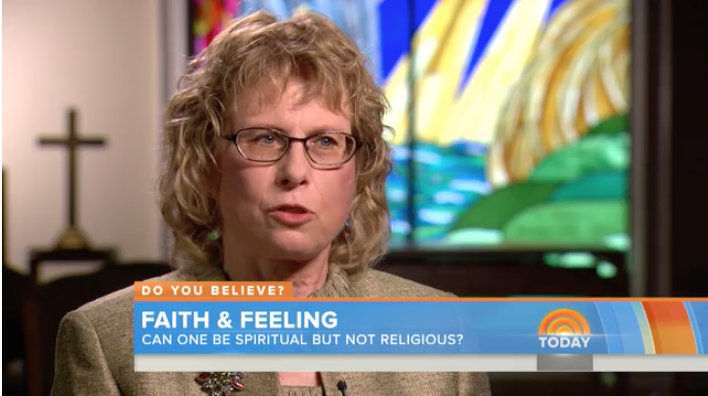 Linda received her Ph.D. from Princeton and has been serving at The Methodist Theological School for more than 25 years. She is married to Joseph Mas, a native Cuban, an attorney, a leader in the Ohio Hispanic community and a political commentator on the TV show Columbus on the Record (WOSU). They have three children, Sarah, Emily and David.

Clergy affiliated with Baltimoreans United In Leadership Development (BUILD) share about their organization and its successes in Baltimore, MD.

Baltimoreans United in Leadership Development (BUILD), a local affiliate of the Industrial Areas Foundation (IAF) and Maryland’s largest citizens power organization. For thirty-five years BUILD has helped identify and develop leaders to build citizen power for change in their own communities. BUILD is responsible for the successful passage of the first living wage ordinance in the world, the largest afterschool program in Baltimore (Child First), and the rebuilding of two blighted neighborhoods – Sandtown-Winchester and the Oliver community (in partnership with The Reinvestment Fund). Recently, BUILD led the effort to secure $1.1 billion dollars in public financing for the rebuilding and renovation of more than 1/3 of Baltimore’s public school facilities, the largest single increase to neighborhood investment in Baltimore’s history.

Andrew Foster Connors is the Senior Pastor of the Brown Memorial Park Avenue Presbyterian Church in Baltimore, MD, a position he has held since 2004. A church “alive in the city and the world,” Brown Memorial Park Avenue continues to live into its mission to become a radically inclusive Christian community, sent into the world to work for God’s peace and justice. Andrew serves as clergy co-chair of BUILD and is an organizing member of NEXT Church. Andrew is a native of Raleigh, NC. He attended Duke University as a B.N. Duke Scholar where he received a B.A. in History with a focus on contemporary social movements. He holds a Master of Divinity from Columbia Theological Seminary in Decatur, GA. Andrew is married to the Rev. Kate Foster Connors, also ordained in the Presbyterian Church (USA). They live in Baltimore with their two children.

Glenna Huber has been a priest in The Diocese of Maryland since 2009. She has served as Vicar in three settings during that time with a consistent ministry at The Church of the Holy Nativity in Park Heights. Prior to joining the Diocese of Maryland Rev. Huber served for eight years in the Diocese of Atlanta her sponsoring Diocese. The Episcopal Urban Caucus, The Maryland Truth and Reconciliation education sub-committee, and Baltimoreons United in Leadership Development, a IAF affiliate, are among some of the boards and commissions on which The Rev. Huber serves. Rev. Huber earned her M. Div. at The General Theological Seminary in New York and her undergraduate at Spelman College in Atlanta. She and her husband are currently raising a 2-year-old son and a baby girl born April 2015.

Bishop Douglas Miles is a native of Baltimore. He has over 44 years of ministry experience in Baltimore, California, and Tennessee. In 1992, he organized Koinonia Baptist Church in Baltimore, which has expanded to two campuses and houses many different community outreach ministries, where he was consecrated Bishop of Koinonia. He is serving for the second time as a Clergy Co-Chair of BUILD. He has served in leadership positions with Interdenominational Ministerial Alliance, Greater Homewood Interfaith Alliance, Maryland Health Care Initiative, Baltimore Interfaith Coalition, Maryland Food Committee, and Mission Baltimore. Bishop Miles is a national award-winning columnist with the Afro-American newspaper. He has preached and lectured throughout the world lastly serving as Jellicoe Preacher at Oxford University in England and is published in a book of sermons entitled Living in Hell. He is married to the former Rosanna White, the proud father of two sons – Harvey and Dante and grandfather of five.

Taking a cue from Stacy Johnson (Dallas 2012), MaryAnn begins to reimagine the gospel through the lens of improv. She traces the “rules” of improv and notes the ways in which church communities might begin to live by these rules of engagement.

MaryAnn is pastor of Idylwood Presbyterian Church in Falls Church, VA and a member of the NEXT Church Strategy Team. This keynote presentation was given at the Rochester, NY regional gathering on November 5, 2012.