It was a blessing to grow up as a native West Virginian with small town roots and a sense of community. In my hometown of Philippi I was baptized and confirmed and ordained — all in the Philippi Presbyterian Church. This church took its baptism vows seriously and helped to nurture my faith that has led me to be an ordained pastor in the Presbyterian Church (U.S.A.) for the past 9 years. But ministry looks a lot different now in West Virginia. 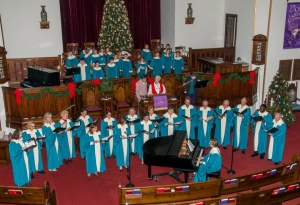 Currently I serve as the pastor the First Presbyterian Church in Fairmont, West Virginia. It too is a small town by today’s standards — but it’s much larger than Philippi where I grew up. In 2015 this congregation celebrated 200 years of ministry and in 2016 they celebrated 100 years in their current building, but these celebrations come with much sadness. As with many of our congregations, membership has shrunk, but in West Virginia the numbers are staggering. My current church was built 100 years ago, during the industrial age, and this congregation had more than 1200 members. There were three worship services and educational opportunities for everyone. Many of my members remember these glory days of times past, when the church was the center of both the community and of social life. They were children during this time and they long for those days to return. But the reality is that this will never be. As the need for coal decreased and the railroads moved west, so too did companies and industries. The jobs and people followed.

The current economic state in West Virginia has only continued to diminish as companies continue to leave the area — and nothing takes its place. So the congregation that was 1200 members is now 150. My home congregation, Philippi Presbyterian Church, has 12 members where there used to be more than 100. Those that stayed owned local businesses or worked as teachers, doctors, professors at local colleges, coal miners, and in local government. These people are the members of our churches. They grew up with the traditions of the church and hold tight to the rhythm of ministry that they remember from years past.

The challenge for these churches moving forward will be to embrace a new understanding of ministry in rural Appalachia. Will they be able to move towards new ministries the reach people in their local communities, communities that are vastly different today? Most of these churches won’t be able to make the shift and will not survive. It is a story that is far too common in West Virginia and it’s sad to say, the little church that I love, the little church that nurtured and raised me will likely be one of those that doesn’t make it.

But there is hope! With every death there is a new life that arises. There is always the opportunity to grow and nurture relationships in community around West Virginia. In the future it may mean that these groups form around music gatherings or at a little diner for a weekly meal. Regardless of where we meet, ministry will continue to take place as God strengthens our faith and relationships with others. The big question is — who will we invite to join us?