The request came from the most unlikely of places. Judy was always quiet and loving but rarely spoke out against others or things in fear of making waves. It wasn’t that Judy didn’t have an opinion about things – it was that she valued the relationships that drew her into the fellowship of our congregation more than the conflict. Judy lived and still breathes the words drafted by the hymnist John Fawcett, “blessed be the tie that binds our hearts in Christian love and fellowship with kindred minds is like to that above.”

Even so, it was a surprise when she softly raised her voice in the middle of a Presbyterian meeting and said… “Would it be ok if I hung a tie out in our back shelter with socks, scarves, and hats? Because I know…” (she hesitated to say) “we know that there are folks who are living in the 3 acres of woods behind our church in tents or less than that.” 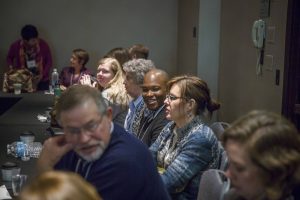 The room stood still, for it was a rare occasion that Judy made a request that had the potential of being controversial – or get push back for not being the way that we do things here – but it was her voice that helped get others to say yes, yes of course, we should do that.

So where do we go from here? In our small corner of the world in pseudo rural Southern Illinois, the problem of homelessness is growing. The state of Illinois has cut resources for folks suffering from mental illness and addiction. A large state prison is located only 20-30 minutes away from our “big town” amongst the smaller farming villages and communities. And while our little corner of the world has a homeless shelter that was endorsed at its inception by the community with the strong influence of my congregation, it came with a price. That price has been lower residency of guests because it is a family shelter functioning in the midst of ordinances that prevent people without homes from residing there if they test positive for drugs or alcohol or, in certain cases, have a felony.

And while I felt a strong pull to learn and grow around this sort of mission work, the work of the people, I felt unprepared to understand how to address the tie that binds us to those who have faced conviction, were recently released, and now have no place to go except the back “forty” of First Presbyterian Church of Mt Vernon.

It was that simple request from Judy that started with a rope tied from one pole to another with socks, hats, gloves, and scarves that helped me rethink: what are we doing here? This is the tie that binds the people living in the woods to the people worshipping in the sanctuary immediately in front of them. It was at the NEXT Church National Gathering, with the help of the creative spirit of the ad hoc, crowd-sourced worship band and the workshop led by Hans Hallundbaek about the rehabilitation through arts program at Sing Sing Correctional Facility, that I learned the Holy Spirit breathes life in the ties that bind us in new and interesting ways as the Body of Christ.

I learned that for many it is uncomfortable to deal with the overpopulation of the prison system. Many are afraid of those who are released back into society. And even more disturbing is that it is very common for former inmates to return to prison because they have not learned any soft skills to transfer to the outside world, leaving them in the cold returning to old habits.

The tie that holds our socks, gloves, and scarves is a visual reminder to my congregation of all of these folks and has had us start to ask the question: what can we do better? How can we equip people to live fully into the lives that God has called them to live without pressuring them to be something different and helping them learn basic soft skills to be able to function in the outside world? What began with a tie that binds in our shelter has now grown into a conversation with our local homeless shelter, community leaders, and the community at large asking how we can serve those experiencing homelessness better. Does it mean housing them in our current, more established family homeless shelter, or does it mean thinking outside of the box and doing something different?

I can’t say that we have answers at this point. But I would say that the time I spent at the NEXT Church National Gathering opened a door for me to remain non-anxious in the midst of the questions. Others have been there before, improving their way to an answer through the melody line of a production held on the inside of a maximum security correctional facility. To hear with an open ear each person’s concern while still acknowledging that there is a problem. To be available to speak between various organizations and help them listen to one another while still attempting to come up with a new solution to strengthen the tie that binds us together.

It started with an unlikely voice acknowledging the thing we, my community of faith, all knew but many tried to ignore and disregard. It helped us see the people in the margins who were and still are quite literally living in our backyard. And we hope to continue to seek out how the tie that binds us in Christian love builds up the holy fellowship of kindred minds beyond the walls of the National Gathering and into our little corner of the world in Southern Illinois.

Rachel Helgeson is the solo pastor at First Presbyterian Church of Mount Vernon, IL, and is still learning and growing into God’s unimaginable call. She never imagined that her gifts in music and passion for mission would be synthesized right in her congregation’s backyard but is grateful for the formative places that led her to this place (including her studies at Louisville Presbyterian Theological Seminary, First Presbyterian Church of Dallas’ Lilly Residency Program, and her prior musical training & work in Pennsylvania and New York.)