The timing of Easter – the great celebration of God’s power over death – just before the 50th anniversary of the assassination of Dr. Martin Luther King Jr. – whose organizing acumen and brilliant preaching challenged (indeed, threatened) the white majority’s tight grasp on power – has gotten me thinking. 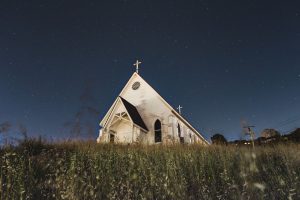 Power is not often talked about in the church, apart from the sovereign power of God. In fact, in 17 years of ministry, I have never encountered a congregation with an adult education class on the topic. Which is curious, because most churches I know are struggling mightily to reinvent themselves in a time when the Church has less and less power in society. You would think that our lack of power would create an urgency in the Church to understand and use it.

The story of the Canaanite woman from Matthew 15 is a reminder to us, and perhaps to the North American Church, that even one who is not granted societal power can find power and use it to create change:

Jesus left that place and went away to the district of Tyre and Sidon. Just then a Canaanite woman from that region came out and started shouting, ‘Have mercy on me, Lord, Son of David; my daughter is tormented by a demon.’ But he did not answer her at all. And his disciples came and urged him, saying, ‘Send her away, for she keeps shouting after us.’ He answered, ‘I was sent only to the lost sheep of the house of Israel.’ But she came and knelt before him, saying, ‘Lord, help me.’ He answered, ‘It is not fair to take the children’s food and throw it to the dogs.’ She said, ‘Yes, Lord, yet even the dogs eat the crumbs that fall from their masters’ table.’ Then Jesus answered her, ‘Woman, great is your faith! Let it be done for you as you wish.’ And her daughter was healed instantly. (Matthew 15:21-28)

A gentile, the Canaanite woman is outside the House of Israel, to whom Jesus’ mission was targeted. She is clear in her self-interest: she wants to find healing for her daughter, and she will stop at nothing to achieve her goal. Here is how her action unfolds:

In this action, the Canaanite woman used a strategy of agitating Jesus by appealing to his self-interest. She interrupted the apparent prejudice against Canaanites that led Jesus to dismiss her, and instead forced him to listen to her. By doing so, she changed Jesus’ mind, and got what she wanted: healing for her daughter.

Often, we read this story from Jesus’ perspective: we should be open to people who are different from us, who we might at first dismiss.

But what would happen if we read it from the Canaanite woman’s perspective? Maybe, in this time when our society often dismisses the Church, we can learn something from her persistence, courage, and use of power.

Kate Foster Connors is a graduate of Wesleyan University and Columbia Theological Seminary. She has served churches in Memphis, TN, and Baltimore, MD. Currently, Kate is the Director of The Center: Where Compassion Meets Justice, a mission initiative of the Presbytery of Baltimore that hosts church groups for mission experiences in Baltimore. She and her husband, Andrew, have 2 teenage daughters, a cat, and a dog.