Back in 2011, at the first NEXT Church National Gathering, Joe Clifford gave a short talk in which he introduced the chemistry concept of the “adjacent possible.” The concept, so far as I understand, is that specific chemical reactions are possible based on what elements are next to one another. Clifford suggested it is important for the church to pay attention to what is next to us because there are numerous possibilities available to us based on what is adjacent to us. Too often, moving down well-worn paths, we forget that other possibilities exist. On the flip side, we are limited by what is next to us. There are set possibilities of how elements interact with one another. Hydrogen and oxygen combine for water. If you have hydrogen and carbon, you can’t get water, no matter how much you wish it.

The concept of adjacent possible has stayed with me since 2011. In moments when I have felt stuck, it has encouraged me to take a step back and look at the adjacent possible. What combinations might exists that I have been ignoring? What reaction am I wishing for but don’t have the right elements in the right places? 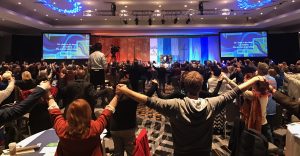 NEXT Church gatherings – local or national – seek to connect leaders to one another, to spark imagination, to offer an honest reflection about the challenges confronting the church, remind us that God’s Spirit is up to something, and encourage us to see possibilities to which we had been blind before.

In 2014, Kara Root told the story of Lake Nokomis Presbyterian Church and the congregation’s creative reimagining of a rhythm for worship in their community. As is true for many congregations, Kara described Lake Nokomis as a congregation that had declined numerically and yet tried to keep up with all the demands and programmatic offerings of a larger congregation. The result was exhaustion. Congregational burnout. Together, the congregation undertook a serious study of Sabbath which led them to be more honest with one another about their energy, their capacity, and a desire to practice the act of Sabbath keeping together as a community. The creative result was a change in their worship pattern so that some weeks they meet on Sunday morning for worship. Other weeks they meet on Saturday evening for a simple supper and evening prayer, preserving Sunday for communal Sabbath keeping. Some weeks they lead worship at a local home for children. A radical change in the rhythm of life was borne out of honesty, theological reflection, and Christian practice.

All of the speakers and leaders at NEXT Church gatherings bring their gifts as an offering to the church in hope and in faith – not with the expectation that everything shared will be directly relevant across all contexts, but trusting that hearing testimony from leaders reflecting on their own contexts might spark a new insight for your own. As an organization, NEXT Church creates space for these offerings, recognizing that though we cannot control what is heard, what takes root, and what is acted upon, we trust that these interactions bear fruit over time.

This month, we are going to revisit some speakers from this most recent National Gathering in Seattle, as well as speakers from previous years. Our hope is that inviting you to engage (or reengage) their work might invite deeper reflection and possibly yield more fruit.

As we continue to journey through Lent and as I, along with other NEXT Church leaders begin an audit process this week with Crossroads Antiracism Organizing and Training, I am reminded again of the powerful keynote Allan Boesak gave at the 2016 NEXT Church National Gathering. During the Q&A, a participant noted the church’s long silence on racism and asked him, “what does the church need to give up moving forward?” Boesak responded with a story.

South African author Alan Paton wrote a book about a principal in Soweto, where the 1976 uprising began. The principal was a gentle guy, not controversial, not one who goes to protests. “Very much like me,” said Allan Boesak. He had many friends in the white community because he did not come to their tea parties to talk about politics. “He was reasonable.”

One day the whites saw him sitting on a stage at a rally. Then the next time they saw him and he spoke at the rally. Then he was in the front leading the march. And they said to him, “What has happened to you? We depended on you! Now you are making things worse.”

“I pray God,” Boesak concluded, “we will have something to show.”

Jessica Tate is the director of NEXT Church and lives in Washington, DC.