During the closing worship service of the 2017 National Gathering, Slats Toole read a powerful prayer of confession about humanity’s tendency to build up walls. We asked God to knock those walls down. The guiding scripture for the entire National Gathering was John 4:1-42; the scripture passage for this service was John 4:19-26. The prayer itself was written by Shelli Latham. Here is the text of the prayer for your own use.

On Tuesday, March 14, at the 2017 NEXT Church National Gathering, we released a new confessional statement in response to the current state of the church and world. It’s called the Sarasota Statement, and it was made possible by a partnership between NEXT Church and the Presbyterian Foundation. We hope you’ll take the statement into your own life and context, using it as a tool to declare your own faith statement, proclaiming the light of Christ.

Glen Bell, pastor of First Presbyterian Church of Sarasota and member of the NEXT Church strategy team, has written more about the genesis of the Sarasota Statement. Please continue reading to learn more.

Near the beginning of 2017, Brandon Frick, a former participant in the Pastoral Development Seminar at First Presbyterian Church of Sarasota, contacted me. Brandon was convinced that in this moment of difficulty and division in the life of our nation and church, we needed to write and profess a new statement of faith in a non-partisan way, beyond any ideology.

Brandon asked me if NEXT Church, which is committed to a vibrant future for our Presbyterian tradition, would be interested in hosting and sponsoring the writing of such a faith statement. Jessica Tate, the director of NEXT Church, and I communicated with the strategy team (board) of NEXT Church. They enthusiastically agreed. 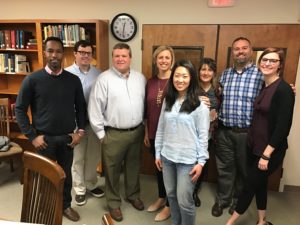 Presbyterians have always been a people of confessional statements. We have adopted statements of our beliefs, Catholic, Protestant and Reformed, in our Book of Confessions, part of the constitution of our Presbyterian Church (USA). Some confessions represent the common convictions of the Christian faith (for example, the Nicene Creed and the Apostles’ Creed). Others reflect the roots of the Reformation and our Presbyterian tradition (for example, the Scots Confession and the Westminster Confession of Faith). Still others speak a powerful word in light of specific challenges in certain times and places (for example, the Barmen Declaration and the Belhar Confession).

A group of eight diverse participants in the Presbyterian Church (USA) gathered in Sarasota on January 23 and 24 of this year. Together, the group wrote a first draft of a statement of faith. Over subsequent weeks, the group refined their work. The Sarasota Statement is being released publicly at the NEXT Church National Gathering in Kansas City, March 13-15.

In the past, almost every statement of faith created and publicly distributed across the church has the result of the selection of a diverse group of scholars and leaders, authorized by a General Assembly. The group works carefully and creatively over several years, and the result is then approved by a subsequent General Assembly and included in the Book of Confessions.

This model is quite different. We believe in times of need or crisis, we are called to turn to the biblical and theological roots of our Christian faith to remember our identity as disciples of Jesus Christ and say anew what we believe. The hope of NEXT Church and the writers of the Sarasota Statement is this: We encourage groups of Presbyterians, in a rich and colorful diversity of relationships, both within and beyond congregations, to conceive and declare their own faith statements, proclaiming the light of Christ.

This statement speaks to the church. It represents only the eight writers individually (as well as NEXT Church and the Presbyterian Foundation, which facilitated its creation). It does not speak on behalf of any of the churches or organizations the writers serve. We are eager to hear your thoughts and reflections about the Sarasota Statement. In April, this blog will feature pieces from those involved in the creation of the statement. Join us then to continue the conversation. In the meantime, comment here, or send us an email. We hope the Sarasota Statement might move you in your own context.

To God be the glory! 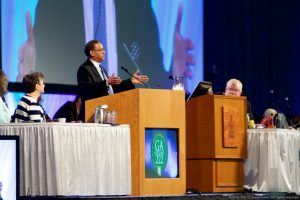