Each month, we post a series of blogs around a common topic. This month, MaryAnn McKibben Dana is curating a series on the Sarasota Statement, which we unveiled a year ago and continue to promote for use in our congregations and communities, along with the accompanying study guide. You will hear from a variety of voices and contexts throughout March, reacting to phrases in the statement, and sharing ways it is being used. How have you used the Sarasota Statement? What is your reaction to these phrases? We invite you to join the conversation on Facebook and Twitter!

“We, a small and imperfect reflection of the church…”
– Sarasota Statement, Preamble

A friend and I have a little saying we use with each other: “Pulling out the splinter.”

Let me back up. A couple of years ago I posted on FB about one of my children having multiple splinters in their hand and how painful it must be and that I was amazed how long they had gone without asking for help. I was making a statement of part amazement and part empathy. That is all. A statement.

And then 25 people chirped in to tell me how to get splinters out of a child’s hand.

I didn’t ask for help. Frankly, I didn’t need help. I have 4 very active children; I’ve figured out my methods of pulling out splinters. But people just cannot help themselves when it comes to helping others. They must tell you what you are doing wrong and how to fix it. 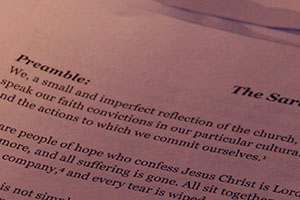 Back it up some more. I sat in the room we used in my residency for Clinical Pastoral Education with tears streaming down my face. My colleagues had filed out of the room, and my supervisor and I sat there in silence. I was wrung out. I was in a place of despair. I had shared that, and my colleagues did everything they could to fix me. I told my supervisor, “I don’t want to learn from this… but all I’m thinking right now is about how much training we went through not to fix people and yet still we don’t get it. And I’m learning to be a better chaplain as they try to fix my grief, but I don’t want to learn from this.”

We cannot help ourselves when it comes to helping people.

We yearn to be helpful and end pain around us, but also… we crave being the authority. We crave it everywhere for everything — our own myth of omni-competency. Polity, parenting, theology, cultural decay and generational theory, chapter and verse of our canon within the canon of the Bible, politics, purity, and yes, even the best way to remove a splinter. We cannot pass up an opportunity to tell someone how to do things better if they just listen to us. It has me weary of many of the ways I used to enjoy being a part of the Church, and I will admit I have removed myself from most clergy groups I used to belong to because they began to feel like know-it-all groups and I wasn’t interested in what they were selling.

And so… I have grown jaded when I see a statement that starts out saying, “a small and imperfect reflection of the church.” Do we mean it? Will our life-our statements AND practices-bear it out? Do we see ourselves as small? Do we think, from beginning to end, that we are primarily… imperfect? Are we willing to abdicate the authority of perfection? Will we set aside authority at all? Or do we, while giving a tip of the hat to buzzy words and phrases, also imagine that we are right about most things, most of the time?

As I sit here at the beginning of the Sarasota Statement and read “a small and imperfect reflection of the church,” my hope and challenge to myself, and to you, is that we hold that thought close from beginning to end. We are naming big challenges here. Moral arc of the universe kind of challenges. And if we think we know the answers before we start — while we are walking and, frankly, any time before the work is done — we are wrong. Let’s take this journey to justice freed from our preconceived answers, our mantles of authority, and chains of righteousness.

Let’s admit, truly, that we are small (but of divinely ordained significance) and imperfect (beloved of God) and that is exactly why we have to sit in the room with the excluded, the disinherited, and the oppressed and let them speak for a while… a good long while. Before we ever — if we ever — speak. Because our job is not to fix it, but to bear witness.

“We, a small and imperfect reflection of the church…”

Andrew Kukla is a pastor at First Presbyterian Church in Boise, Idaho.

Linda Kurtz, student at Union Presbyterian Seminary, gives an Ignite presentation about her experience completing a unit of Clinical Pastoral Education at a behavioral health hospital.

Then Moses said, “I must turn aside and look at this great sight, and see why the bush is not burned up.” When the Lord saw that he had turned aside to see, God called to him out of the bush, “Moses, Moses!” And he said, “Here I am.” Then he said, “Come no closer! Remove the sandals from your feet, for the place on which you are standing is holy ground.” Exodus 2:3-5 (NRSV)

Recently, a stand-up routine by the comedian Tig Notaro made the rounds of “you have to listen to this” lists on the Internet. Last summer, Notaro nearly died from a rare combination of medical problems. About a week later, her mom died in a tragic accident. Not long after that, Notaro went through an awful breakup. Then, right after that, she was diagnosed with breast cancer, in both breasts. At the time of the recording, after time counted in hours, not weeks, she found herself onstage at the Largo Comedy Club, in front of an audience anticipating a stand-up routine.

She couldn’t do it. She just couldn’t pretend that everything was okay. Instead of telling her usual witticisms, in which bees taking the expressway figure prominently, she told the truth. “Hello, good evening,” she said. “I have cancer . . . just found out. Good evening.”

During her set, Notaro led the audience through a masterpiece of comedy and an anthropological study of grief. I’ve never heard anything like it. The audience struggled to know how to react. There were moans of sympathy and distress from some, uncertain laughter from others, and hushing noises from the rest.

By the end of the set, the crowd was eating out of Notaro’s hand. They would have done anything she told them to do. It was as if the audience realized the enormity of the gift they had been given: the fit of Notaro’s own self . . . her refusal to pretend to be something she wasn’t.

Had Notaro just performed her usual set, it would have felt like a crime of inauthenticity, posturing instead of art. Toward the end of the performance, at the urging of the audience, she did tell her standard, “bee taking the expressway” joke. Because of everything that was not said, the joke assumed an almost debilitating poignancy. The audience, who had witnessed the depth of her pain and beauty, could no longer be satisfied with pro-forma jokes. As they all confronted the reality of death, and found the grace to laugh, the Largo was transformed; the comedy club became holy ground.

When the church is at its best, it resembles that night at the Largo. People need a place to give voice to truth, before God and everybody, and know that they are held in safety and love. Whether in or out of a church building, we need a community where healing and reconciliation mean more than appearances and convention, even if it goes off script . . . and especially if it challenges our expectations of what we paid to see.

A few years ago, while doing my Clinical Pastoral Education, I visited a certain patient in the hospital. She had breast cancer, and her body was rejecting the cosmetic implants that she wanted to conceal her double mastectomy. She was bald, gaunt, red-eyed, and wild in her grief. She needed to talk to someone about how mad she was . . . at her body, at the cancer, and at God.

In my memory, there was no noise in the hospital except her voice, no light but that illuminating her bed. For forty-five minutes she raged, wept, and confessed everything on her heart to this inexperienced seminary grad.

When her storm had passed, we gripped hands, hard, and prayed together. It was hard to know when we stopped talking and started praying. The feeling of God’s presence throughout our conversation was so strong, you could almost feel its warmth emanating as from fire. As we prayed, we laughed, and cussed, and cried some more. After we said “Amen,” the patient’s face was serene, and I was changed forever. That hospital room became holy ground.

Every church I know has unspoken rules about acceptable behavior, whether in or out of worship. Most of the time, enforcement of these rules is self-policing: if people aren’t feeling presentable, they stay home, rather than burdening others with their troubles. They don’t want to cry, and risk embarrassing themselves. They feel too raw from the sharp edges of their lives to be able to put on a polite face.

But when wounded people feel safe enough to speak their truth, to say when they’re mad or confused or scared, I’ve seen the Holy Spirit work miracles in church. Healing begins when a friend hugs your shoulders as you cry during the hymn. Sympathy and help are found as you discuss problems after worship. Even the simple act of being in a crowd of people who are praying and worshiping God can bring about change when change seems impossible. It is precisely in those moments when our lives are messy and unpresentable need that we need church the most.

We talk a lot about our brokenness when we confess our sins on Sunday. But theologically abstract brokenness looks very different from everyday brokenness, the kind of brokenness that makes you feel that you’re not good enough. In the church I want us to be, everyday brokenness becomes a blessing. When we bring our cracked and chipped lives to the font, to the table, to the people, to the Lord, we find ourselves on holy ground.

My prayer is that our awareness of God’s presence will grow and sharpen, becoming as keen as any other sense, so that we might walk barefoot everywhere we go. In comedy clubs, in hospital rooms, and yes, in church, may we say what needs to be said, in the deep and challenging love of God. May the church be a place that people seek out for such healing and transformation, instead of feeling they must stay away until they are presentable. May we all find ourselves on holy ground.

Esta Jarrett is the Pastor at Canton Presbyterian Church in Canton NC, through the “For Such a Time as This” small church residency program. She is a graduate of Union Presbyterian Seminary (although she still calls it Union PSCE in her head).