The term “planned giving” is not always easily understood. After all, shouldn’t we always plan when making a gift to someone, especially the church or another charitable organization? How is a planned gift any different from a regular gift? These are just a sample of the questions I often hear when presenting the topic of planned giving to a congregation or gathering. 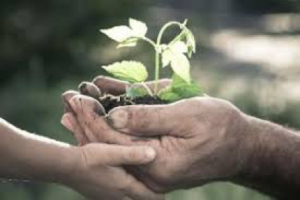 This analogy generally works well because it helps us to envision the true purpose of a planned gift: a financial gift (or seed) cultivated now that will be fully realized in the future. This analogy often works even better during periods of sweltering heat such as these, as I believe we all appreciate a cooling breeze or shade tree during the warm days of summer!

There are many definitions circulating the internet to define, clarify, and/or describe planned giving.  From a Christian perspective, planned giving is not just about the responsible utilization of our financial assets, it is also a critical component of living out the tenets of our faith. On the Presbyterian Foundation’s website, planned giving is described this way: “[planned giving] is an opportunity for us all to return to God that which God entrusted us with during our lifetime. It is also an opportunity for us all to further strengthen Christ’s church for the future by providing for ministry and mission for those who come after us. We all stand on the shoulders of those who came before us; let’s be the shoulders for those who come after us” (1). In short, planned giving allows us to use blessings of today to bless those of tomorrow. For one to begin the planned giving process, however, it is imperative for one to take an inventory of assets prior to considering charitable giving opportunities. This estate planning process is a critical first step towards planned giving.

Estate planning is the process of managing accumulated assets for the present and the future. It is a written expression of your intentions for the protection and preservation of your assets during your lifetime and their management and distribution upon your death (2). Many financial advising institutions recommend creating a list of assets, both individual and shared, to assist one with developing a complete picture of one’s financial state. This allows an individual or couple to then enter the discernment process of asset distribution. The Presbyterian Foundation offers an asset recording instrument, the Estate Planning Workbook (3), for individuals to review and complete to capture such information. Inside the workbook, information related to investments, living will directives, retirement accounts, insurance policies and other pieces of related information are addressed.

After an inventory of assets has been developed, it is now time to consider charitable planned giving opportunities. While most immediately think of a named bequest in a will, there are many other options that should be considered when planning to donate to a particular church or charitable organization. Endowment funds, appreciated securities, charitable remainder trusts, life insurance beneficiaries, and retirement accounts are just a few of the many ways one can use accumulated assets to provide for future ministry.

Participating in planned giving allows us to develop an enduring statement of faith. Thus, as one begins to engage in the planned giving process, it is often helpful to reflect on the areas of ministry that have brought us the most joy in life. For some, it may be music. For others, it may be mission and outreach. Regardless of the specific area of ministry, however, a planned gift is an excellent way to provide financial support for the given ministry for many years to come. Thanks be to God!

Olanda Carr, Jr. is the Ministry Relations Officer (MRO) serving the East Region for the Presbyterian Foundation. He works with congregations to create a culture of generosity, offers seminars and workshops, develops gifts and fundraising plans for ministries, and provides coaching to finance, stewardship and endowment committees. Olanda shares his call to the Foundation — “God calls us each day to do new and exciting things. I believe my service with the Foundation is such a call, as it provides me with an opportunity to further God’s kingdom and the mission of the PC (USA).”

What if a new technology existed that completely changed the way congregations raised funds for mission? What if there was a tool to make difficult-to-fund projects overflow with supportive donations? What if, by using a simple website, a congregation could discover hundreds of new giving units without any trouble at all? Well, I suppose if such a technology existed, we’d all be using it. As far as I know, no such a miraculous tool exists.

Today’s post is on crowdfunding and while I believe it has great potential, let me be clear: crowdfunding is no silver bullet. It is not the fundraising savior. Crowdfunding is, though, a relatively new way to think and go about funding specific projects that might be of interest for your congregation. It’s also a particular interest of mine and, therefore, the topic of today’s blog.

Around 2008, crowdfunding websites like Kickstarter, Indiegogo, GoFundMe, and dozens of others developed a new way to give money to support a particular cause, project, or vision. While there are plenty of ways to raise money online, I define crowdfunding as goal-based fundraising ventures, conducted by groups or individuals using the Internet, that seek small contributions from a large number of people. Beyond that general definition lie several different types of crowdfunding. There are campaigns in which the funder receives rewards or gifts if the project is fully funded. Other campaigns work more like traditional charity fundraisers — people give to the causes they support. Some campaigns are set up in an all-or-nothing way so, if the goal isn’t reached, the project does not go forward. In common, though, is the notion that a good crowdfunding campaign seeks to raise money for a specific goal.

Usually, we think of a church budget as a big, bulky mixture of various missional priorities. We might call funding the budget a “macro goal.” Crowdfunding thrives on “micro goals:” specific, often time-sensitive, visions of something new. As Perry Chen, a Kickstarter co-founder, has explained, potential backers see a pitch and think, “That’s really cool. I want to see it exist in the world.”

Crowdfunding is about bringing vision to life or making dreams a reality. Campaign creators describe their vision — what they think the world needs — and they ask the crowd for help. Together, they create something that wouldn’t have been possible otherwise. I’ve come to think of it this way: crowdfunding supporters don’t give away money; they midwife dreams.

What does all this pie-in-the-sky description actually look like? Well, for a church plant in Wilmington, North Carolina it meant raising $20,000 to launch a new space. St. Lydia’s Dinner Church in Brooklyn, New York has conducted several successful campaigns. For a student at Illif School of Theology, it means raising $1,100 to help her go to seminary. And dozens of faith-related music albums now exist thanks to campaigns like this one and this one. In sum, crowdfunding offers congregations and faith-related non-profits opportunities to share their vision with the world, and ask the crowd for support.

Now, I want to be clear: crowdfunding takes work, organization, coordination, some technological savvy and, most of all, a good idea. I’m really drawn to the crowdfunding world because of the possibilities that it might help the church think differently about mission and funding, but it’s no panacea. For that reason, I’ve written a guide booklet titled “Crowdfunding for Congregations and Faith-related Non-profits” that you can download as a resource. Crowdfunding may not be right for your congregation, but I do think it has potential for some. Who knows, maybe God is doing a new thing. Either way, I think the church has much to learn from the invitational language, compelling videos, and inspirational vision on display in many crowdfunding campaigns.

Adam Copeland is Director of Stewardship Leadership at Luther Seminary in St. Paul, Minnesota where he teaches as well as directs the Center for Stewardship Leaders. Having served as a rural pastor, church planter, and college professor, his scholarly interests consider stewardship and generosity, church leadership, rhetoric, and digital culture. His books include Kissing in the Chapel, Praying in the Frat House: Wrestling with Faith and College (Rowman & Littlefield, 2014), and the forthcoming Making Stewardship Whole (Westminster John Knox, 2017). He holds degrees from St. Olaf College, Columbia Theological Seminary, and is a pursing a PhD rhetoric, writing, and culture at North Dakota State University. Find him online at http://adamjcopeland.com or follow his tweets @ajc123.