Clergy affiliated with Baltimoreans United In Leadership Development (BUILD) share about their organization and its successes in Baltimore, MD.

Baltimoreans United in Leadership Development (BUILD), a local affiliate of the Industrial Areas Foundation (IAF) and Maryland’s largest citizens power organization. For thirty-five years BUILD has helped identify and develop leaders to build citizen power for change in their own communities. BUILD is responsible for the successful passage of the first living wage ordinance in the world, the largest afterschool program in Baltimore (Child First), and the rebuilding of two blighted neighborhoods – Sandtown-Winchester and the Oliver community (in partnership with The Reinvestment Fund). Recently, BUILD led the effort to secure $1.1 billion dollars in public financing for the rebuilding and renovation of more than 1/3 of Baltimore’s public school facilities, the largest single increase to neighborhood investment in Baltimore’s history.

Andrew Foster Connors is the Senior Pastor of the Brown Memorial Park Avenue Presbyterian Church in Baltimore, MD, a position he has held since 2004. A church “alive in the city and the world,” Brown Memorial Park Avenue continues to live into its mission to become a radically inclusive Christian community, sent into the world to work for God’s peace and justice. Andrew serves as clergy co-chair of BUILD and is an organizing member of NEXT Church. Andrew is a native of Raleigh, NC. He attended Duke University as a B.N. Duke Scholar where he received a B.A. in History with a focus on contemporary social movements. He holds a Master of Divinity from Columbia Theological Seminary in Decatur, GA. Andrew is married to the Rev. Kate Foster Connors, also ordained in the Presbyterian Church (USA). They live in Baltimore with their two children.

Glenna Huber has been a priest in The Diocese of Maryland since 2009. She has served as Vicar in three settings during that time with a consistent ministry at The Church of the Holy Nativity in Park Heights. Prior to joining the Diocese of Maryland Rev. Huber served for eight years in the Diocese of Atlanta her sponsoring Diocese. The Episcopal Urban Caucus, The Maryland Truth and Reconciliation education sub-committee, and Baltimoreons United in Leadership Development, a IAF affiliate, are among some of the boards and commissions on which The Rev. Huber serves. Rev. Huber earned her M. Div. at The General Theological Seminary in New York and her undergraduate at Spelman College in Atlanta. She and her husband are currently raising a 2-year-old son and a baby girl born April 2015.

Bishop Douglas Miles is a native of Baltimore. He has over 44 years of ministry experience in Baltimore, California, and Tennessee. In 1992, he organized Koinonia Baptist Church in Baltimore, which has expanded to two campuses and houses many different community outreach ministries, where he was consecrated Bishop of Koinonia. He is serving for the second time as a Clergy Co-Chair of BUILD. He has served in leadership positions with Interdenominational Ministerial Alliance, Greater Homewood Interfaith Alliance, Maryland Health Care Initiative, Baltimore Interfaith Coalition, Maryland Food Committee, and Mission Baltimore. Bishop Miles is a national award-winning columnist with the Afro-American newspaper. He has preached and lectured throughout the world lastly serving as Jellicoe Preacher at Oxford University in England and is published in a book of sermons entitled Living in Hell. He is married to the former Rosanna White, the proud father of two sons – Harvey and Dante and grandfather of five.

Each month, we post a series of blogs around a common topic. This month, MaryAnn McKibben Dana is curating reflections from our 2016 National Gathering. Watch this space for thoughts from a wide variety of folks, especially around the question, What “stuck”? What ideas, speakers, workshops or worship services are continuing to work on your heart as you envision “the church that is becoming?” We’ll be hearing from ruling elders, teaching elders, seminarians, and more. We invite you to join the conversation on Facebook and Twitter!

Am I in the right room?

Most of my life I have used this simple question to gain direction. Is the space I have placed myself, whether it be graduate school, neighborhood, or church, putting me in contact with people that reflect collectively who I want to become? 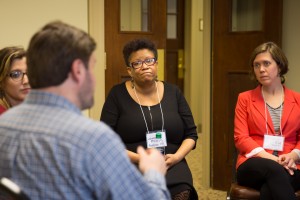 Institutions I join that are experimental, and open to new ways of being are “rooms” I will stay in. So it was inspiring to hear the way Presbyterians are redefining our “rooms” of worship at the NEXT Church National Gathering in Atlanta. Innovations like Farm Church, a new agriculturally-based Christian community in Durham focused on growing food and faith for the hungry intrigued me. Then there was Serious Ju Ju, a faith-based ministry in Montana centered on at risk teenage boys revolving around their love of skateboarding – really, how can one not love that? Both ministries have recently sprung forth and reflect new spaces of worship which excites me. So I found myself saying, “Yes!” If this is where my church is leading, I will stay.

But what has had me on edge and closer to the exit was publicly named at the conference and that is our primarily white demographic as Presbyterians. Questions were raised on how our church will respond to a world with a national legacy of structural racism born from white dominance. I was grateful to be reminded again by NEXT speakers of the vigilance needed on issues of race that I as a white American, Presbyterian, living in Baltimore, need to continue to name, own, and challenge.

While I am in the midst of this work through community organizing in Baltimore, where building relationships across racial lines is at its core, it is important to me to have the larger church own this collectively. Sharing ways we are engaging the problem of white fragility in our churches, I was reminded again of the importance of sharing public narratives of our experience with race within our congregations often.

Just as I am thrilled to hear of innovations in worship I want the church to be pioneering in the way we are being church in the racial arena. Housing voices experimenting and moving past the fear of a misstep in a conversation on race can be a space that uncovers unconscious biases that brought to light can move a people of faith into action.

I am trusting that relationships built along the way as we challenge structured systems that are racist in outcome will be fertile ground that just might change what we look like and move us to who we are called to be.

That’s the next room I want to be in!

Cheryl Finney is a ruling elder at Brown Memorial Presbyterian Church in Baltimore. A frequently challenged mother of four, she is currently working for BUILD, Baltimoreans United in Leadership Development, as a project organizer. Her current passion is working with “returning citizens” through a jobs movement of BUILD called Turnaround Tuesdays. She says, “developing leaders from the reentry community as they join the workforce and rediscover a civic life is the richest work I have ever had the privilege to do!”

We are launching a new series this month that highlights participants at the national gathering in Charlotte, North Carolina on March 4 – 5th, 2013. Presenters, preachers, teachers, and leaders were asked the same five questions and their thoughtful responses may be found here every week. The goal is to introduce you to people you’ll hear from in Charlotte and prime the pump for our time together. Hopefully, something here will spark an idea, thought, or question for you. We encourage you to reach out and initiate conversations that you can later continue in person. So without further ado … 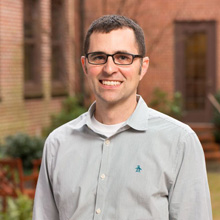 Andrew Foster Connors has served as the senior pastor of the Brown Memorial Park Avenue Presbyterian Church in Baltimore, MD since 2004. He currently serves as the clergy co-chair of BUILD, Baltimore’s largest citizen power organization, affiliated with the Industrial Areas Foundation. BUILD is responsible for the first living wage ordinance in the country, the College Bound Scholarship Program, the rehabilitation of the Sandtown and Oliver communities, as well as the largest after school program in Baltimore. He serves on the strategy team for NEXT. He is married to the Rev. Kate Foster Connors. Together they have two children, two cats, one rabbit, and two fish.

I serve a congregation of approximately 300, with a fairly even split among all age groups. The church sanctuary, built in 1870 is situated in old Baltimore neighborhood, just a few blocks from an arts college, in a zip code that includes some of the highest poverty rates in the state of Maryland. Though many of the congregants have some experience in Christian community, for many, our congregation is their first Presbyterian experience. Racial and sexual identity diversity is strong and growing.

The congregation I serve almost closed its doors in the late 1970s due to a declining city population and associated economic challenges. During that time, the congregation was forced to reinvent itself. What I see emerging from those challenges is a willingness to try and fail, a joy in creativity, and a strong connection to the parts of the past that give life, with more and more experience in the work of grieving which is necessary in order to let go of ministry that may have been meaningful in the past, but no longer relevant today. It’s these experiences that help the church continue to connect with new generations without completely disconnecting from the theological and social witness of our tradition.

My passion is broad based community organizing that views God’s locus of power for life and transformation in relationships. The tools for organizing shape my view of leadership in the pastorate, which is about organizing people to act on the parts of their faith which are most meaningful and life-giving to them and to the community we serve as disciples of Jesus Christ. For me, these tools have helped me continue to view leadership development as one of the most important roles I play, rather than the maintenance of a building, of programs, or of the status quo. These are the same tools that have also helped me act with a coalition of other faith groups, schools, and neighborhoods for justice in Baltimore.

What keeps me up at night is managing my calendar, and sometimes one of our cats.

Seeing old friends, colleagues, and debating partners, along with meeting all kinds of creative, energetic people who are excited about ministry, rather than simply depressed by the state of the church. Sharing what we’re excited about. Helping those who are struggling with specific concerns imagine new ways forward. Singing with people who like to sing. Identifying new leaders and finding ways to support them.