Each month, we post a series of blogs around a common topic. This month, Linda Kurtz is curating a series we’re affectionately referring to as our NEXT Church book club, which aims to share insights on a variety of texts – and how they have impacted our bloggers’ ministries. Understanding that reading in and beyond one’s field is important to offering good leadership, we offer this series to get your juices flowing on what books you might read next. What are you reading that’s impacting how you think about and/or do ministry? We invite you to join the conversation on Facebook and Twitter!

What happens when ministry requires you to not only get dirty, but funky? Dirt can be brushed away but funk in its true vernacular saturates everything and lingers in the atmosphere. The word “funk” as a noun can be defined as “a state of paralyzing fear; a depressed state of mind.” As a verb, the word “funk” is defined as “a strong offensive smell.” Doing ministry in the funk of life embraces not only the noun and verb described here but even evokes the other noun that defines “funk” as a music that combines rhythm and blues as well as soul music that is percussive, harmonic, and filled with bass and heavy downbeats. 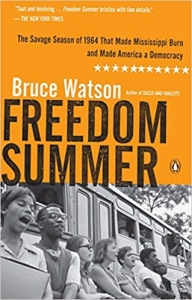 In Bruce Watson’s book entitled Freedom Summer: The Savage Season of 1964 That Made Mississippi Burn and Made America A Democracy, I found a tantalizing tale of sanctuary and sanctity in the midst of savagery. In the midst of the sunflowers and the Delta topsoil was the brutal and arid landscape of segregation which was fertilized by terror perpetrated upon African-Americans in the American South. This terror consisted in the form of lynching, rape, and death threats as black people in the American South attempted to register to vote. Joining in this struggle were thousands of college students of all races who found themselves spending an entire summer as a part of The Freedom Summer Project which consisted of voter registration, the Freedom Schools, and the Mississippi Freedom Democratic Party.

In chapter five of the book, entitled “It Is Sure Enough Changing,” the narrative begins: “On his first full day in Mississippi, Fred Wynn tore down an outhouse and turned it into bookshelves.” According to Watson, this outhouse stood behind a two-room shack on a road that divided sections of the black community and these places had names like Jerusalem and Sanctified Quarters. The shack was to become Ruleville’s Freedom School. What makes this image so powerful was twenty volunteers, black and white, male and female, native and foreign-born came together and created a sanctuary of empowerment for black citizens of Mississippi.

When I reflect on my ministry contexts, they – like the book Freedom Summer – center around a cultural, radical, educational, and empowering love-centered ethic. First, I serve as an associate pastor at Faith Community Baptist Church, a church located in the east end of the city of Richmond, Virginia. The senior pastor and founding visionary, the Rev. Dr. Patricia Gould-Champ, was given by God a vision and mission which focuses on three public housing communities: Fairfield, Whitcomb and Creighton Courts. In my second ministry context, I serve as a circulation supervisor at the William Smith Morton Library on the campus of Union Presbyterian Seminary.

In my former ministry context, I am learning how to do intentional authentic ministry in the midst of a radicalized sanctuary space whose external wall is adorned with a “Black Lives Matter” banner. At Faith Community Baptist Church, there is always a call to action to not only transform the Jericho Road as evidenced in Luke 10:25-37, but to remind those who abandon and/or walk away from our oppressed brothers and sisters left on the side of the road their need to be responsible and accountable to our community. Often individuals can center themselves around the sound bites of ministry which involve teaching and preaching. The grunt work like the tearing down of the outhouse to create bookshelves in the intense, oppressive heat of the day causes a disorientation that places us in the center of social justice for the least of these, those whose names and places of habitation are scandalized and stereotyped.

In my latter ministry context I take everything I have learned in the former and introduce it to the latter, creating and developing a sanctuary of holy dialogue and a pedagogy of the funk. This pedagogy will allow us to embrace what my pastor always calls “on the job revelation” that is not often in the books as it relates to our unique ministry context. In the midst of our feelings of inadequacy, we must trust God in the heat and offensive smells of the “isms” that oppress us and learn a new language and a new song.

Now we endure a political system in America along with a societal malaise that reeks of reality TV and narcissistic patriotism that diminishes, demeans, demotes, and demolishes. I think that every American citizen should read Freedom Summer and that it should be a required text in our school systems. I would only advise that when they get to chapter five, they allow the definition of a outhouse to be examined in order to understand that democracies are not made by avoiding that which stinks; they are only created by facing the collective funk of life together as a beloved community and creating something sacred and noble that will benefit all who encounter it.

Lisa R. Janes is an artist, teacher, curriculum developer and minister who serves as an Associate Pastor at Faith Community Baptist Church and Circulation Supervisor at the William Smith Morton Library on the Richmond campus of Union Presbyterian Seminary. She is also currently working on a social media project on Instagram which is a return to her artist and teaching roots. This project entitled “godintheskin” is a blend of music, politics, social history, spirituality, and art. Her goal is also to complete a book based on her experiences on Instagram and how it is shaping her faith journey.

“It has been my experience that resolutions occurring at the national level of the church do not trickle down and do not have tangible impact at the local level. Despite the resolution’s merit in naming the diminution of black Presbyterian congregations as a significant problem, it does virtually nothing to stem the tide. Not to mention, it fails to connect to similar efforts of previous assemblies”

Resolutions are a grand way for an institution to make public statements about issues regarding either a part or whole of a body. Very often, at their core, the resolutions typically hold the studied opinions of those who penned them. They will cause emotive expressions of support, rejection, or lack of care to that small percentage of the institution who actually read them. Unfortunately, an enormous amount of time and effort goes in to denominational resolutions. I think they are necessary more so for those outside the denomination. “Others” will look for documents such as these to learn a particular stance of a denomination. It is just that, a denominational stance, and not an individual stance. We are not the denomination but a part of. This is where the problems lie. 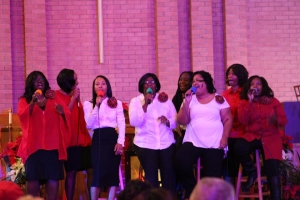 The “diminution of black Presbyterian congregations” is a serious problem as well as the diminution of Presbyterian congregations, no matter the ethnic background. With the rapid growth of non-denominational mega-churches coupled with the increasing number of families opting out of organized religion all together, we all stand at a crossroad of an “if-then” reality. As much as I personally love the structure of the PCUSA, it is archaic at its core and makes it difficult to maneuver with certain freedoms at certain levels if one does not fully understand the constitution. When the government of the church has very similar qualities of the federal government it poses a problem with those who are ill at ease with the federal government and the church.

This is not great for promoting the institution. Pew Research Center reports that 40% of churched African Americans are Baptist. The closest to that is Pentecostal with 6%. 8 out of 10 African Americans report that religion is important to them. The Presbyterian church is the total antithesis of the Baptist church. The Pentecostal church is even further distanced from Presbyterianism. The PCUSA is fighting a historic battle with how African Americans worship. We are a highly educated, financially charged, and white institution trying to attract a historically oppressed, undereducated, financially underserved people. Our African American numbers should come at no surprise to anyone.

I left the Baptist church after 45 years. The majority of my African American friends are Baptist and many of them have left the Presbyterian church to become Baptist. I left because I felt that as a woman in ministry my opportunities would be greater outside the Baptist church. Additionally, I found the governance of the Baptist church oppressive. If I had not been in leadership I am not positive that I would have made the change. As a leader in the church it made sense to me. As a layperson, it really didn’t matter as much. Most church attendees are not in leadership and, as in most denominations, do not understand the nuances of the government. Therefore, it really does not affect them in the same way.

Worship style has some bearing on the public opinion, but I honestly think that has less to do with the declining numbers than a missed comradery. What can the PCUSA do about that? Perhaps launch a nationwide campaign to African Americans which speaks to freedom of thought, speech, and governance, and encourage African American congregations to invite their congregations to offer a contemporary service to attract those with a more charismatic background. With that encouragement will have to come financial support to hire worthy musicians to include vocalists to assist in worship. This is an expensive undertaking, but in order to attract African Americans we will have to change the perception of the PCUSA. Without changing the perception, the numbers will continue to decline as our older members pass away.

Amantha Barbee is pastor of Statesville Avenue Presbyterian Church and chair of the Charlotte Clergy Coalition for Justice. She stood between protesters and police with other interfaith clergy when Keith Scott was killed by police in 2016. She is a recipient of the Charlotte City Center Partners Special Achievement Award.