The book that is providing theological perspective and inspiration for me these days is Spirit in the Dark: A Religious History of Racial Aesthetics by Josef Sorett. It is a work that examines the African-American cultural movements and their artistic offspring. From the New Negro Renaissance of the 1920’s through the Black Arts movement, Dr. Sorett examines the pervasive effect religion plays on these commonly seen as secular literary visions. This work is exciting because it puts religion in conversation with the secular and in doing so allows the church/religion to erase the divide between what is inside and what is outside of the church walls, or the boundaries of religious life.

Spirit in the Dark does not attempt to answer the question, “How does the church make itself relevant in the secular world?” It lays claim to the ways in which the division between the sacred and the secular is an artificial one. In fact, it sees the religious as an integral ingredient in the African-American literary tradition. 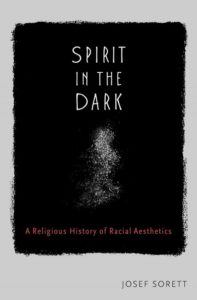 Church book study group leaders will find this book extremely helpful in training the eyes and ears to the religious undercurrents in the secular literary tradition. As Dr. Sorett’s work deals with the African-American experience, the culminating lessons are also applicable or at least adaptable for many different communities. It is just that in Spirit in the Dark, Sorett’s impressive research makes clear that the African-American experience is one that able to be clearly defined and claimed as such in this rich tapestry of literary tradition and can serve as a model to other communities.

Specifically, it frees the preacher up to understand that the literary resource of the African-American literary tradition is ripe for bringing in texts to be in conversation with the Bible and the community. It also provides a way for preachers and pastors to parse culture without giving in to the demand to “do something new to fill the pews” by watering down the theological foundations upon which their churches and communities are built. This is an important book and readers will definitely find their own jewels within.

Rev. Derrick McQueen, Ph.D., serves as Assistant Director for The Center on African American Religion, Sexual Politics and Social Justice (CARSS) at Columbia University. He is also serving as pastor to St. James Presbyterian Church in Harlem, N.Y., and is an adjunct professor of Worship and Preaching at Lancaster Theological Seminary. Derrick has been actively involved in work for LGBTQ inclusion in churches and society, facilitating dialogues and serving on the boards of such organizations as Presbyterian Welcome, That All May Freely Serve, More Light Presbyterians and Auburn Seminary. Recently he served as the Moderator of the Presbytery of New York City.

Meditations of the Heart by Howard Thurman “Sheds a Little Light”

Are the Spiritual but Not Religious Turning East?
Scroll to top