Twenty-five years ago, I was a young pastor in Naples, Florida, and got a hard lesson on power. Our congregation operated a preschool in a relatively small room in our church building and wanted to move it to a house that we owned next door to the church. The house had a wonderful open floor plan, a large backyard that would be perfect for a playground, and a circular drive out front to make drop off and pick up relatively simple. To move the preschool required a zoning variance. So, we hired an engineering firm and an attorney, and prepared to make our case. A few of the neighbors we enthusiastic supporters; most had no objections.

Most. One key neighbor was opposed to the notion, and he had friends on the city council. When we made our case before the city council, one of his friends actually got up and left the room during our testimony and came back just in time to vote no. And so did his other friends. I naively assumed that since we had good intentions, we were good neighbors, and the city needed more preschool spaces, we would get the zoning variance. I had my head in the world as it should be and neglected to pay attention to the world as it is. 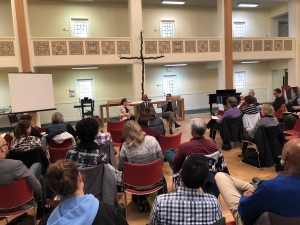 Participants in the 2018 organizing cohort learn from a panel of clergy.

It’s not enough to have good intentions if we want to accomplish good things. In order to act, one has to have power. Broad based organizing is about organizing people and organizing money so that one can act. That’s the exercise of power, the ability to act. Since that difficult and expensive lesson, I have seen organized people and organized money get things done; it works.

The exercise of relational power is countercultural and counter-intuitive. It is not the way we are taught or formed. “You can’t fight city hall,” we say, symptomatic of our willingness to give away our power and bow to the systems, structures, and powerful individuals. Building relational power is a way to take back the ability to act in the public realm.

Acts of resistance are also part of exercising this power, especially when resistance is undertaken in community. Part of our baptismal identity is to resist the structures and manifestations of evil, those forces that defy God. So, in this sense, it is also a subversive power, a countercultural means of throwing a wrench into the gears of the systems and structures that work against human thriving.

Though I am committed to doing the work of the kingdom by the arts and practices of organizing and exercising relational power, there are still points of tension for me. I still struggle with the paradox of exercising power vis-a-vis the theology of the cross. In the theology of the cross, power is exercised in the contrary — strength through weakness, wisdom through folly. The theology of the cross supposes that God acted most powerfully to reclaim, redeem, and reconcile the world through the humiliating and shameful crucifixion of Jesus. Paul builds on this notion in 1 Corinthians 1 when he says that God’s ultimate power is demonstrated through human weakness and God’s wisdom through human folly. God works not through coercion, but through love; inviting rather than coercing.

I believe God has intentions for the world and calls the church to work for the sake of enacting those intentions. In over 30 years of pastoral ministry, this exercise of relational power is the most effective means I’ve seen to get that work done.

Jim Honig is pastor with the people of Shepherd of the Bay Lutheran Church in northern Door County, Wisconsin. He is a writer, blogger, and the author of the novel, By Paths Untrodden. He is passionate about congregation based organizing and trying to figure out how that works in a new context after spending 15 years in the Chicago suburbs.