Children’s Sunday school classes are notorious for bad biblical interpretation. We’ve all bemoaned the well-intentioned volunteer who teaches Bible lessons with an agenda for simply making well-behaved children. Every Bible story has moral lesson to them, usually something to the effect that God wants us to not hit our siblings, be nice to our peers, and share our toys. Nice lessons, but not exactly anything our non-Christian neighbors aren’t teaching their children either. Suffice it to say, Sunday school classes like this really aren’t teaching the Christian faith so much as they’re teaching Christian moralism. 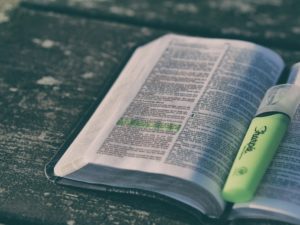 Yet, many of us are only preaching to the adults a more sophisticated moralism. Sermons that preach justice are the adult version of bad children’s Sunday school classes. The scriptures we interpret have a moral lesson to them, usually something to the effect that God wants us to practice non-violent resistance (aka don’t hit our siblings), be radically inclusive (aka be nice to our peers), and work towards economic equality (aka share our toys). Nice lessons, but not exactly anything left-wing activists aren’t blogging about either. This kind of preaching isn’t teaching the Christian faith. No matter how just the cause we think we think the scripture is telling us we must do, this is still an exhortation to moralism.

Ironically, this is really the other side of the conservative moralistic coin that so many of us have outright rejected. We have rightly discerned that a steady diet of sermons extolling virtuous habits and condemning personal vices has not helped those in the pews. Droning on about sexual purity, modesty, temperance, and obeying authorities induces a culture of shame. Telling people to pray harder, read their bible more, and start sinning less becomes tiring. However, progressive moralism simply substitutes a different set of virtues and vices while telling congregants to check their privilege harder, listen to NPR more, and start consuming less. In the end both sides of the moralistic coin – conservative and progressive – are exhausting. Even as we may congratulate ourselves for speaking “prophetically,” our congregations slowly suffer under the weight of the obligations we have placed upon them.

The life, death, and resurrection of Jesus was meant to destroy the moralism so endemic to our attempts of pursuing the divine. In the Bible, we see this in the running rhetorical battles between Jesus and the religious elites, but it is also a point Saint Paul has to make repeatedly in his letters to his burgeoning churches.

The antidote to moralism then is the gospel. The gospel consequently stands in opposition to moralism, even moralism drawn from the Bible and in service to justice.

The gospel does this by showing how Jesus’ life, death, and resurrection is substitutionary for us. This is often portrayed narrowly by our evangelical friends as a substitution for punishment or debt, where Jesus atones for the sin of humanity. Yet this misses the wider and more historical nature of substitution, and that is a substitution for our own efforts. We are never virtuous enough, whether those are the morals most prized by conservatives or progressives. We are always complicit in some sort of sin, whether those are vices are deeply personal of part of wider systemic injustices. Christ, however, is the new Adam, succeeding in every place where we could possibly fail. The futility of human moralism is substituted for the grace of God.

The gospel then, by way of the cross, heralds God’s victory over what would otherwise be a hopeless situation. This is a victory over my personal sin and our systemic injustices.

The only way our preaching of justice can move beyond sophisticated moralism is by always proclaiming the gospel alongside it, and articulating the substitutionary work of Christ on behalf of individuals, communities, and structures. Rather than being a counterfeit gospel that awkwardly parrots left-wing politics, our calls to the justice must flow from the countercultural implications of the gospel. Internalizing this foundational facet of the gospel allows me then to work for justice not out of a need to feel personally justified or become the agent of political salvation, but rather because I am gratefully responding to the reality I have already been justified before God and saved for the work of reconciliation.

Preaching the gospel at all times becomes both the cure for progressive moralism and the booster shot for our congregations in understanding unique nature of justice in Christian theology.

Once we do this, then can turn to the more difficult task of fixing children’s Sunday School classes.

Colin Kerr is the founding pastor of Parkside Church, a Presbyterian new church development. He previously spent eight years assisting historic congregations with church renewal strategies and planting a new multi-campus college ministry, which grew to become one of the largest Presbyterian college ministries in the nation. He lives in Charleston, South Carolina with his wife and daughter. His new book, Faith Hope Love: The Essentials of Christianity for the Curious, Confused and Skeptical, will be released this fall.

Loving the Earth Boldly as People of Faith