“It has been my experience that resolutions occurring at the national level of the church do not trickle down and do not have tangible impact at the local level. Despite the resolution’s merit in naming the diminution of black Presbyterian congregations as a significant problem, it does virtually nothing to stem the tide. Not to mention, it fails to connect to similar efforts of previous assemblies.”

The critique of the resolution is correct – no General Assembly action will reverse the decline of black Presbyterian congregations and lead to numerical membership growth. If the desire of the resolution is for the General Assembly to assess and address what keeps potential members from joining or even visiting black Presbyterian congregations, then this statement is correct: “resolutions occurring at the national level do not have tangible impact at the local level…[the resolution] does virtually nothing to stem the tide [of diminution].” 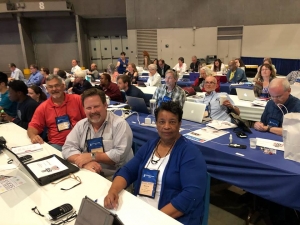 However I am also assuming that the concern of the critic is the numerical diminution – reduction or dwindling – of congregational membership and not the equally plausible lessening or weakening of an important voice at Presbyterian tables. Could the critic of the resolution also be talking about the minimizing of influence and power of black congregations in the life of their mid-councils?

The resolution acknowledges that such decline is taking place as an intentional result or apathetic neglect as black committee members are discouraged from sharing their perspectives, committees on representation in particular presbyteries are not doing the work to ensure voices from black presbyterian congregations are represented around Presbyterian tables of influence, there is not flexibility in an ordination process seems too rigorous for seminary graduates that opt to drop out of the ordination process, capable young adults in black congregations are not being mentored to be vocal members at tables of leadership, or black Presbyterian congregations are allowed to extend calls to non-Presbyterian pastors who may not value our connectional system nor feel compelled to participate in the life of the church beyond congregations of call. Each of these charges in the resolution could very well be part of what the critic calls the “diminution of black Presbyterian congregations” – a systemic lessening of influence in addition to numbers.

Last but not least I think the critic missed an important opportunity to applaud and further advance a concern raised in the resolution that challenges those who claim to value “voices long silenced.” The critic should have noticed that a resolution concerned with a marginalized community does not adequately address those on the margins of this same marginalized community. It should be applauded that this resolution asks that research be done to address the reality that African American Presbyterian congregations are slow, at best, to extend calls to female clergy. Such a study would document a well-known problem. However, I’m disappointed that neither the resolution nor the critic of the resolution share similar concerns for our out and proud queer clergy colleagues without pastoral calls. I have no doubt that a study of those who are extended calls to serve black Presbyterian congregations will also reveal that LGBTQ colleagues are under represented at rates that reveal some are black-balled from the call process to serve black Presbyterian congregations.

At a recent General Assembly, Rev. Jim Reese shared that black Presbyterians “stayed” at tables designed to restrict their presence and reduce the influence of their voice. It appears that both critic and authors of the resolution agree that not much has changed. I also agree with both critic and resolution authors that there is a great deal of work to be done with and within black congregations that will help us embody today the proud legacy that we inherited from our foreparents.

The Yeast from Durham
0 replies

The Church that is Becoming

Changing the Perception
Scroll to top