“The only real voyage of discovery consists not in seeking new landscapes but in having new eyes.” Marcel Prou

This was my fifth attempt to visit “The Holy Land.” My aspiration was not big. I just wanted to be part of a group traveling there, visit biblical sites, and perhaps come back with new eyes for seeing.

Each of the first four attempts failed, even when I scheduled a Mediterranean cruise for my husband and me with two ports in Israel. The ship was diverted because of conflict in the region. I began to think this was a bucket list item I would not accomplish — until I saw the NEXT Church announcement.

Though a little weary of trying, I applied to go on the pilgrimage and requested a scholarship, and once accepted, I dutifully paid my installments as directed. It looked like I was finally going to Israel-Palestine, until about 2 weeks before our departure, when I became increasingly congested with asthma. I visited my pulmonologist, who gave me an emergency pack for the trip, and dutifully took my meds until flight time with a promise from pilgrimage leaders that they would help me through the challenges that the landscape and heat would bring. And they did beyond my expectations.

After a 4:00AM wakeup in DC, on May 19, to make a 10:00AM flight to New York, an unexpected coughing attack driving through Rock Creek Park to the airport threatened to turn me around to go back home. I made it to the airport, followed by an unexpectedly easy and fully accepted check-in for our 11-hour flight on El Al, only to hit the ground running in Tel Aviv at 5:00AM the next day, with a full day of pilgrimaging. As we rode to Bethlehem, the beauty of the city, the starkness of the desert, and the vastness of the land struck me immediately. It was a 48-hour, nonstop beginning!

A purpose of our pilgrimage was to learn about the Israeli-Palestinian conflict and to compare it to systemic racism in the U.S. In Bethlehem, we met with Dr. Mitri Raheb, Pastor of Christmas Lutheran Church, and founder and president of Dar al- Kalima University College of Arts and Culture. Dr. Raheb is the most widely published Palestinian theologian to date, and he was ready to give us a lesson on the Israeli occupation of Palestine. 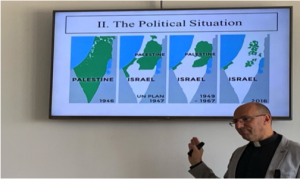 Dr. Raheb showed us the progression of the Israeli occupation — from a whole Palestine in 1946 to only a smattering of land today. He advised us of how the occupation is not only land-based, but also psychological; he showed us the extent of the occupation of land, resources, airspace, and the narrative. Israelis occupy water resources by giving residents colored water tanks. Israelis get white tanks with unlimited water access, and Palestinians get black tanks with access only three days a week. Israelis also control the narrative — “the Palestinians are violent.”

Compare the distribution of resources and the Israeli occupation of the narrative with racism in America, where the distribution of wealth, land, and resources systematically favors white Americans. Where the narrative about African-Americans in the U.S., or the black countries on the African continent, or the neighboring migrants seeking asylum in the U.S. from Mexico, or the oppression of people of color anywhere on the planet, favors a white perspective. I recently learned of how the narrative of black people is controlled even in our sacred Christian texts. The Biblical narrative we receive is the Roman narrative, with a few disparaging mentions of black characters, such as Simon of Cyrene, carrying Jesus’ cross, and an Ethiopian eunuch chatting with Paul. No mention of the Ethiopian Empire of Axum or how the Ethiopian Christians might have played a significant role in evangelizing Africa, including West Africa, where scholar John Mbiti states that Christianity was evident as early as the third century.

We were advised not to react. So, I struggled for control as I heard an Israeli military officer very matter-of-factly speak of random raids of Palestinian homes in the middle of the night, tying and blindfolding the male inhabitants and taking them out to the desert. He said, “We don’t have to kill many of them. Their minds will do more harm than we can by killing them.” He described these tactical incidents, with no sense of remorse, until the Palestinian woman with him spoke of the trauma these raids impose on the Palestinian women and children. I saw him put his thumb and forefinger to the bridge of his nose, apparently trying to abate tears. How awful! Yet, how familiar to the police raids in areas of concentrated poverty in the U.S. This was horrifying, and my most challenging moment.

We also visited The Tent of Nations, where Palestinian Christian Dauod Nasser has papers for his land near an Israeli settlement. With certain self-determination, he maintains his rights and offers an olive branch of peace to the world that visits him. Dauod shows the same love, openness, and desire for peace to his oppressor that African Americans have shown to theirs for centuries. We visited a school where the self-determination of Palestinian women care for those held in a refugee encampment made of narrow ally ways, teaching them the basics for survival and feeding them. We also visited an encampment where the children live. Not wanting anything but a smile and greeting in return, they ran to us to say, “hello.” These are also the qualities I often see at home in the self-determination of black and brown people in the U.S., so now I know pilgrimage is having new eyes for seeing, and hoping, and continuing….

Therese Taylor-Stinson is a retired Federal Senior Program Analyst and former expert on Federal regulatory activity, where she also served as a lead mediator for Equal Employment Opportunity disputes across Government. She is an ordained deacon and ruling elder in the Presbyterian Church (USA) and served as Moderator of National Capital Presbytery in 2016. A graduate of the Shalem Institute for Spiritual Formation, Therese is a spiritual director in private practice for well over a decade and a member of the Shalem Society for Contemplative Leadership. She was also commissioned associate faculty for Shalem’s Personal Spiritual Deepening Program. Therese is the founder and organizer of the Racial Awareness Festival held in Washington DC, supported by National Capital Presbytery.

Pilgrimage is an Endless, Tameless Endeavor of Hearts

Pilgrimage as an Altar
Scroll to top