As a handful of our group walked through the streets of Bethlehem after dinner one night, the wash of street lights and glow of neon signs dimly lit our way, while the city came alive with Muslim neighbors breaking their Ramadan fast. Families did their shopping, car horns blared, and street vendors advertised their wares. Into my head wandered words I’ve heard probably every December of my life: “O little town of Bethlehem, how still we see thee lie…” 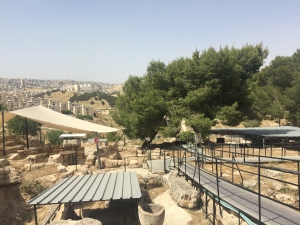 I was struck by just how different these moments felt from deep and dreamless sleep. Not to mention that in the distance loomed the harsh concrete slabs of The Wall, snaking through the soft hills where Jesus was born. During our time in Bethlehem we visited the site said to be where the angels appeared to the shepherds and announced Jesus’ birth. As we stood at the entrance to a cave that would have protected the flocks from nighttime predators, closed-off boardwalks criss-crossed our view and Israeli settlements sprawled on the ridge lines.

A few days later we were walking again, this time through the Old City of Jerusalem. We arrived at the Church of the Holy Sepulchre and, as we went inside, there wasn’t much option but to follow the slow, consistent flow of shoulder-to-shoulder foot traffic winding through the dim interior of the complex. Nudged along by the people behind us, we followed a narrow staircase up, past the place where some say Jesus was crucified, back down to where Helena is said to have found the “true cross,” wound around and eventually emerged back into the main space that included the tomb where Jesus might have been buried and resurrected. The line to see the tomb’s interior wrapped around the room and was longer than our timeframe allowed. The building felt so complicated and crowded that I remember wondering how long it would take me to find my way out if I was separated from our group.

Pilgrimage is not what I expected. Anticipating our trip, I was amazed at the number of familiar biblical names on the itinerary. But honestly, the act of setting foot on many of the holy sites we visited just wasn’t as moving as I thought it would be. The ornate churches built around these places began to feel almost intrusive. The institutional regulation limiting access — sometimes literally dividing a building in half — seemed to grate against what I know of an arms-wide-open God. I had no doubt that these places were powerful, but, at the same time, I wondered if we humans were getting a little too close to putting God in a box. 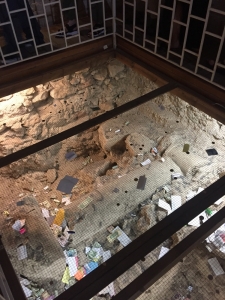 Prayers and offerings left by pilgrims at the Wedding Church at Cana (Kafr Kanna, Israel). Notice the column laying horizontally, repurposed from Byzantine ruins to become part of a later wall. (Allison Wehrung)

And yet, for hundreds of years, pilgrims have found their way to these sacred places. Despite the dissonance I felt during some of our holy site stops, I was struck by remnants representing the people who had come before us. Many of the structures we saw are relatively modern, but are built on top of older sanctuaries that were built on top of still older ones, located where they are because before that they were synagogues or other sacred ground. Destroyed and rebuilt, again and again, each time using the rubble of what was as the foundation for what would come to be. Across time and tradition, God had met people there. Even in the midst of humanity’s brokenness, God continues to meet people there. I found myself particularly captivated by the small paper prayers folded into cracks and crevices — tangible signs left behind by believers who could have been desperate or joyful or anything in between.

I came to realize that, at least for me, the power in our visits to holy sites wasn’t about the buildings at all, beautiful as they are, or sometimes even about the ground beneath them. This part of our pilgrimage reminded me that, despite the particulars of how we each live out our faith, we are part of something far bigger than ourselves. Being a person is messy and Christianity definitely isn’t perfect either. But maybe the words of “O Little Town of Bethlehem” fit after all: “The hopes and fears of all the years are met in thee tonight…”

Rev. Allison Wehrung lives in Oxford, MS where she is the Presbytery of St. Andrew’s Associate Executive Presbyter for Campus Ministry and the Campus Minister at UKirk Ole Miss. She is a maker and lover of recycled art, handwritten letters, coffee, and her favorite Southern vegetable (macaroni and cheese).

Pilgrimage is in the Leaving
Scroll to top