I do not know what my expectation was for the pilgrimage before we boarded the plane for Tel Aviv. I think I wanted to see holy sites and be open to letting God work in my life. I was seeking renewal. I realized in reading and preparing for the trip, I had been willfully ignorant about the situation with Israel and Palestine. Learning about the conflict made me realize the pilgrimage would not be as straightforward and inwardly focused as I had originally thought, but I was hoping to make the journey without setting too many expectations, without limiting myself by seeking a certain place, feeling, or experience.

I found each place we traveled to, both in Israel and Palestine, whether incredibly new or old, was a place where people felt connected to the land and in many places expressed that through various forms of art. From holy sites from 2,000-plus years ago to schools, farms, and settlements in the present, God has always sought us out where we are, in our bodies, embodied, so this makes sense that we humans would mark these experiences of the holy in our lives with art.

The art exhibit Limitless at The Walled Off Hotel gave me a window into the people of Palestine. Yes, it is a tourist attraction (misery tourism as one of our trip leaders called it). And yes, I was moved by the gallery as well as the exhibits without and within the hotel and think tourists should keep going there. If there is a giant symbol of a problem, like a border wall that separates two groups of people, should not a person take the opportunity to go touch it, to know it exists and to empathize with the people whose lives it affects daily? With the artist Banksy taking the creative lead, the wall outside the Walled Off Hotel has become a mural and recorder of this moment in history with images as well as stories from the people. This wall, which once was not a part of their holy land, has now become a part of them. 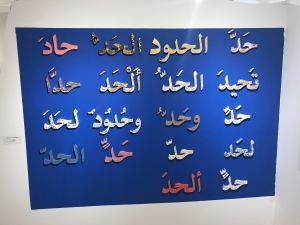 Inside the small art gallery, just inside the border wall in Bethlehem, is a small collection from some of the most influential and well-known Palestinian artists, along with some newcomers. The collection is called Limitless after a piece by Mahdi Baraghithi, titled Had. I asked the woman working in the gallery to tell me about Had and she explained that all of the words on the bright blue canvas are variations with the same root of the word limit — to be limited, limitless, and so on.

Looking around, there was a painting by Nabil Anani titled Border with a woman sitting on her suitcase, as if posed, with the wall as the backdrop, cutting off and hiding the bottoms of the buildings it conceals behind it. Looking to the other side of the gallery there are two canvases with little boys doing jumps and tricks, like at a skatepark, but with the wall as their ramp. Mohammed Al Hawajri created another pair that looks like magical realism come alive. In one piece a man and woman float, the man holding on to the woman, above the wall, flying past the limit since they are not allowed to pass any other way. In the other piece a couple is on a rooftop near the wall and the man’s feet are firmly planted on the roof while the woman floats like a balloon on a string, the image suggesting that some force is drawing her toward the open air space over the wall. These Palestinian artists seem to say that if their bodies must live with limits, they at least have no boundaries imposed on their art.

Pilgrimage is in the people, past and present. Seeking the holy through the art of the Holy Land led me back to hope. I think hope is found in the relationships we make, the stories we carry with us from scripture that are our tradition of hope, and in creating new means of expressing hope, to which the artists of Palestine bear witness. This was my experience of pilgrimage in the Holy Land.

As we progressed through holy sites and met amazing people doing amazing things for youth and children in Palestine, I thought about how much is needed in my own community. I do not want to ignore the need for reconciliation, education, and human rights in Palestine, but I left feeling a renewed calling to be awake to the human bodies within a mile of my own home that do not enjoy the same safety, education, and standards of living that I do. Hope is big enough for all of us and we know that God cares for every body.

Lydia Kane is a parent, spouse, and educator living in Tarboro, NC with her family. She has studied literature, theology, and special education and loves seeking out ways for those three fields to intersect.

Pilgrimage is in the Resistance

Pilgrimage is an Endless, Tameless Endeavor of Hearts
Scroll to top