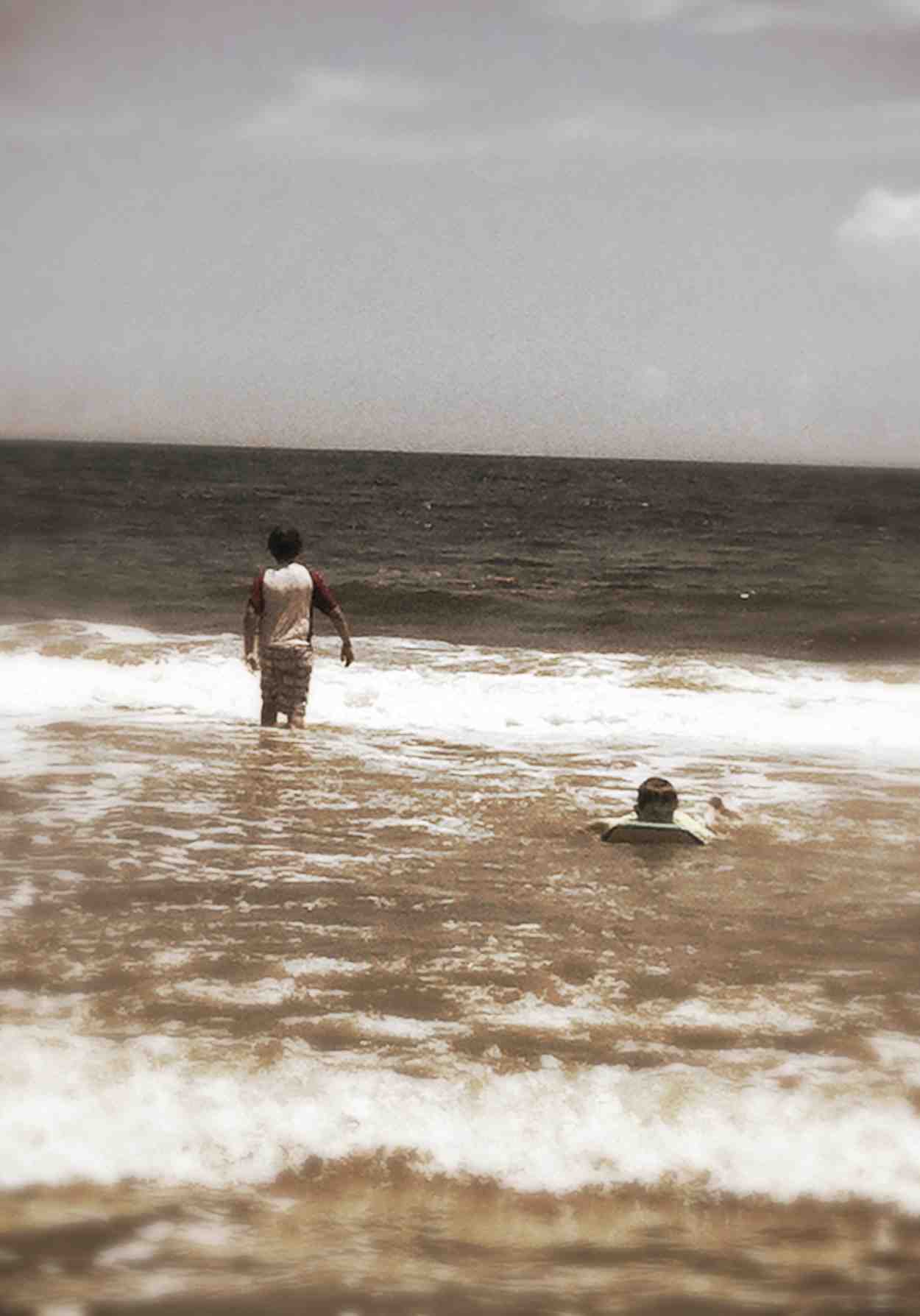 It’s around 11am, and our family is at the beach. It rained the first few days here, but now the sun is shining bright and the place is packed.  We’ve carved out a few square feet of sand for our two folding chairs.  We won’t need much room, though, because the majority of the Lindsleys will be out in the water, out in the waves. I’ve always loved the body surfing/boogie-boarding thing, and I’m proud to have passed that same love on to my sons.

It’s different being out there as a father, though.  It’s a bit of a juggling act between satisfying your own desires to enjoy the waves while owning up to your parental obligations.  I have to shelve my desire to plunge headfirst into the oncoming wave to make sure my kids are safe.  And “safe” in the ocean is always a tricky thing – that huge wave that doesn’t materialize until its right on you, undercurrents and rip currents, and all the unforeseen marine life that – as I’ve had personal experience with – can cause, ahem, severe complications.

What makes it even more of a challenge is the difference between my two boys.  My oldest shares my tendency to throw himself into something with reckless abandon.  I want to go out to the big waves, he tells me.   We can’t, the lifeguard says there are rip currents out there, I answer.  What does he know, he’s way back there in the lifeguard chair!  And so it goes.  My younger son, though, is much more tentative.  Or “smart,” as his mother would say.  He may want to follow his Dad and older brother, but for him, the threat overrides the potential thrill.  But he’s not going to sit up in the beach chair, either.  So in his mind he’s determined the parameters of how far he’ll go into the surf, and he’s not about to exceed it.

It’s a lot to manage.  In fact, it actually feels a lot like being a pastor.

The waves of change are swirling around the church in a big way these days, and in many ways it’s been going on for years.  Much of this change – all of it, perhaps – has come from the outside: civil rights movement, women’s liberation, postmodernism, gay marriage and stances on homosexuality, the equalizing of the human experience via mass technology and social media.  I could go on and on.

The point is, the church is facing change whether we like it or not. And we differ greatly on how we respond to and cultivate that change, even within a single congregation.

Some folks are like my older son, feeling the urge to plunge head-first into the waves of change.  Why delay the inevitable?  Things like the emergent church, contemporary worship, congregations that look more like coffee houses and even NEXT Church in my denomination are signs of those who recognize that the wave is coming – so why not go and meet it?  We know we can’t “change the change” any more than my son or I can alter the direction of the wave that’s heading straight for us – as my friend and fellow songster David Lamotte sings, “The water’s gonna win.”  As does change.  Why fight something that is going to happen with you or without you?

Hold on, say people like my younger son.  For these, change – like the waves – are not just a sign of something different, but the essence of the difference itself.  And the very fact that “it” can’t be stopped elicits fear – or, as writer Diana Butler Bass suggests in her recent book, grief over the loss of what was familiar and comfortable.  There are degrees to this category of folks.  Some remain stubbornly on the shore, plopped down in the beach chair and observing the change from a safe distance.  Others, like my younger son, may wade in the surf, but only up to a point.  They engage change in the church with conditions and qualifiers: contemporary music… but only at the early service.  Women in positions of leadership… but not the lead pastor.  Acceptance of gays and lesbians for church membership… but not for ordination.

And there’s the pastor in the middle of it all.  They’re standing in the surf, calling out to one group of folks to come back, not so fast, wait up for everyone else.  And they’re calling out to others: come on in, it’s not so bad, you’ll be alright.  They’re well aware of the threats that can be seen – all those undercurrents and rip currents swirling around them – as well as the threats no one can see yet.   They’re trying to care for people and help them meet their needs, while also caring for the church and meeting God’s needs.

I got to thinking about this while scanning my Facebook feed this morning and coming upon this from The 70 Sent Project:

The church is a paradoxical mixture between the desire to transform a world that clings to old forms and prejudices, and the desire to find stability and peace in a world that is changing too rapidly. Often this paradox is found within the same person.  The role of the church leader is to stand in the middle of this paradox, facilitating the flow of the Holy Spirit between the transforming and stabilizing impulses. (emphasis mine)

That’s the huge task facing pastors and all church leaders in today’s church: not trying to be everything to everyone, a common misconception (and the cause of clergy burnout for anyone who tries it).  No, the task of those in ministry in the 21st century is trying to bring everyone together into some sense of cohesion and mission when people are different (thanks be to God for that, by the way) and when people respond to change differently.  That along with facing the fact that the change, like that big wave, is coming.  In fact, in a sense it’s already here.

It’s a challenge, to be sure. But it’s also a wonderful opportunity and privilege, to stand there.  Change means that God is in the midst of doing some pretty amazing stuff. Here’s hoping that, wherever we are standing in the surf – right at the breaking point or a little further up shore – that we all eventually get swept up in the wave of God’s change together.

In other words, time to get our sea legs under us.

Upcoming Regional Gatherings! Are They On Your Calendar?

Interim Ministry at the Speed of Change
Scroll to top