Each month, we post a series of blogs around a common topic. This month, Rev. Michael McNamara is curating a series that will explore the theme of Christian contemplative practice, which has been central to the formation and development of Christianity. We will learn from writers exploring spirituality from both the secular and the religious, embracing the paradox within that — a paradox essential to contemplative practice itself. How can this Christian or secular tradition impact today’s church? We invite you to join the conversation on Facebook and Twitter.

The smell of cacao is hard to explain, but it strikes the nose with a pungent and earthy flavor. As I walk into the meditation space, I notice the candles, soft pillows, and loose fabric hanging from the ceiling, serving as a wall between the kitchen and seating area. Bodies are pushing their way in from the cold Leipzig air. They bend to take off their shoes. And then my nose is hit with a new smell of sweaty feet… got to love yogis.

As the group moves through the fabric and takes their seat, greetings are passed and warm embraces exchanged. We prepare for our cacao ceremony with Ian, a young New Englander who now lives in Berlin. He spent some time studying in the far east, discovering the monastic way of life, and now travels around teaching. He wears loose harem pants, a mala, and his fuzzy beard coils like a snake at the tip. His guru top knot completes the look. 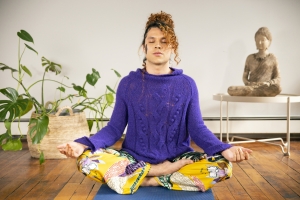 The cacao is scooped by ladle into our mugs brought from home and then passed around the circle to their proper owner. We get comfortable in our individual cushions and cover our lower extremities with blankets.

My eyes wander to those around the circle… a unit of bright-eyed, new-age followers. Hair is natural. Make-up is absent for the most part. Clothes are properly sourced. Shoes are worn and leathery. Feathered earrings, nose rings, and tattoos adorn the bodies.

As a teacher of yoga and meditation, I have become accustomed to these settings, but as a student of religion, I am hesitant… Not even a year prior, I had dropped out of a divinity program at one of the most prestigious seminaries. I had abandoned my hopes of becoming a pastor, and was still currently looking for how I should take my path alongside the church.

But how did I get here? To such a familiar setting… a small group if you will of like-minded individuals participating in an ancient tradition. Though the clothes and personas seemed different, the attention and following was so similar. Instead of a bible study or a prayer circle, these individuals wanted to chant and meditate. Instead of speaking in tongues of the Holy Spirit, they wanted to writhe with the force of Kali surging through their limbs. Instead of honoring the cup representing Christ’s blood shed for our sins, they wanted to honor the mighty healing powers of the cacao plant.

Yes, Christianity and Hinduism follow separate teachings and figures, but the thought kept creeping upon my psyche… How was this any different from what I had left behind?

I am torn by my love for religion. I relish in the ancient stories, the mysticism, and the questions of the universe. As a young Protestant, I had spiritual envy for the prayer mat of Islam, the yoga mat of Hinduism, and the altar of Catholicism. I craved a sacred space and a physical practice, something to stretch my body and mind. But I didn’t want to convert. I wanted to work with the community in which I was raised – to learn from my elders and pass on the faith. As the Church grew, I wanted to grow with it and shape it.

The modern world claims to be secular, to be science-based, to be open-minded… to have no time for religion. But generally, these are also the same people parading around with talk about crystals, energy-healing, and past-life regression? So why is it that those who criticize religion for being strict and limiting, have merely created their own form of ideological imprisonment?

We need to belong and we need to be part of a group of like-minded individuals that support and strengthen us, but when did we stop calling out what we know is crazy? When did we start failing to hold one another accountable – and to acknowledge when reality is being usurped.

In a time when we are more polarized than ever, when we cling to our groups – we cannot be afraid to challenge those closest to us. We have to continue to speak up and to ask questions. Humans have evolved and created narratives that shaped how we see the world. But we cannot forget that there have also been moments in history when those narratives have needed to die in order for something new to grow… for resurrection of life from death.

Kirsten Melone has always been interested in mind-body discoveries, from dancing as a child to practicing yoga in her 20s. Her hope is to better understand how to help individuals access their fullest potential as human beings. As a lover of stories, art, and nature, she seeks to embody the wisdom of ancient contemplative practices in an over-stimulated world. As a certified Yoga Teacher through Yoga Alliance, Kirsten makes herself available to anyone who is curious about going further into their practice or spiritual musings. She is currently working through a two-year certification program in Spiritual Companionship at the Shalem Institute of Washington, DC.

Bringing Contemplative Practices to the Congregation