I grew up in the Evangelical church and suppressed my being gay until my early thirties, when I had a very spiritual and cathartic moment that would change the course of my life forever. I was thirty-two when I came out as gay and Christian, fully affirming myself and LGBTQ+ inclusion in the church. 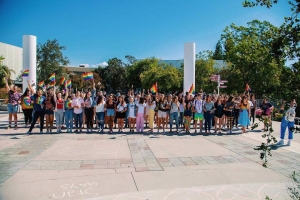 I have been passionate about Scripture since I was a child and never lost that passion, even while being ignored as a woman and marginalized as a member of the LGBTQ+ community. I became a member of the PC(USA) shortly after coming out, and decided to return to academics to achieve my Bachelor of Arts in Biblical Studies. I went to Biola University and led their underground LGBTQ+, non-school sanctioned affirming group, Biolans’ Equal Ground. We held several demonstrations, events, and protested on campus when a lecture on campus endorsed conversion therapy for LGBTQ+ folks as a way to “heal” from their “sinful identity.” While training in biblical studies, I was also involved in The Reformation Project, a Christian, intersectional non-profit which focuses heavily on the Bible, inclusion, and racial justice. I did an extensive leadership cohort training with them and worked as a faith advocate and activist for other nonprofits as well.

In 2016, I transferred to Azusa Pacific University to complete my Biblical Studies degree and helped consult APU’s underground LGBTQ+ movement, called “Haven.” I spent my senior year negotiating a controversial policy removal that previously banned “romantic same-sex relationships.” The policy was reinstated by the school’s Board of Trustees once they received public criticism and backlash from conservative constituents and donors. I am currently working on action to protect LGBTQ+ students at APU and holding Christian institutions accountable by not allowing them to further marginalize and “other” our community within Christian university spaces.

Brave Commons, the current organization I help lead, is a new organization structured to unify and converge all LGBTQ+ underground and overground student groups at Christian universities across the U.S. Our specialty is understanding the dynamics of specific school regions, institutional politics, and emboldening LGBTQ+ student group movements. We employ a horizontal model of leadership with three co-executive directors strategically located in critical regions of the U.S. with non-affirming Christian universities nearby. Each one of us is trained in biblical exegesis, hermeneutics, intersectionality, pastoral care, racial justice, and direct action organizing. Along with my colleagues, Michael Vasquez and Lauren Sotolongo, we are also members of the Latinx community.

Brave Commons seeks to provoke a movement of faith and justice within Christian institutional and faith community spaces that oppress LGBTQ+ folks and Queer People of Color. Our Sermoncast series is a movement of homiletical activism and resistance where we utilize the common lectionary to preach to those on the margins and on the peripheries. We grieve the trauma imposed on our community and we seek to restore it, build it up, ignite it, and invite our LGBTQ+ siblings to take their seats at God’s table as beloved children of God.

Erin is an M.Div student (class of 2021) at San Francisco Theological Seminary. You can learn more about her and her brave initiatives at bravecommons.org. This article was originally published in the Winter 2018 edition of SFTS’s Chimes Magazine.

Ministry in the Fields

Worship Outside the Box
Scroll to top