What if our foundational story started with a garden full of flourishing trees and abundant life? Then suppose God formed a human from the soil of that blessed Earth and called that human ‘good.’ Imagine that this story was then shaped, molded and passed from mouth to ear around the fires of people wandering in a rocky desert wilderness, a people guided by a pillar of fire and a pillar of smoke. Then after struggles and wars, imagine that God came and walked the dust of that same Earth, touching human beings, loving them and making them whole. Imagine if this God on Earth was recognized in a meal of bread and wine. In fact this God-with-us was so powerful that we were scared and killed him. But God continued to love and sent a spirit that rushed through the air into the bodies of everyday people, filling us with God’s presence, God’s prophetic voice, song and courage. 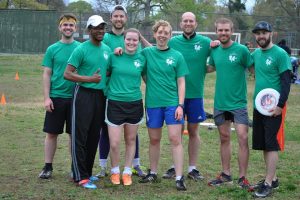 For me, this story means falling in love with the stuff of this world. It means playing Frisbee on Friday afternoons with friends, feeling my muscles contract and release, sweat covering my face. It means going on runs through the woods, bowing my head to the ground in prayer, even doing a ridiculous dance in the sun before finishing my final paper. It means sobbing when I hear of the havoc humans are wreaking on creation. It also means gathering together with other people for a meal in which we remember our story, not only in words but also with our bodies in chewy bread and the sharp taste of wine.

Finally it means letting myself be changed by the stuff of this world. A mentor of mine once told me to sit down and hold a drinking glass in my hand. He told me to just sit and get to know its way of being in the world. So I went home and sat in a chair and picked up a glass. It felt ridiculous at first. It was ridiculous. Words kept distracting me, but I let go of them and kept returning to this object that started feeling stranger and more enigmatic the longer I held it. I can’t say I learned what it’s like to be a drinking glass. But I did learn the beginnings of a way of being in the world. I began to exist as a peer, as one among an infinity of other things with their own God-given ways of being in the world, each with their own power and grace. God is the source of all creation and so, all creation speaks of God. For me, listening to God means stopping to feel the tension my body is holding. It means letting the light around me change me. It means when I sing, feeling the vibrations fill my whole body. Light, sound and sensation are sent as our teachers as much as a book or a professor.

Churches are searching for new stories. We make sense of our world through language and story. But so often we forget to return again and again to the ground, the womb which gave rise to those stories in the first place. God delighted in creating and inhabiting the fabric of this world, in light and sound and bodies. I wonder what it would look like to learn, not as a mind seeking dominion and control over material things, but as a lover, seeking only to listen, understand and cultivate that which is beloved in the world.

Madeleine Benishek is from Minneapolis and is now a third year MDiv. student at Princeton Theological Seminary.

What Are We Praying For?
Scroll to top