In the video depicting a white police officer, Derek Chauvin, slamming his knee onto George Floyd’s neck for 9 minutes, there is another officer prominently featured in a “supporting” role.

Officer Tou Thao, who had previously been the subject of six complaints with no discipline including an excessive force lawsuit resulting in a $25,000 city payout, casually guarded the scene like a watchman, projecting toughness and carelessness for a situation that warranted neither. He snarked “don’t do drugs, kids” to onlookers pleading for a man crying out “I can’t breathe.” He yelled and “kept order” while people, including an off-duty official, tried to reason with him to do something. Anything. 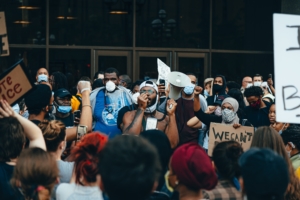 Photo by Josh Hild via Unsplash

Tou Thao, an Asian American from the Hmong community, just stood there, keeping his post, while a white cop literally was shoving the force of the state onto a black man. As a symbol of Asian Americans complicit in taking advantage of white supremacy as a sidekick, like the Asian man in the auction in Get Out, it was almost too on the nose.

Like many Asian Americans growing up, I had my own “go back to your country” moment. Specifically, I remember as a child walking in on my father recounting how someone told him to “go back to your third world country” to him. This is one of the ways white supremacy in American forever foreign-izes Asian Americans.  And like many other Asian Americans, I as a child, without understanding fully the larger systemic structures at play, internalized this otherness which led to self-hate. Filipinx hip-hop artist Ruby Ibarra raps about forever feeling like she’s in the “background,” her mom telling her to not stay in the sun too long to get tan. Last Jedi-star Kelly Marie Tran recounts how the vicious racist attacks she experienced online reinforced what she always felt about herself growing up.

“The same society that taught some people they were heroes, saviors, inheritors of the Manifest Destiny ideal, taught me I existed only in the background of their stories, doing their nails, diagnosing their illnesses, supporting their love interests — and perhaps the most damaging — waiting for them to rescue me,” she said. “And for a long time, I believed them.”

The Asian American experience has a lot of pain and struggle, and we rightly should call out white supremacy’s systemic racism against Asians. But there’s another uglier side to our collective experience.

I remember growing up in the Northeastern suburbs (important to note, we are more of a diaspora here, whereas in California there are larger populations that I suspect had many different experiences than mine). Many of us semi-kiddingly called ourselves coconuts – brown on the outside, white on the inside – or Twinkees – yellow on the outside, white on… you get the idea. I internalized as a child that the best way out of other-ness was to ally with and even become more “white.” If I performed enough acceptability to whiteness, then I would belong. Asian Americans whose accents were too thick and food tastes too smelly were labeled Fresh Off the Boat or FOBs  – this was to each other. I still remember my Lola – grandmother in Tagalog – staying with our family during my middle school years, and having this internalized rage at her, her accented exchange of the “P” sound for “F,” her lack of knowledge in basic American cultural milestones, her mere presence an embarrassment to friends who came over and to see that I was not fully like them. (Lola, God bless you in heaven, I hope you forgive me.)

I wish this were just the biographical story of one hurt but foolish child, but unfortunately there are aspects of this baked into parts of the modern Asian American story. It should be noted that late 19th/early 20th century Asian Americans had a much different experience. Just to highlight my own culture, events like mobs of white people rioting and hunting down Filipinos and burned down homes in the 1930 Watsonville riots and of course the mass murder and colonization of the Philippines led to explicit race-solidarity movements like Filipinx workers organized with Cesar Chavez and the United Farm Workers.

But in the last few decades, many Asian-Americans have embraced the “model minority” myth as their ticket to white acceptance. See, we’re the good minorities, we work hard, and now we’re successful! We earned our spot here!

Of course, none of this is an accident. The “model minority” myth was created by white America self-selecting highly skilled Asian immigrants as Cold War-era propaganda to squash calls for equality for black Americans – these minorities can do it, why can’t you? Even stereotypes like Asian men being sexually deficient were products of white men spreading false rumors after feeling threatened by Chinese and Filipino immigrant men connecting with white women – the same men whom America used to build its railroads and pick its fruit in the late 19th and early 20th century.

But whatever its origins, many of us have embraced white-adjacency as our ticket to acceptance, at the expense of solidarity with the struggles of other people of color. Asian-Americans have been prominent in movements such as stopping affirmative action in colleges and protesting high school test reform. An alarming amount of Asian-Americans rail against “illegal immigration” since they “did it the right way,” and while various polls conflict as to the amount of support Asian Americans supported Trump, Filipino-Americans in particular seem to be near the top of Asian-American groups that have a significant minority of them supporting the man who called Mexicans rapists and drug dealers.

Is it no wonder that other people of color question our commitment to justice? When Hot 97 radio host Ebro recently re-posted an Asian solidarity post form DJ Franzen, I scrolled as I saw responses such as “They always been subservient to white man, they don’t care about us,” “Asians identify as white now,” “most Asian groups subscribe to white supremacy, period,” and “I won’t hold my breath waiting on them to be allies.”

Now that we have been targeted with racism in this COVID-19 crisis, will we realize once and for all how futile it is thinking that standing guard for white supremacy and chasing white acceptance and “American-ness” will give us anything? In an article by Jennifer Lee and Monika Yadav, they said, “The president’s attribution of the coronavirus to China, and the virulent attacks against Asian Americans show how easily they can fall on “the wrong side” of America’s nativist fault line. Racial mobility is no guard against anti-Asian prejudice.”

I know there are many Asian-Americans and organizations organizing in their allyship for the black community, and perhaps my words serve just as much confessional as it is cry to action. And all non-Asian-American readers need to know that the Asian-American experience is one of the most diverse merely by the sheer size and number of Asian countries represented, and the prominence of relatively wealthy Asian-Americans in prominent professions such as doctors, accountants, and tech workers obscures the large amount of poverty in often refugee communities that make up a significant yet forgotten portion of the population.

But for every Asian-American in this country in this time, we are confronted with a stark choice. Will we pull up for black America and see the collective struggle of all people of color as our own, including accepting our relatively privileged place in it? Or will we just keep our post and guard white supremacy, hoping to lap up the crumbs of white acceptance? Will we just stand there? 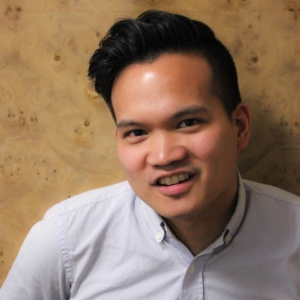 Reverend Chris Dela Cruz is the Associate Pastor of First Presbyterian Church in Jamaica, a diverse, immigrant Queens, NYC congregation with over 30+ nations represented. His role includes building a co-working space for young adult entrepreneurs, coordinating kids and family ministries, and helping in community organizing efforts. He has written for Next Church, Presbyterian Outlook, and other outlets. Prior to being an ordained pastor, he was a journalist for the Star-Ledger in New Jersey.

From My Neighborhood in Minneapolis
Scroll to top