The surprise election of Donald Trump exposed a social media truth: people who are intimidated into silence, or who don’t feel safe sharing their politics, won’t. They avoid tipping their hand, lie to pollsters and harden their opinions in response.

Arguing politics or theology on Facebook is always fraught with risks. Who will see me at my political boiling point, judge me for opinions that might outrage them? Will speaking out threaten my job? 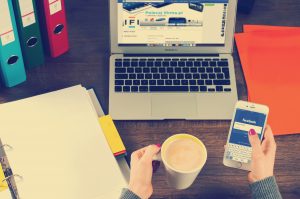 What about my friendships online and off? I meet and befriend people on Facebook I may have met through work, school, church or some other shared interest, because they lived on my street or just that our children played together on a sports team. Friends may come into your life for “a reason, for a season or for a lifetime,” as the poem says.

Faced with these risks, many people avoid such topics and engagement on social media. They hold their tongue and scroll, scroll, scroll. Others may comment upon a friend’s post, but avoid posting something political themselves. Very dramatic people may preemptively command anyone who would dare disagree with them to “JUST UNFRIEND ME NOW!”

And when is Facebook finally going to offer that “sarcasm font” that everyone seems to want?

I have carried on lengthy political debates over Facebook with all sorts of friends. And I have felt the silent sting of having been “de-friended” by some friends who must have concluded I was a temporary friend “for a reason,” as the poem says,

“Then, without any wrongdoing on your part or at an inconvenient time, this person will say or do something to bring the relationship to an end… Sometimes they act up and force you to take a stand. What we must realize is that our need has been met, our desire fulfilled; their work is done. The prayer you sent up has been answered and now it is time to move on.”

It’s sad to lose a friend this way, but the poem gives us license to risk it if we feel strongly enough about our beliefs. As long as I have conducted myself with dignity and respect for those who won’t agree with my position, I willingly take that risk when I hit that “reply” link.

I am fortunate to have some friends I always disagree with about politics, or who don’t share my religious faith. Their differences from me always weigh in my mind when I discuss politics, whether online or off. But online it’s so much harder, because you can’t hear their tone and conviction. You won’t detect the quaver in their voice. Even a gifted writer cannot convey through plain text why a certain perspective clings to them, and in these discussions logical argument may only go so far before the knives come out.

What has served me well in vigorous debates over the Internet is restraint in words. I learned painfully that with or without its own font, sarcasm rarely works and is interpreted as cruelty. That’s tough for a native New Yorker to say, since sarcasm is just part of conversation there. I’ve learned that, at best, sarcasm can be sparingly used on ideas. But never at people.

In our political discussions these days, we tend to listen only long enough to form a reply, not long enough to understand. Humility through understanding is essential before engaging in political discussions: You’re unlikely to change any minds, but you may learn something useful from your adversary that will humble you to why they feel as they do. And “feel” is critical.

Writing this article, I reached out to an “unfriend” to ask why he dropped me. We had a nice chat. He’s still a friend, just not on Facebook. He told me I had gotten sarcastic in an exchange long ago and he simply decided that he didn’t wish to engage me or my posts any more. Neither of us could even remember what the discussion was, of course. We remain “unfriends” on Facebook still. It’s a mutual parting. He taught me to hold back, to focus on issues not people, and to know when to let others have the last word.

There are many supporters of Hillary Clinton this week who are despairing not only of the election, but of their fellow Americans “out there” who could have turned on them so viciously.

But my larger lesson from apologizing to my “unfriend” was that when I do engage online to remember the stakes are higher than politics or moral stances. What’s at stake is civility, forgiveness, forbearance and community spirit. What’s at the finish line, when we re-learn how to value those stakes, is reconciliation.

Joe is a digital news and communications professional and occasional blogger at Christian Post, writing about Presbyterian church matters. He shares his home in Gainesville, Virginia with his wife, two sons and a brown dog.

Faith and Public Policy Ministry Group as a Means of Reconciliation