In July of last year I had a dream that I had received a call to serve a new church and that I had accepted that call sight unseen. When I arrived on my first day, I discovered that this church was, in fact, a farm. And I woke up.

As dreams go, this one was short on detail but strikingly vivid with its suggestion: a church on a farm… a farm as a church… farm church? 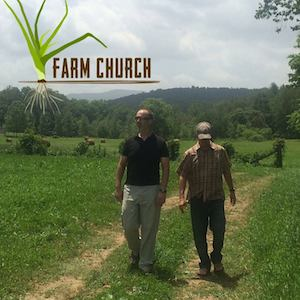 Lying there I began to wonder what a farm church would look like. I imagined a congregation gathering to worship, maybe in a barn or outside in an orchard. And then after worship, I thought, for Sunday school kids could take care of chickens… and harvest eggs… and maybe their families could deliver those eggs to a food pantry on the way home…

Ideas started racing through my mind: farm-to-food-pantry ministries, bluegrass worship music, an actual choir loft… But what really caught my attention was a thought I had about a family that had joined First Presbyterian Church of Racine, where I had been serving for the previous six years. On the Sunday they joined, they shared with me that they had been laughing at themselves earlier that morning—laughing because they were actually joining a Christian church.

Church participation wasn’t on their to-do list that year. It wasn’t even on their radar. But one thing led to another and the Holy Spirit got involved somehow and there they were, finding themselves strangely at home in our congregation, looking for ways to get involved, and, in a move that would have utterly shocked their 6-month-ago selves, asking about joining.

I thought about the mom and dad in that family. They fit the profile of those I often refer to as “spiritually hungry but institutionally suspicious.” Spiritually engaged, mindful, prayerful… Open to conversations about God and religion, and eager to integrate those conversations into life practice. But suspicious of the Church, its traditions, worship forms, and generally, its institutional weight. But there they were, deeply investing themselves in our congregation, and laughing at themselves because of it.

Still just half awake from my dream, I thought of that family and bet that if we had a Farm Church they would have come a lot sooner. This was all at 3:17 in the morning, and by 4:00 I bought the domain name, www.FarmChurch.Org.

Fast forward a year and a month and a few days. The “For Sale” sign is in the yard and I’m sitting on my living room couch surrounded by a forest of stacked moving boxes. Next stop: Farm Church. Sort of. The next stop is actually an urban apartment in Durham, NC where we’ll live while we invest in the community and work to discern a location in the area. I say “we” not just because my family is coming with me (bless them) but because one of my dearest friends in the world, Allen (a bona fide farmer who I called the day after my dream) and his family are coming too (seriously, bless them).

I don’t know where much of anything is in this house because it’s all packed. For a good while I was careful about labeling boxes as I went, but honestly, opening some of these is going to be like Christmas morning because I have no idea what’s inside. (Ooooo! A bottle of chipotle sauce. Honey, you shouldn’t have. Seriously, this is a box of linens. You shouldn’t have.)

The scene in front of me is emblematic of our lives at the moment—clearly changing, upended, in disarray, but purposely moving. And I’m excited about the dream, the chickens, the soil, compost, and crops. But perhaps what excites me most is the challenge to be and become church with people who, for all sorts of reasons, might call themselves spiritually hungry but institutionally suspicious—folks who find themselves in this postmodern, post-denominational, post-Christian age still wondering about God, still eager to wade into deep matters of Spirit, still willing to dream about their lives and the world around them in light of Christ’s call.

The Landscape of Urban Farming: I’ve Got a Garden Coach!
Scroll to top