In the Gospel of John, Jesus said, “I’ve told you all this so that trusting me, you will be unshakable and assured, deeply at peace. In this godless world you will continue to experience difficulties. But take heart! I’ve conquered the world.” I’d like to take a bit of liberty and translate the last part of that verse this way: “In ministry, you will face questioning and be criticized, but take heart! I’m not afraid of the questions and I have overcome the criticism.”

Face it: in ministry there will be criticism. We will be criticized. Especially when we’re at the forefront of what God is doing “next” in the church. Realizing that does not, however, make accepting criticism or having people question our ministry, motives and work. 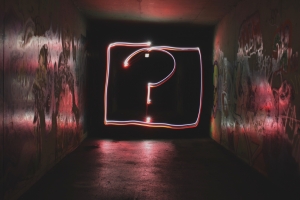 More than 20 years ago, when I first started ministry, I had a question that still haunts me. “When are you going to get a real job?” That question, from a family member, stunned me. Was my work and effort and ministry as a youth pastor not worthy of being considered a “real job?” Thankfully, the question forced me to consider what I was doing at the time and even today, the question is cause for reflection.

For 6 years, I served a church on the East Coast. The congregation decided it was interested in being more involved in the community. At least, they said they wanted to be more involved in the community. The church hired an “evangelism coach” to help the pastoral staff and congregation understand what it would take to be truly outwardly focused. But, like most churches, what they really wanted was for the community to come into their doors, and they wanted them to enter on their terms.

As the leadership team began to chart a new course and unveil it to the congregation, tension began to rise. Pointed questions began to filter in. Questions such as:

“When are these new people you are working with going to sit next to me in church?”
“We are paying your salary; you should be spending more time with us instead of them.”
“When are they going to be contributing members to this church?”

I had a deep love for the congregation and through the years we had walked through the complexity of life together. But their criticism of the ministry God had called us to became a real challenge for me. I did not know how to deal with criticism from people that I respected, people I loved and people with whom I had forged great relationships. Yet, in the midst of the struggle, I knew that we were part of something greater—something far beyond ourselves and the four walls of that “church.” The endless criticism and constant questioning wore me down. It caused me to question if God had actually called me to that place and that ministry. I internalized the criticism and it changed me. It caused me to go down dark holes of despair and I found myself being passive aggressive. I became someone I did not want to be.

Recently, I was watching Brene Brown’s Netflix special and she raised up a quote from Theodore Roosevelt that gets to the heart of the matter:

“It is not the critic who counts; not the man who points out how the strong man stumbles, or where the doer of deeds could have done them better. The credit belongs to the man who is actually in the arena, whose face is marred by dust and sweat and blood, who strives valiantly; who errs and comes short again and again; because there is not effort without error and shortcomings; but who does actually strive to do the deed; who knows the great enthusiasm, the great devotion, who spends himself in a worthy cause, who at the best knows in the end the triumph of high achievement and who at the worst, if he fails, at least he fails while daring greatly. So that his place shall never be with those cold and timid souls who know neither victory nor defeat.”

Of course, hindsight is 20/20. I look back and reflect on those 6 years of ministry with a clearer understanding. Today, I wonder if those who offered critiques of my ministry had an adequate understanding of what we were doing. I wonder if I could I have helped them have eyes to see and hears to hear. Perhaps I failed to make space for them in the arena.

As we engage in ministry, as we discern what’s next for the church and as we walk into that vision, we will be criticized and there will be questions. Here’s my wisdom on the matter after 20 years in ministry. Be confident in who God has called you to be and steadfast in the work before you. Don’t fear the questions or the criticism and do not let those who criticize chip away at who you are. Rather, invite them into the arena; make space for them to walk alongside you and invite them into the thick of the discerning process.

Dare greatly as we participate in God’s mission on earth to journey into what is “next” for the church. And remember the words of the one we follow, “In this world as you answer God’s call on your life, you will face questioning and be criticized, but take heart! I’m not afraid of the questions and I have overcome the criticism.”

Rev. Sean Chow lives with his family in the San Francisco area and is the Western region associate for 1001 New Worshiping Communities.

Loving the Earth Boldly as People of Faith
Scroll to top