Day one, in processing our very first activity together, those of us gathered for the week in Baltimore were told the truth: If we were serious about making change we would have to have power, and if we wanted power then we would have to “unlearn all of our clergy stuff.” That statement has been agitating something in me ever since. Somehow, in the midst of our best attempts as leaders to challenge the powers and principalities, we have inherently set up a dynamic whereby we’ve locked ourselves out of claiming power. We are supposed to confront power, aren’t we? Name it, shame it, reframe it, but certainly don’t claim it. So how can we claim what we also condemn? 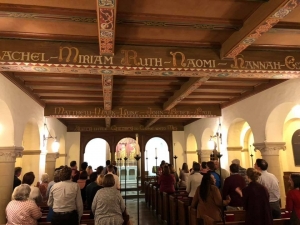 We begin with who God is. We know, based on Genesis 1:26 and John 1:1-2 (among many others), that God within Godself is in relationship. Father, Son and Holy Spirit; Mother-Sophia, Jesus-Sophia, and Spirit-Sophia, as Elizabeth Johnson points out: “The mutual coinherence, the dancing around together of Spirit, Wisdom, and Mother…this defines who God is as God. There is no divine nature as a fourth thing that grounds divine unity in difference apart from relationality. Rather, being in communion constitutes God’s very essence.”[1]

Further, we read throughout the biblical stories how God is not only in relationship within Godself but yearns for, makes way for, initiates again and again relationship with humanity and indeed with all creation. Though certainly God is capable on God’s own, God consistently transforms by raising up leaders who then raise up communities of power: God in Moses and Aaron with the Israelites, Jesus with his disciples and masses who were fed on the hillside, the Holy Spirit with Lydia who grew the church in Philippi, to name just a few. We learn, in knowing who God is and how God works, that power is generated through and used in relationship with others.

Of course we all know that relationship can be manipulated to generate power that wields the tools of violence and fear. Howard Thurman shares the story of a young German woman who escaped from the Nazis. Talking to Thurman, she describes just how thoroughly Adolf Hitler manipulated the isolation felt by German youth. “It is true,” Thurman reflects, “that in the hands of a man like Hitler, power is exploited and turned to ends which make for havoc and misery.”[2] Hitler convinced them that he was the only one who could love them, ensure their belonging and their safety. Of course, there are any number of stories we can tell of power built by manipulation and fear in relationship to others wreaking havoc on our communities.

God isn’t about any of that mess, never was and never will be. God cultivates relational power. Thurman contrasts the story of Nazi youth, pointing to how Jesus spoke of God’s care for humanity and all creation as that of a loving parent. God creates the conditions for belonging, and trust in belonging empowers both the individual and the community as a whole towards acts of transformation. “A [person’s] conviction that [they are] God’s child automatically tends to shift the basis of [their] relationship with all [their] fellows.”[3] [brackets are mine].

This is the same belonging that we preach and enact in the church through the sacrament of baptism. God does not manipulate us into it, but rather makes it the ground of our being. Thereby, if I am a child of God then you are a child of God. We, together, belong to God — we have a common identity and a common purpose. That common purpose is set out explicitly in Scripture and in the person of Jesus Christ — love God and love neighbor enough that we act upon these things now, not later.

As church and community leaders we can (I think we have to) both confront and claim power for the sake of the people we love and minister with and for the sake of any hope in real transformation of our communities. Confront that which is manipulative and abusive, and at the same time claim power that is more accurate to God who is the one who got us into this ministry-game in the first place.

Sarah Cooper Searight serves as Associate Pastor at Swarthmore Presbyterian Church in Swarthmore, PA. She delights in both her ministry life and her home life where she is partner to Bill (also PCUSA clergy) and mom to Maggie and Ella (PKs extraordinaire), and every so often in the midst of these two she gets in a good run.

The Ability to Act