Each month we ask a different person from the NEXT Church community to assemble a series of posts around a particular theme. This month, Lee Hinson-Hasty is curating a conversation around theological education. Have ideas or reflections to share? Offer your thoughts in comments, on our Facebook page, or contact us here. 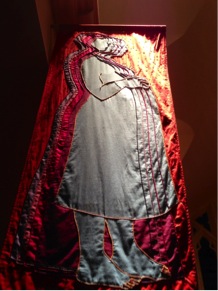 Advent is a paradox between what has come before and what, by God, is becoming now. An opening to the Christmas cycle of the Christian Year, Advent calls the Church to look back and look forward; to remember, reflect, and live in expectation and hope.

A decade ago an Advent banner of the expecting mothers that hangs at Highland Presbyterian Church in Louisville, Kentucky drew me in as soon as I entered the sanctuary.  Elizabeth and I were visiting Louisville for the holidays and it enlivened my imagination that day and still does.  The banner was created by Ann-Stewart Anderson and was inspired, I am told, by the five mothers cited in the genealogy that begins the Gospel according to Matthew.  The mothers (Tamar, Rehab, Ruth, Bathsheba, and Mary) are depicted as overlapping and supporting one another visually and symbolically. Each from their own biblical circumstance and story, in a way, foreshadows the others.  Yesterday also marked the beginning of a new Lectionary Year (A), that features Matthew’s Gospel.  All of this makes me wonder:

What is being foreshadowed this Advent?  What will be born?  Specifically, what is coming and becoming, being born and foreshadowed in theological education today?

Join in this Advent feast throughout December of thoughtful writers, church and academy leaders, and genuinely gifted group of ecumenical friends in the faith from the U.S. and Canada who will reflect with me on this last question about theological education from where they sit, from their own circumstance. Some know the others, but many do not. Each is writing without having heard the other respond to the question. Each looks back and each looks forward. Most of all, each lives in expectation and hope.

Here’s who you can look forward to reading as they each bring their own recipe to the Advent table to share:

I look forward to hearing from you through your comments as we join at this Advent table, make new friends, become captivated by what God is midwifing into what’s next in theological education, and find ways to overlap and support our mutual concerns in the circumstances where we each follow God’s call.

Lee Hinson-Hasty is coordinator for Theological Education and Seminary Relations and a lead staff person for the Committee on Theological Education of the Presbyterian Church (USA) and the Presbyterian Mission Agency. Ordained in 1995, he has served as a campus minister and pastor in Virginia and as director of church relations at St. Andrews Presbyterian College in North Carolina.  Hinson-Hasty actively engages in dialogue, study and initiatives that foster relationships and leadership development in the church and academy including on his the blog, “A More Expansive View: Encounters with Presbyterians and our Seminaries.”  A graduate of Wake Forest University (BA-History), Louisville Seminary (MDiv), and McCormick Theological Seminary (DMin), Hinson-Hasty is interested in leadership in a multicultural world, serves as Vice Chair of the Fund for Theological Education, is a member of Lectio Jubilate, and is married to the Rev. Dr. Elizabeth Hinson-Hasty.  Elizabeth and Lee are parents of Garrison (13), Emme (7), and a four month old puppy, Basci.

Are You In?
Scroll to top