Background
I am currently in my 17th year as the Pastor of a medium size, predominantly white, conservative church located thirty-five miles west of Washington DC. The changing cultural landscape in recent years has left many of our folks in a somewhat confused and anxious place, often feeling disconnected from the larger denomination.

In 2012 our Session voted unanimously to affiliate with the Fellowship of Presbyterians (now The Fellowship Community). Overall, this affiliation has been a positive experience for our church and has (mostly) helped folks to calm down. 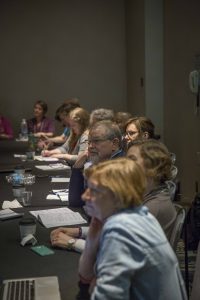 With some training in Bowen family systems theory, I have been trying to offer non-anxious and self-differentiated leadership. One critical strategy for keeping myself calm has been an intentional effort in the past several years to reach across the theological aisle at our presbytery in an attempt to build relational bridges and mutual understanding.

A Calculated Risk
Like many, I followed the June 2014 General Assembly with keen interest. The night the marriage overtures passed I received an email from Jeff Krehbiel, a colleague from the ‘other side of the aisle’ whom I had begun to know through some shared presbytery work. Jeff acknowledged, with a gifted pastor’s touch, that the same news being celebrated at his church was likely to be a source of disappointment in our church. He was right.

Jeff offered himself in support of me in any way he could. In reply, I took a calculated risk and invited Jeff to address our Session and Deacons on how he makes the case from Scripture for same-sex marriage. This experience began a rich conversation and collegial relationship that grew as Jeff and I committed to facilitating an on-going conversation within our presbytery. We simply called this effort, “Can We Talk?” Jeff’s untimely death earlier this year has been a huge loss for so many, including myself, as we had begun to extend this conversation beyond our own presbytery, including an Ignite presentation and workshop at the 2016 NEXT Church National Gathering in Atlanta.

Beyond Either / Or
It’s no secret that the growing polarization in our culture tends to push us towards a binary paradigm that views things in terms of ‘us/them,’ ‘conservative/progressive,’ or ‘for/against.’ One of my greatest challenges has been to find a way beyond the ‘either/or’ dilemma that many denominational conservatives like myself believe we are faced with: either seek dismissal from the PCUSA, or stay and face membership defections and leadership battles.

Not surprisingly, I am finding few examples and fewer colleagues with the appetite for doing the relational work necessary to move beyond this ‘either/or’ mentality. For some it may be a lack of vision, imagination, or desire. For others it may be asking too much to abandon deeply embedded patterns of binary thinking.

I have also found a real tension lingering at the edges of this work: Can we be in meaningful relationship across the aisle without also being seen as a traitor, of sorts, to our own convictional community? Or from another angle, will our convictions be an honest stumbling block to others’ living out their own theological convictions?

Quite frankly, many times I have wondered if this is all a fool’s errand.

A Modest Attempt
I believe the implications for this work are profound, not only for the health of our churches, but also as a witness for Jesus Christ in our polarized and fragmenting culture. I have been greatly encouraged by the warmth and receptivity by the NEXT Church community and a pilot coaching cohort experience following the 2017 National Gathering in Kansas City.

Is respectful and robust theological conversation about issues that divide possible? I think so. Could it ever be more than conversation? I hope so. But unless we first learn to sit and talk, it’s going to be virtually impossible to see ourselves as ministry partners in any meaningful way.
As I have continued to ponder and pray on all this, I believe the place to begin is with some kind of simple covenant that I would quietly commit to in my own life. I think it would be a covenant that commits to live toward unity with other Christians, that acknowledges the ‘log in my own eye,’ that honors the intentions of others as noble and just, and that respects the convictions of others even when they stand apart from my own convictions.

In short, I find myself wanting to make a modest attempt to be part of the solution, rather than part of the problem with our denomination and our world. And I would be honored to have others join me.

Don Meeks is the senior pastor of Greenwich Presbyterian Church in Northern Virginia. He is active in the Fellowship Community within National Capital Presbytery.  His vision for ministry is to invite people to experience and express Christ-likeness in all of life. He is an avid golfer, psalmic intercessor and songwriter.

We Want Things to Be Different

The Changing Landscape of Youth Ministry
Scroll to top