Each month, we post a series of blogs around a common topic. This month, Laura Cheifetz is curating a series on leadership development. These blog posts are by people who have been developed as leaders and who, in turn, develop leaders. They are insightful and focused. They offer lessons. What does leadership development look like in your own context? What could it be? We invite you to join the conversation on Facebook and Twitter!

What does leadership development in the church look like to me?

In the fall of 2001, a couple of pastor-mentor-friends convinced me I should work for the Calvin Center just outside of Atlanta, GA. I liked kids and I loved being outside. I was also going through a rough patch with my faith and just happened to be looking for a job while going to college. I needed a paycheck, so I signed up. Looking back now, I realize that at no point would anyone ever have been able to explain to me the 9+ years of leadership development that I would undergo and that would transform how I see the world and interact with God’s creation. I’ve tried really hard to carry these skills with me throughout my ministry since and use them to inform my decision making. 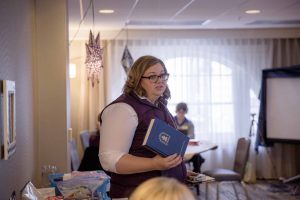 Here’s what I’ve learned: you can’t have good leadership if you aren’t someone who is helping to develop new leaders. Constantly. It’s part of God’s big hamster wheel that we should all find ourselves on. I realized I was running on that wheel after becoming an associate camp director and eventually a solo director where I was hiring college students and helping to create an atmosphere of nurturing new leaders. Good leadership and leadership development keeps going. You can’t just hone your own leadership abilities and be a true leader without being able to share with and impart that leadership onto others because that’s not how the gospel would do it.

I know it’s cliché, but in Matthew 28 we get our fundamental instructions for leadership development: to go and make disciples. When Jesus tells his followers to make disciples, it’s not only to make the world believe, but to believe and act on that belief. Which means, if we are to make disciples, then we’re meant to make active disciples who in turn go on to make more active disciples and so on. We are meant to make leaders who go on to make other leaders and so on. We are meant to keep God’s hamster wheel spinning and we should all be on it in some shape, form or fashion.

Over the years, the idea of leadership development has become something of a hot topic in the church. When I attend conferences or large gatherings, I often hear of special leadership events that a particular event or group is hosting, most often it’s an invite-only event. If your invite-only event is one that is intentional about bringing to the table people who have typically been left in the margins when it comes to leadership, then great. But let’s be honest with ourselves. Most of the time, we see the same groups or individuals at these events and we see the same people leading them. It’s frustrating and its exclusive.

Sure, some really good leadership development is done hosting intentional workshops for a hand-picked, select group of people. But the best leadership development happens when we figure out how to embrace God’s hamster wheel and start developing our leaders (aka disciples) who will bring others onto the wheel, not just the few deemed worthy or because they know the right person with some sway. I’m talking moving beyond the pulpit and chancels and moving into the pews and out into the streets.

Here’s the secret that we don’t want to talk about when it comes to leadership development in the church: like so many other parts of our world, you have to have a foot in the door to be a part of leadership and to get that development. And to get your foot in the door often requires an access to privilege and power that, let’s be honest, we don’t often like to share or give up. We’ve essentially separated making active disciples and developing leaders. And we wonder why the church is shrinking?

I had privilege that helped get me in the doors I needed to walk through to get good leadership development. I wasn’t looking to develop my leadership skills, but I did because of others. I was a young white woman from the suburbs, I had good people looking out for me, and my boss (who turned out to be a close friend for life) was one heck of a mentor who was never afraid to call me out when I did something wrong, tell me no when I’d always heard yes, and refuse to coddle me when I failed and acted immature about it. The leadership development I got from my time at the Calvin Center didn’t just help to create a leader in the church, it helped to create an active disciple. It did that for me and so many others because they weren’t interested in being selective, they were interested in developing each person who walked through those cabin doors because they were in the business of keeping that hamster wheel running and making active disciples to run it.

My leadership development came, in many parts, because of my own privilege. Sure, I was smart, likeable, and had a lot of energy for life and God’s church, I still do. But, there were people who were able to help place me in a position where I could blossom. Which is why the skills I developed in leadership are at the core of who I am, because I can’t take any of it for granted. I was introduced to people who helped shape who I am and my abilities, and I sincerely hope that we can change that model from getting leadership development for those with privilege or those with access, to making sure it’s available to all God’s people, especially the ones with little to no access.

We have to be in the business of making active disciples of everyone, not just the select. Then we’ll be in the business of leadership development that will keep that hamster wheel spinning. It won’t just affect the church, but it will affect the world. The church should be at the forefront of leadership development, it should be at the core of who we are. Which means it can’t be exclusive but intentionally open to everyone. Change the exclusive invites from a “+1” to a “bring all your friends and some random folks as well with you.” Leadership development shouldn’t be for the ones that those in places of power deem worthy, but for those whom God has deemed worthy.

Shelley Donaldson is a candidate for ordained ministry in the PCUSA. She works in Chicago at Fourth Presbyterian Church working with youth and leading missions to Cuba. She is a contributing story writer for WJK’s new book Growing in God’s Love: A Story Bible, as well as the Youth Cartel’s 4 Views on Pastoring LGBTQ Teenagers. She is also a founding member of Creation Lab. You can find her work on her blog, The Travelling Theologian: Traveling with 2 L’s Because I Can.

Workshop Materials: Intergenerational Ministry: Why and How
Scroll to top