It has been my experience that resolutions occurring at the national level of the church do not trickle down and do not have tangible impact at the local level. Despite the resolution’s merit in naming the diminution of black Presbyterian congregations as a significant problem, it does virtually nothing to stem the tide. Not to mention, it fails to connect to similar efforts of previous assemblies: Freedom Rising Initiative of 2016, black church growth strategies of 2012 and earlier, and the New Wineskins papers of the mid 1990’s. 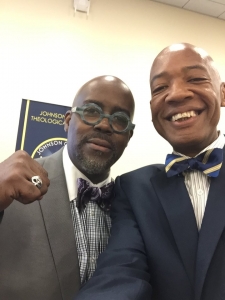 My 30 years as a Presbyterian has in many ways been defined by voices who have consistently named this problem. Yet, denominationally, the problem has only gotten worse. If we’ve known this for 30-plus years, and conventional processes haven’t addressed the problem in all this time, how much longer are we gonna content ourselves with doing the same thing over and over again! This is mind-boggling to me and personally I have no time or energy to devote to this insanity any more.

Also, this resolution assumes that the future of black Presbyterianism is inextricably tied to the preservation of its roughly 400 congregations. I don’t accept that. For sure, these congregations have an important legacy and rich tradition, but history suggests that the relationship between African-Americans and the Presbyterian Church is much bigger than our 400 extant churches, much more complex, and much richer. I believe the same is true of our future.

And here’s a challenge!

Maybe the next frontier for NEXT Church is to use the learnings of the last eight years as a foundation for planting some new churches. Black ones. Brown ones. White ones. Red ones. Blue ones. Mixed up ones.

Paul Roberts is is president of Johnson C. Smith Theological Seminary in Atlanta, GA, a position he has held since 2010. He is a native of Stamford, CT; however, he grew up in Bradenton, FL, which he considers his home. Paul graduated from Princeton University in 1985 with a Bachelor of Arts degree in Architecture and African American Studies. Prior to his career in ministry, Paul worked in advertising in New York City. He later received the Master of Divinity degree with a concentration in New Testament Studies from Johnson C. Smith Seminary.

In Search of Sabbath

The Church that is Becoming
Scroll to top