It was high up in the glass-encased office of the CEO of one of Baltimore’s large corporate players that my mind started drifting to stewardship.  It was an odd time to be thinking about stewardship.  The Baptist bishop, the Catholic priest, the city school teacher, the organizer and I were in this office to find out whether this CEO was willing to exercise leadership among his peers to support a campaign to rebuild Baltimore’s City School facilities.  This would be the true test of whether his words about young people were just words, or the stuff of true commitment. 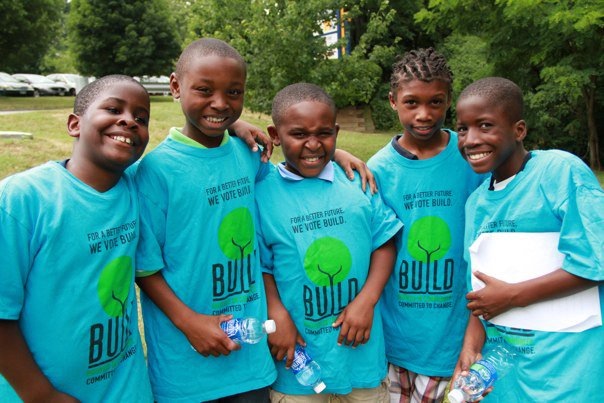 from the BUILD (Baltimoreans United in Leadership Development) website

We laid out the vision – political leaders, corporate leaders, religious leaders standing alongside teachers and young people calling on the MD General Assembly to change existing revenues to make it possible to leverage $500 million dollars this year toward the $2 billion need.  This, we said, was our “kairos moment.”  The CEO stopped to write this down – “How do you spell that word?” he wanted to know.  He asked a few questions then we moved to commitment – Would he stand with us in calling on the corporate community?  Yes, he would.  Would he call on other corporate leaders to use their leadership to support the legislation?  Yes, he would.  “This is what’s best for our kids,” he said.  And it was true.

But I was thinking about stewardship.  Like a lot of pastors, I never really received any training in stewardship other than the theology behind it, roughly summarized as this: because God has redeemed us in Jesus Christ, we respond out of gratitude.  Stewardship naturally grew out of this theological training.  When stewardship season rolled around, I preached some stewardship sermons, and people would, presumably, give out of their gratitude.  The first several years, the budget went up by a few percentage points.  Not bad, but not inspiring either.  So I did what any theologically trained pastor would do – I improved my message.  I labored over the sermons, and preached some really good.  I waited expectantly, but the budget numbers didn’t look all that different from the previous year.

Desperate, I turned to our lead organizer, Rob English, for help.  He diagnosed my problem immediately.  “You know what your problem is,” Rob said to me not waiting for me to give him permission to speak, “you preach these sermons and get these people all worked up, but you haven’t given them anywhere to go.  You want them to give money for the ministry?  Then you have to ask them for it out of the relationships that you have.”  “But I shouldn’t have to,” I protested.  “I mean, according to Presbyterian polity, it’s not really my job.”  He shook his head in disappointment.  I was a difficult case.  “I know what you’re going to say,” I said, “I’m living in the world as it should be instead of the world as is.”  His face brightened.  Maybe I was going to get this.

The next campaign, I met with about 20 families and asked them directly for a specific amount connected to a specific need.  Surprisingly, not only did 99% of the people with whom I met seem to enjoy talking with me about the church and all the exciting plans for the future, I learned things I had never learned about them before; stories about important people in their lives who had instilled a value of generosity, or why the church was so important to them.  In my first campaign, despite my ineptitude, I helped raise six figures for a capital-style campaign in our then 250 member church.

But here in the office of the CEO, I realized where I had failed in that initial campaign.  Rather than cultivating leaders to share the burden of the work, I had taken a lot of it on myself.  Not only had I generated a lot of work for myself, I had deprived others the opportunity of developing relationships, and deepening their own leadership.  My instincts had been partially right– my job wasn’t to raise money for the church.  My job was to help raise leaders for the church.  Just as we were calling on this CEO to call on his friends to commit to God’s work of nurturing the children of Baltimore, I needed to be developing leaders in my congregation to call on their friends to commit to God’s work in and through the church.

The next year, I identified people in the congregation who knew something about inspiring generosity in others – the development director for a local school, the grassroots campaign masterminds who unseated one of Baltimore’s machine politicians through their face to face work, a membership director for a local club, a jovial philanthropist, and one of my skeptics who, nonetheless is listened to by many when she speaks.  I met with each of them individually and asked them to serve, teaching us all in the process about how to connect the joy that people feel in our mission with their generosity to the church.

It took me 6 years of broad-based organizing experience before I came to see that organizing is not about politics – it’s about relationships that can be organized to build all sorts of amazing, grace-filled agendas for God’s work in the world.  Raising $500 million dollars for justice in the schools isn’t all that different than raising a money for a church’s mission.  Call it a kairos moment.

Andrew Foster Connors is senior pastor of Brown Memorial Park Avenue Presbyterian Church in Baltimore, MD where he also serves as clergy co-chair of BUILD, an affiliate of the Industrial Areas Foundation, the oldest and largest community organizing network in country.

Back to What’s Next …