Each month, we post a series of blogs around a common topic. This month, Jan Nolting Carter is curating a mosaic of perspectives on the art of transitional ministry. How do we work with people and systems in the midst of change? What does transitional ministry look like inside and outside of the church? We invite you to join the conversation on Facebook and Twitter!

“Where are you from?”

Simple question, right? Not for me. My dad was career military, so the scenery changed for us every year or two until I was nearly in middle school.

Every time we landed in a new place, the family would pile into the Chevy Caprice and we’d orient ourselves. Mom and Dad would find the commissary, the schools, the playground, the base chapel. Tucked in the front seat between my parents, I learned early how to read a map.

The more pressing question became, “Where are you at?” 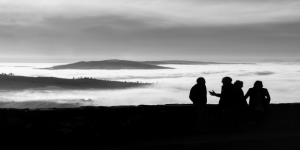 The world around me was constantly in transition. Surviving new schools, neighborhoods, and faith communities meant learning how to navigate the new culture. It meant figuring out how to bring who I was to what was already there. As a friend put it, I had to become “productively nosy in other people’s business” – paying attention to where I and the people around me were “at.”

I learned quickly that people swim in their surrounding culture as fish swim in water – often with a similar lack of awareness. As the new person, it was all pretty obvious to me. Sometimes it was hard to dip a toe in, especially when some of it just seemed so dumb. Why couldn’t these people just change?

Writer David Foster Wallace observed, “The most obvious and important realities are often the ones that are hardest to see and talk about.” But telling people to change what they couldn’t necessarily see was not just tone-deaf – it was doomed.

Part of the “productively nosiness” I exercised was the art of holy listening.  Learning how to listen to a context and its people – whether a neighborhood, congregation, or nonprofit – is one of the most crucial practices a ministry professional can engage. This is especially true in times of great transition, when the default and the familiar look awfully comforting.

What does holy listening look like? It means being present – really present – to the other and their reality. When I was a new high school teacher, barely older than my students, a sage mentor reminded me that sometimes, perception is reality. It shapes how people see the world around them and scripts how they respond to it. Being present helps tune our antennae to the world as others understand and react to it, not as we think it should be.

This isn’t just good interpersonal advice – it’s a deeply theological stance. It means taking the incarnation seriously and ministering accordingly. One of my wisest colleagues only ever asked two questions; “Where is God already at work in the world? And how can we be a part of it?” We don’t bring God anywhere; God is already there.

Being present is a practice that allows us to get past the white noise of our own expectations and distractions. It allows us to recognize the God of revelation who prefers showing up in surprising packages – whispers, babies, perhaps even that super annoying congregant who never likes your homilies. It helps us remember that the Word became flesh and moved into the neighborhood.

Holy listening requires a “hermeneutic of curiosity.” Curiosity is productive nosiness that means willingness to learn about ourselves and others in a way that might change our own default settings.

I recently spoke with a pastor lamenting the slow death of his tiny rural congregation. Worship attracted just 30 people on a Sunday. But every Wednesday, a hundred hungry elders lined up for the senior luncheon two hours before the doors opened!

Where was church really happening in that community?

Holy listening makes for good pastoral care, too. When my daughter was teeny, she hated talking to me while I multitasked. She would put a firm hand on each of my cheeks and turn my face towards hers. Nothing less would do. The Chinese character for listening includes the roots for eyes, ears, heart, you, and undivided attention…. Not unlike the presence of a God who chose full involvement in humanity.

Holy listening is crucial for discernment. One hundred percent of us have been called to participate in God’s vision for the flourishing of all creation. Holy listening helps us recognize where that work is happening and how to be a part of it (or at least how to get out of the way!). It also helps us see others as partners in this good work, not as things to manage or problems to solve.

Holy listening is hard. It’s even harder when transition and change crank up the anxiety to eleven. But it’s absolutely necessary, especially if we minister in the name of the Word made flesh. And it’s the only way to answer the question of where we are at – and where we are called to be.

Helen Blier is the Director of Continuing Education at Pittsburgh Theological Seminary. She considers herself a “roaming Catholic” with a long standing commitment to ecumenism and a deep heart for the Presbyterians among whom she finds herself. For fun, she loves theological debates, good food, dogs, and the chance to watch things growing in her garden.

The Art of Pastoring a Post-Split Church

The NEXT Few Minutes
Scroll to top