We are launching a new series this month that highlights participants at the national gathering in Charlotte, North Carolina on March 4 – 5th, 2013. Presenters, preachers, teachers, and leaders were asked the same five questions and their thoughtful responses may be found here every week. The goal is to introduce you to people you’ll hear from in Charlotte and prime the pump for our time together. Hopefully, something here will spark an idea, thought, or question for you. We encourage you to reach out and initiate conversations that you can later continue in person. So without further ado … 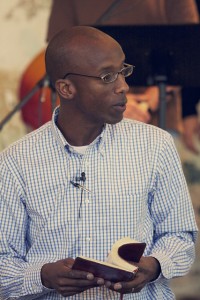 Amos was born in Ethiopia and immigrated to the United States with his family in 1983. Downtown Columbia was the first neighborhood that they called home. Twenty-nine years later, Amos and his wife Sarah are Downtown again to help organize a new Presbyterian (U.S.A.) church in the city center of Columbia. Amos and Sarah went to Presbyterian College. She graduated on time (a detail she can’t seem to forget) and Amos finished up a few months later in 2001. After college, Amos went to Brazil to work with street children, made a small fortune working on a government contract, managed to spend it all while killing time in Clinton SC, and eventually completed his graduate studies, on time, at The Divinity School of Wake Forest University in 2006.

I’m the organizing pastor of a new Presbyterian church in downtown Columbia. While we meet downtown, our congregation comes from all over the city. Our ministry doesn’t have a geographic focus. Instead it’s oriented towards people who work, eat, learn, and play downtown.

New church development is the most obvious and literal example of the church that is becoming. Given the opportunity (and freedom) to reconsider what is barely necessary to be a church, has been liberating for us. Now there is room to “become” something. In the past we might have worried about what must be sacrificed first

– Since I’ve never been before, I don’t know what to anticipate. This is kind of like the future for the church. We Live, We Serve